Alley Oop's adventures in Moo had proven quite a success. It turns out a good-size portion of the population wanted to followed the misadventures of a brave and bold caveman as he comically battled for safety and resepct from dinosaurs, his fellow man and his fellow women. Ooola in particular was the cave doll he doted on and one day he and she were popped through time into the 20th Century by way of a time machine built by Professor Wonmug. When that happened Alley Oop the comic strip became even more popular, because now the whole of history both factual and fanciful was open territory for the creator V.T. Hamlin.

The Library of American Comics Essentials - Alley Oop The First Time Travel Adventures volume published by IDW chose the dailies when Alley Oop became a modern cave man began waltzing through time and space as just that, essential.We have nearly three hundred and fifty pages of daily strips here begining in the mythical prehistoric land of Moo and quickly rushing into the modern world, and then back into time once again as Alley Oop, Oola and Dr. Bronson (a historian with a yearn to see it for himself) jump into the sack of Troy and later into the pages of Homer's The Odyssey.

In these quickly-paced black and white pages we see Alley Oop outwit modern men, battle a locomotive, take a plane ride, and then in the shadow of the city of Troy battle Ajax and woo Helen. Oola arrives and the Greeks think her the goddess Minerva and she doesn't disavow that instead using to help her find a lost Bonson and Alley Oop. 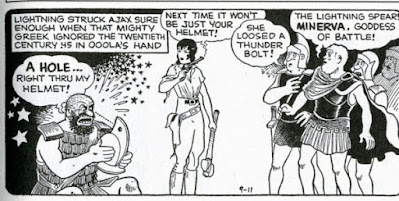 As much fun as Alley Oop is in these strips, it's Ooola who is the revelation. Alley Oop is somewhat bewildered by the modern world, but Ooola groks it immediately and in fact cottons to it wearing modern clothes and packing a pistol to boot. She's a no-nonsense woman who demands as much as she allows and in a comic strip from 1939 that's a bit of a revelation.

The story concludes just as Alley Oop, Ooola, and Dr. Bronson have finally left Ullysses having confronted the Cyclops, Scylla and Charybis, Circe and the Sirens too (who are hilarious by the way) and we see a new character named Dr. Oscar Boom join them as they look to confront the Amazons with Hercules tagging along. It's great great stuff from a bygone era.
Rip Off
Posted by Rip Jagger at 1:00 AM