Dojo Classics - The Devil Is In The Dinosaur!

Devil Dinosaur is one of Jack "King" Kirby's weirdest offerings. Coming late after his return to Marvel in the Bronze Age, this wacky tale of a pre-human cave-boy and his amigo, a mighty T-Rex is at once bizarre fantasy and oddball allegory. Moonboy is a youthful protagonist who is separated from his tribe the "Small Folk" and finds a baby Tyrannosaurus Rex who has ferociously fought off raiders dubbed the "Killer Folk" who have annihilated his whole brood. A fire causes the T-Rex's skin to turn a fiery crimson and so he gets his sobriquet of "Devil Dinosaur". Moonboy and the Devil inexplicably bond and are able at some basic level to communicate.

They revenge the death of Devil's "family" when they confront the giant spider god and see to it that the prehistoric raiders who were responsible meet a properly grim fate.

They battle a giant caveman who proves a rival to Devil himself, but find some level of peace in this encounter.

And then things really being to heat up when aliens descend from outer space and start herding up biological samples into their spacecraft. Moonboy and Devil Dinosaur become separated when Moonboy is captured and Devil must make other allies to battle against the alien threat.

This story continues when Devil and his new allies Stone-Hand and an Elder make use of giant ants to battle the aliens, to a very large extent defeating them and saving the creatures they captured.

Then the allegorical aspect of the series, already hinted at in places comes fully to the fore when an ersatz Garden of Eden is established by a remnant of the alien technology (which remarkably resembles a tree) and Stone-Hand and his newly acquired "mate" Eev find themselves held captive within. The garden is a mixed blessing as it offers lush sustenance but limited liberty.

Then Devil invades this "Eden" and things change pretty dramatically. I won't spoil it.

For the final two stories in this brief series, we get Devil and Moonboy battling against cave-dwellers who have "domesticated" dinosaurs as steeds.

And Devil finds his way into the future world of 1978 when he falls into the magical pit of a witch-like crone. Needless to say that Devil finds plenty to do in his brief stay in the "modern world".

All in all, the Devil Dinosaur series is a hoot and a half, full of riotous action and some of the absolute best two-page spreads in Kirby's illustrious career. The lush inks are by Mike Royer. See below for some wild examples. 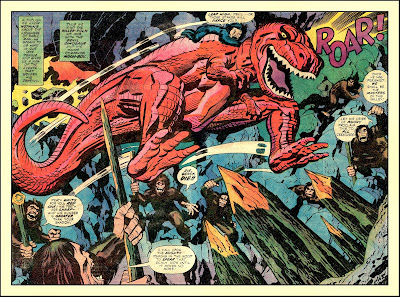 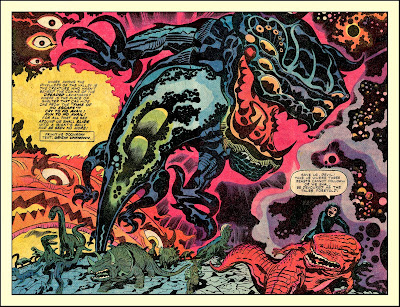 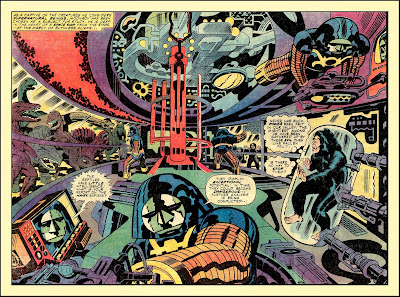