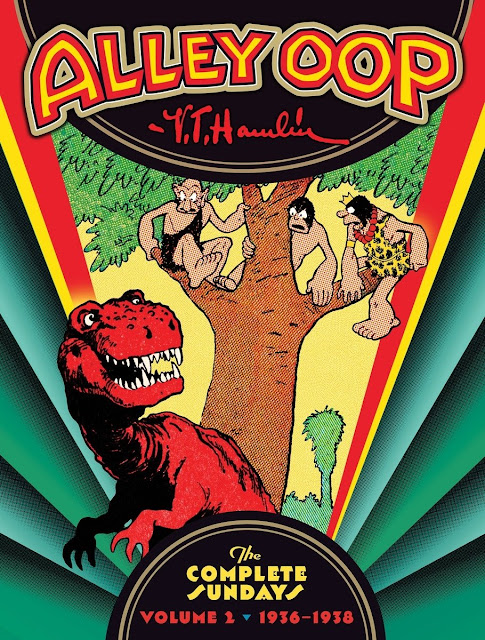 The Alley Oop Sunday pages really seemed to gel nicely in these years with continuities running several weeks and not missing a beat. Unlike some funnies which are understandably rich with reminders about the story to date, these are not and that makes reading in in a collection like this. Alley and his friend Foozy spend much of this tome on the outs, first feuding over their business interests and later over recognition for their gifts. Alley Oop is notably for his forthrightness and his strength while Foozy is more a man of the mind which is revealed by his incessant talking in rhymes. Much like Alley and Dinny, Foozy is able to tame Terry, a Petordactyl for his his use as flying steed. 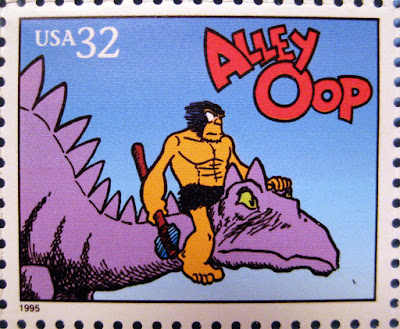 There's quite a bit of soft commentary on modern daily life in the strip with the seeking of wealth a common theme and I'm sure one which resonated in these later years of the Great Depression. Fun and entertainment are on tap as well when a projected zoo is transformed into a traveling circus complete with prehistoric wagons pulled by Wooly Mammoths. The circus story is followed by one in which the crown jewels of Moo are stolen and Alley and Foozy are both instrumental bringing them back, though by different means. Alley does a stint as the local law officer, but it's fundamentally against his nature and he soon enough relinquishes the post. 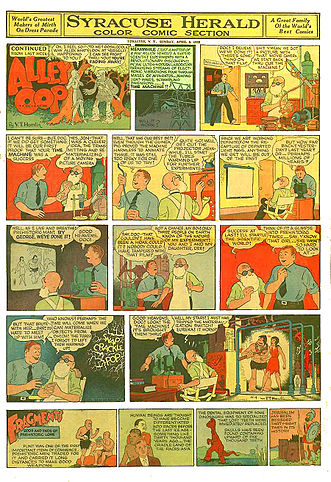 In fact it's a newly freed Alley Oop who bids farewell to Foozy in a later Sunday as the latter flies away and then with more time to focus his attentions. Alley begins to spend some time with Ooola. They are together when suddenly the strip changes its entire focus as a Professor Wonmug's time machine snatches the couple and whips them into the 20th Century. We get a few pages with Alley trying to figure out this strange new world, but there's no doubt with all of time now available, V.T. Hamlin will not waste time using the opportunity.
That's the focus of the next Sunday Funnies.
Rip Off
Posted by Rip Jagger at 1:00 AM