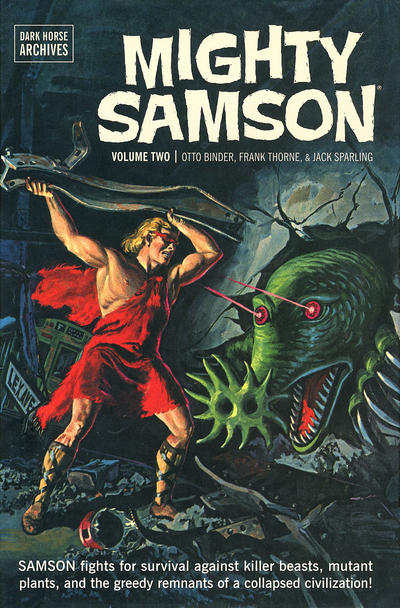 Frank Thorne, the celebrated comic book artist is dead. He passed away this past Sunday as did his wife Marilyn of seventy years. He was ninety at the time of his death and he left behind a remarkable body of comic art. He was the the creator of Ghita of Alizar, a very sexy warrior woman in the style of Red Sonja, a character he worked on with great aplomb for Marvel Comics. Thorne's mainstream work includes Mighty Samson for Gold Key and I dedicate these posts on the vintage Gold Key series to Thorne. 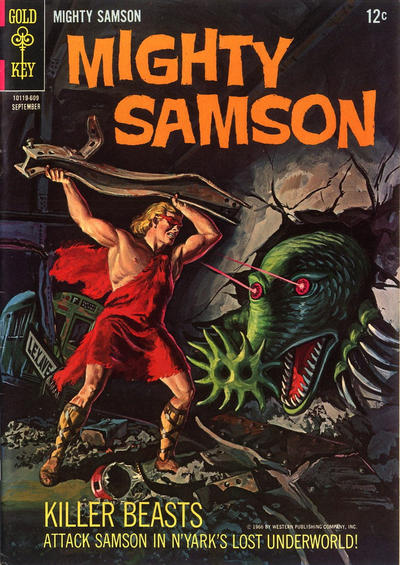 The first Otto Binder story in this collection and alas the last one drawn by Frank Thorne takes Samson, Mindor and Sharmaine into the underworld beneath the apocalyptic New Y'ark city where they find a race of humans called the Undermen. It is at first believed that the Undermen are sinking the buildings of the city, but Samson discovers that the culprit is in fact an enormous mole monster, in fact an entire mob of such creatures. But thanks to Mighty Samson, the threat is averted and the survivors of both worlds are left in relative if not long-lasting peace. 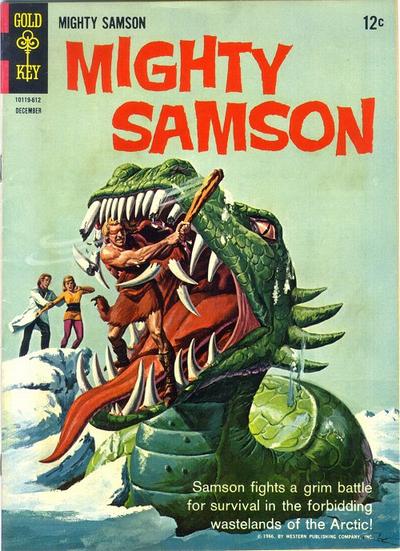 The eighth issue of Mighty Samson marks the debut of Jack Sparling as the new artist on the series. Sparling has always been an artist I fight to like. He has a very scratchy style and was a workhorse for sure, but his storytelling can be spotty at times. Here he draws Binder's tale of the people of New Y'Ark answering the siren call of a radioactive mountain located in the deeps of the Arctic. Like lemmings the humans from all around the Northern hemisphere are drawn to this object until Samson with the help of Mindor is able to break the spell with his power, after the latter rediscovers the formula for gunpowder and uses that to blow up the offending rock. 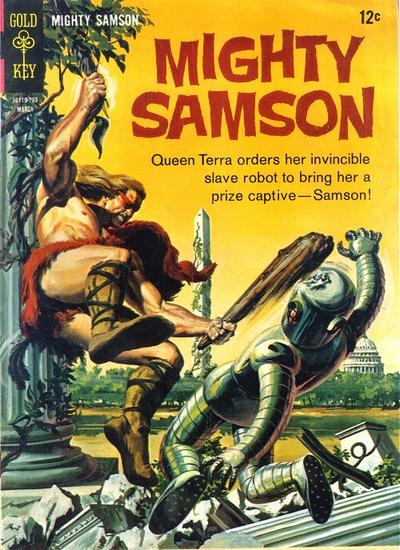 The ninth issue features a trip to the ruins of Washington DC as Terra of Jerz returns this time using an exceedingly powerful robot once used to protect the President of the United States. Given that JFK had been assassinated only a few years before this comic hit the stands, such an idea carried no small power for even younger readers. Samson is able to finally defeat the relentless robot, but only after battling for a long time and eventually dropping it from the top of the Washington Monument. 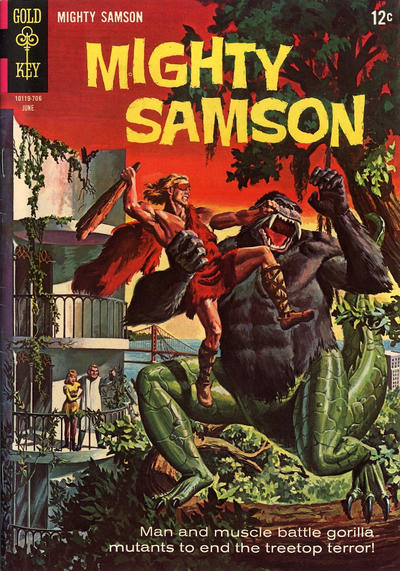 Back in New Y'Ark another old villain returns when King Kull and his henchmen return., They have taken over the high rise society on what was once Staten Island and look to consolidate their power to take over all of New Y'Ark. The biggest threat though is the "Gorillasaurus" which roams the forests surrounding the high rise settlements. A new feature appears alongside the regular Samson stories -- one page items describing some of the mighty monsters which have shown up in the strip over the early issues. 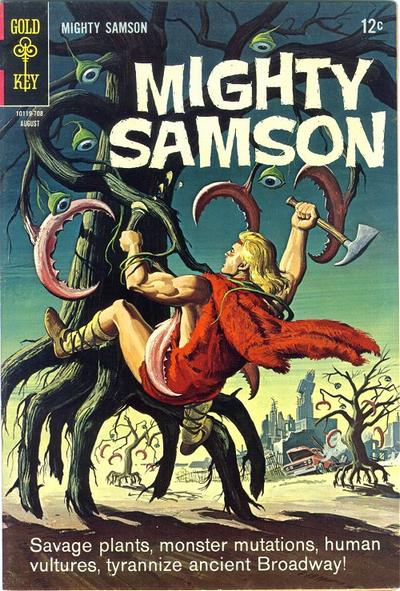 An insight into the complexities of trade is given in the eleventh issue when traders called "Swappers" bring food to the denizens of New Y'Ark and suddenly begin to ask exorbitant recompense. The food produced by farmers on the other side of a dark and forbidding forest who are themselves being gouged by these Swappers. Samson and Mindor work to clear "Broadway" so that a more direct arrangement can be made between the producers and the consumers cutting out the greedy middle men. But deadly sentient trees make the work very difficult. 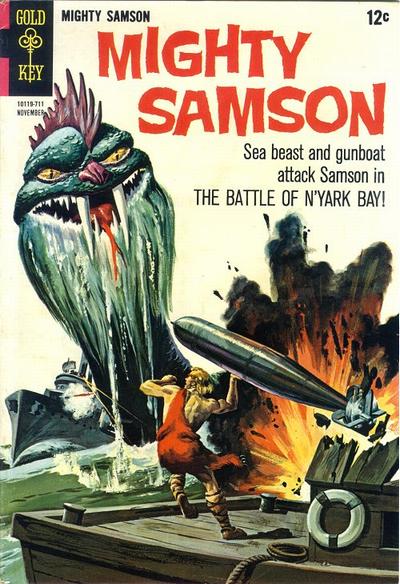 It's a battle on the waters around New Y'Ark as the wannabe "Queen" Terra of Jerz finds and brings back into operation a vintage gunboat. Samson, Sharmaine and Mindor have just boarded the Queen Mary which in the Mighty Samson universe never left for Long Beach California to become a resort of sorts. The fighting is furious with Samson chucking torpedoes and dodging cannon shot as well as the occasional sea monster to defeat Terra once again and send her limping back to Jerz. 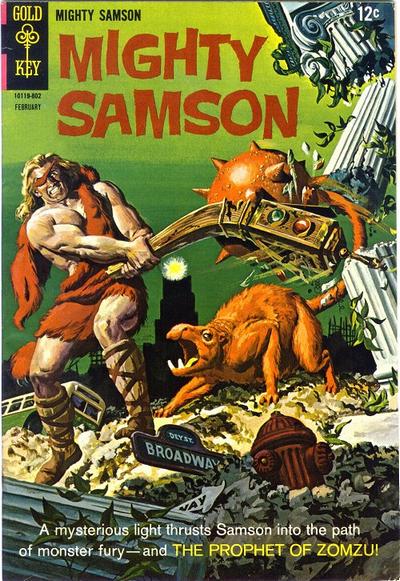 Superstition gets the skewer in the thirteenth issue of Mighty Samson. A supposed mystic named "Merlyn" invokes a god he calls "Zomzu" and ascribes various miracles to this newly discovered deity. In fact Merlyn has uncovered plans to New Y'Ark's immense electrical grid and is using his knowledge of electricity to fabricate his miracles and woo the superstitious of New Y'Ark. Mindor catches onto his scheme and helped by Samson concocts his own counter-miracles to break Merlyn's spell of the populace. It's sad that Mindor discounts telling the people the truth as he regards them as too ignorant to understand it. 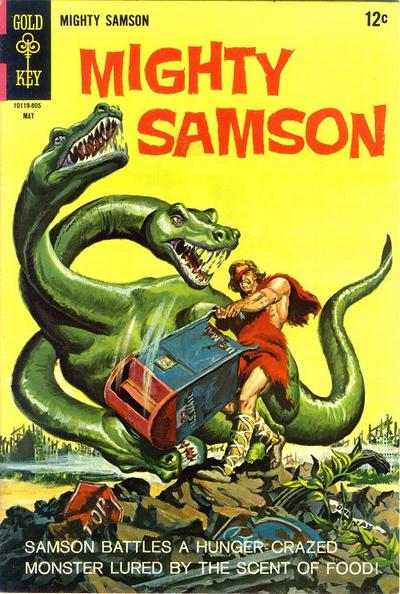 Wrapping up this second volume of Mighty Samson is the fourteenth issue which by page count is much shorter than the comic that opened the volume. Pages have been trimmed and it has made the stories read much more swiftly with fewer digressions. Sometimes that's a good thing, but mostly not. In this story the trio led by Mindor get on a boat and track a deadly oil spill down the Gulf Stream to what was once Florida. There they find the "futuristic" city of "Technopolis" which was filled with automated factories and which for some reason has kicked back on. As with most devices in Samson's world machines are powered by nuclear power and even after stopping the spilling oil by removing its battery, the trio find themselves under attack both from the native population and the city itself. Eventually they stopped the city's operation and are able to head back home where the waters have cleared up at last. 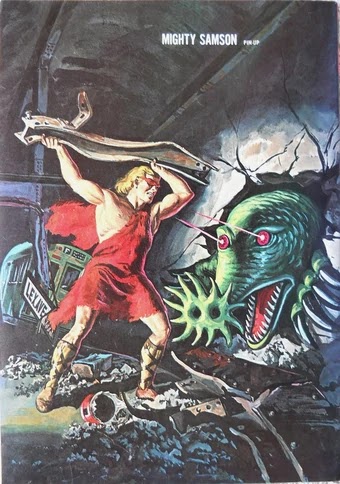 All of the comics in this run feature great covers by Morris Gollub who on that final issue chose to give the monster two heads instead of the three from the story. There's no doubt that despite the drop off in art quality inside the book, the covers remains highly evocative and tempting indeed.
More Mighty Samson next week.
Rip Off
Posted by Rip Jagger at 1:00 AM