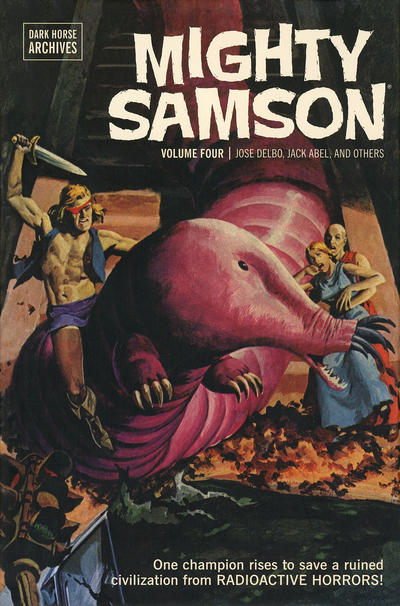 The fourth and final volume of Gold Key's Mighty Samson from Dark Horse captures the remaining issues in the run of this venerable comic book. The issues are from the '70's exclusively and none of the original creators on the book such as Otto Binder, Frank Thorne, nor Jack Sparling have anything to do with the book at this point. The guiding talent seems to be Jack Abel, but he is far from alone. 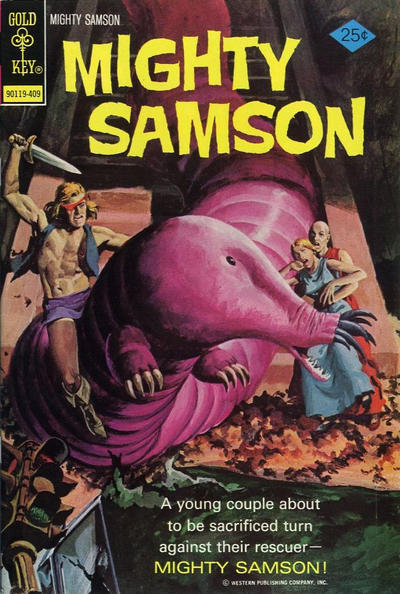 The twenty-fifth issue kicks off things with a story about a giant mole cult which devoutly believes that the sacrifice of two of their own will ensure the resurrection of their deadly god. It's all Samson, Sharmaine, and Mindor can do to save two lives in this story drawn by Jose Delbo underneath an action-filled George Wilson cover. The writer of this yarn is unknown. 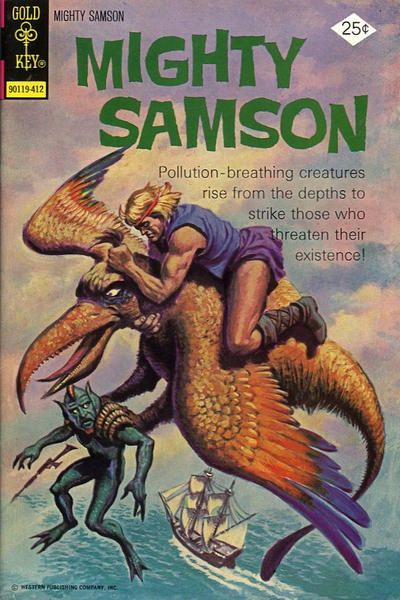 The next issue, also drawn by Delbo and again with an unknown writer tells of a tribe of underwater people who have adapted to the polluted waters they thrive in. They are dangerous to outsiders until Samson and his friends assist them in fights against giant sea monsters and enormous pelicans. 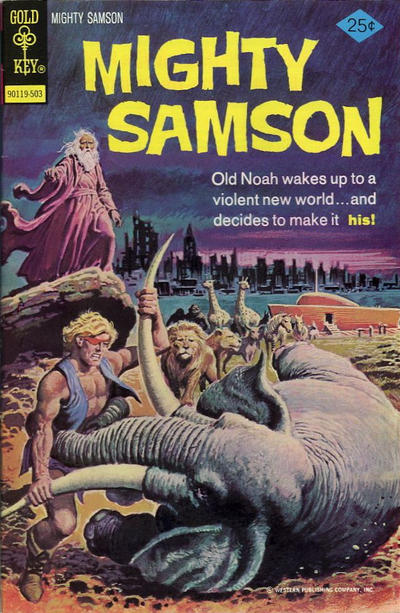 The story of Noah's Ark is reprised in this weird story of normal animals suddenly appearing in New Y'ark. It turns out a madman named Noah Caine actually built an ark and salvaged many species before the nuclear war and they were preserved in cold storage until the moment was right. Sadly that moment had not arrived and the animals respond to the changed environment by undergoing extreme mutations almost immediately. The art this time is by Jack Abel with Jose Delbo inks, and sadly again the writer is unknown. 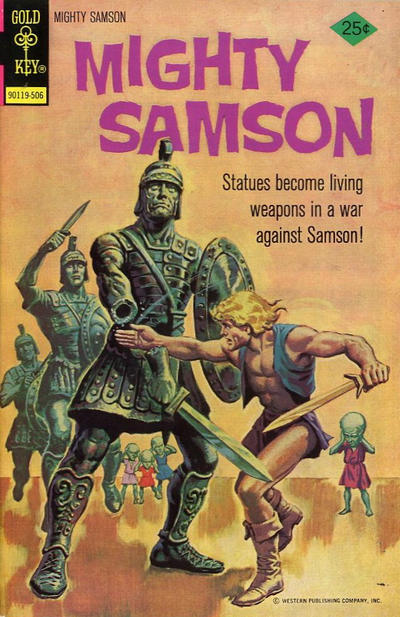 The twenty-eighth issue of Mighty Samson is interesting to me especially because it is the very first issue of the run I actually bought off the comics rack myself. It features a story by Paul S. Newman with art by Jack Abel about a tribe of dwarves with enormous brains who are able to control the other tribesmen around them to such a degree that they supply the small men's needs. In addition to telepathy they are telekinetic and used this ability to animate statues and armor to protect themselves. It's all Samson and the gang can do to survive this one. 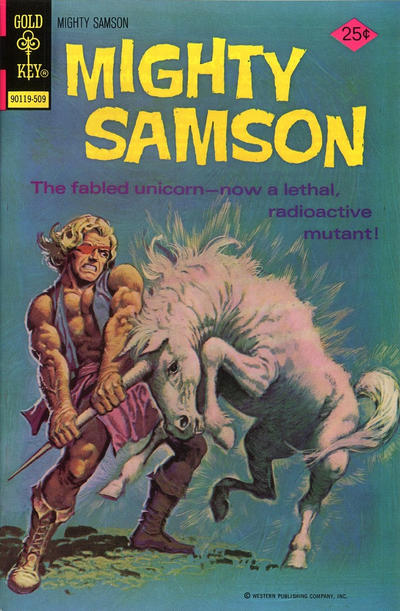 The very next issue is a dandy and is again drawn by Jack Abel and written by John Warner. Sharmaine is the center of attention when she and Mindor and Samson find a small "barony" of sorts in which a medieval power structure has been established. The leader of this tribe wants Sharmaine to be his bride. The myth of the unicorn is evoked and Samson is missioned with capturing a beast that resembles one of the classic beasts, but it turns out this one is deadly with radiation. When the beast is finally defeated the Baron grabs hold of the horn to gain power but is killed instead. 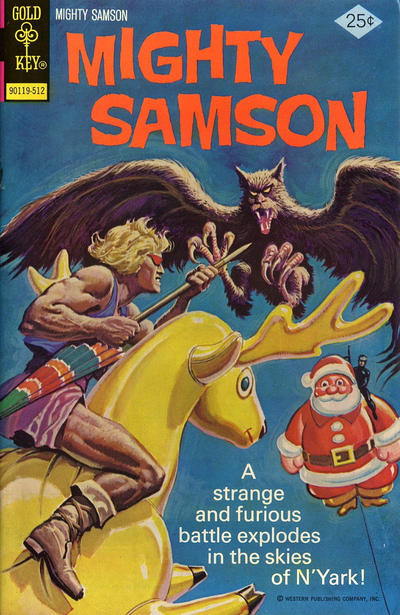 In one of the weirder stories again drawn by Abel but this time written by Arnold Drake, the post-apocalyptic trio find a tribe thriving inside Macy's Department story and worshipping a balloon of Bullwinkle (though he's never named). It's a wacky tale and before it's over many of the familiar balloons from the famous parade get airborne. The mutation of the story is the "Dawgeon" and impossible blend of pigeon and dog. Terra of Jerz shows up as well as she has a trade going with the folks of Macy's for batteries. 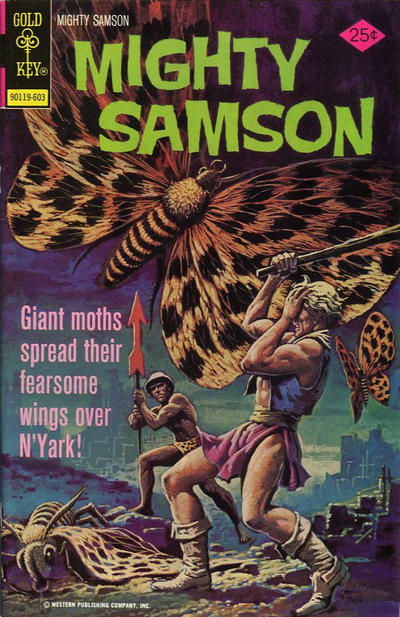 The last regular issue of Mighty Samson features a story about giant moths who hatch in the distant Hollywood  and proceed to eat their way to New Y'ark finally showing up in "Har-Lem". This one features a black tribe and more than a few uncomfortable cliches. This tribe is led by "Satchmo" and they hold "Joe Louis" events which are fights to solve disagreements. Samson is forced to participate but the forces work together when the dealy moths appear and begin to savage the area. This is a story with no identifed writer but does feature Jack Abel artwork. George Wilson is again on the cover art as he has been through all of the comics so far. 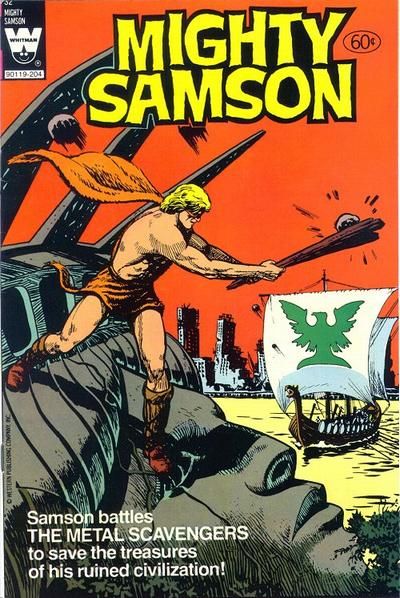 That changes with the thirty-second and final issue of Mighty Samson when Dan Spiegle is tapped to draw a cover which imitates the painted cover of issue four by Mo Gollub. The Dark Horse colleciton does not identify Spiegle but it's almost certainly his work. The story of metal searching "vikings" is reprinted as well. This issue dropped onto the stands in 1982 at least six years after the last one had arrived. 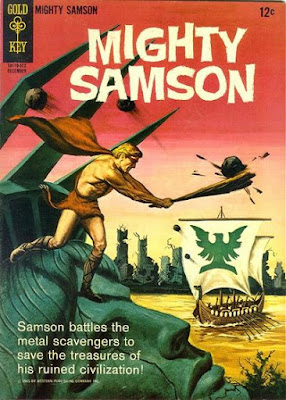 But between the last two Mighty Samson comics was Gold Key Champion and in the second issue a new Mighty Samson story appeared in 1978. 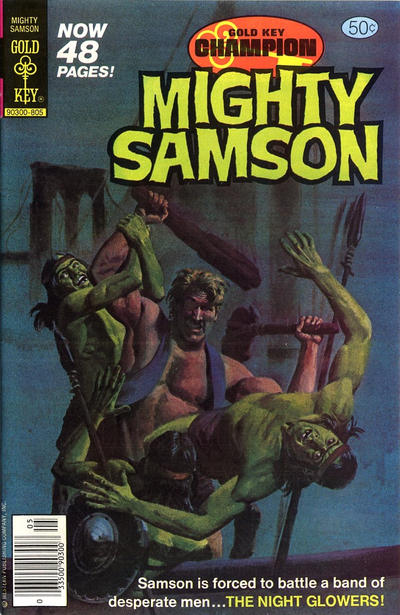 Again the writer is uncredited but Don Heck is the artist of this story of a tribe of glowing people who seek the help of Mindor and his friends to discover the nature of their malady. They trade with a savage tribe who live on what was once Coney Island and they trade for batteries which they then trade to Terra of Jerz for goods they need. It turns out an operational x-ray machine near the site of the battery cache causes the deadly glow. With the problem identified and with Samson having put down the resistance of of the weirdly dressed tribemen of Coney Island the series comes to a close at long last.
I wish that Mighty Samson had featured less fanciful creatures as the nuttiness of the beasts while valid as curiosities undercut the sense of any real threat. Many of them are just too goofy. Much better were the tribes that Samson, Sharmaine and Mindor discover, especially in these later issues which explore in more detail the land of New Y'ark. Mighty Samson ain't great science fiction but it's sure fun science fiction.
Note: There is one final Mighty Samson post coming out later today.
Rip Off
Posted by Rip Jagger at 1:00 AM