Godzilla Vs. Gigan - The Criterion Collection! 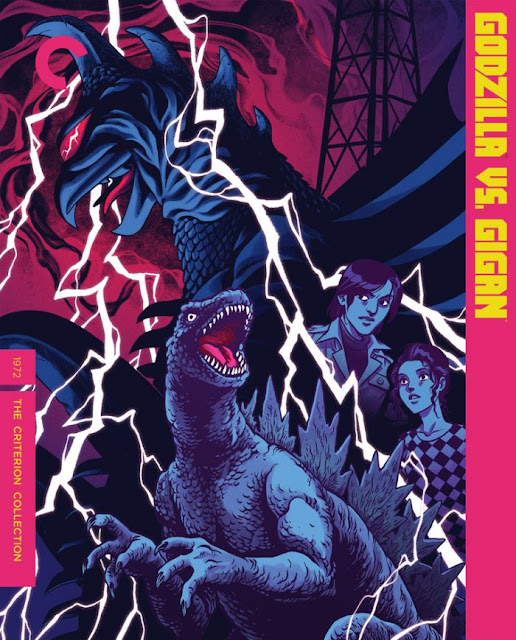 As the Godzilla series entered the 1970's the dynamic in the movie industry had changed considerably. Television had taken a huge chunk out of the audiences and that meant that expensive flicks were much less likely to get a green light. Either that or once expensive movies had to figure out a way to get finished more cheaply. The Toho Studio solved this equation in 1972's  Godzilla vs. Gigan (also released as Godzilla on Monster Island)by recycling the special effects scenes and hiring less impressive casts. The former we see plainly but the latter was actually a refreshment for some of the classic sequences which had gotten a tad hoary over the years. This movie is intended to be a return to the classic model, but that was tough given the limits. But it's not a bad film to watch I think. 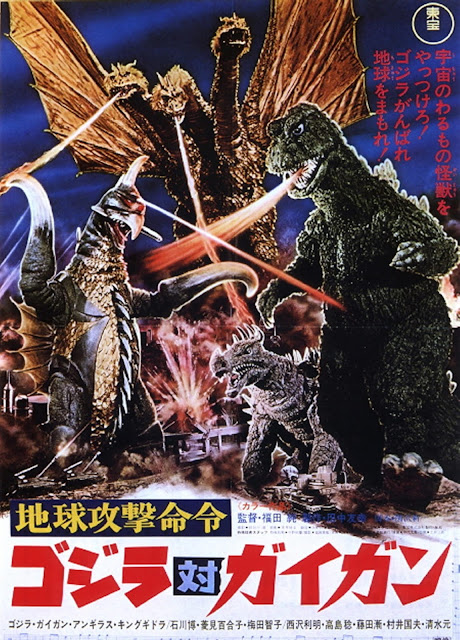 Godzilla in this movie does get a lot more screen time than he had done in some of the latter 60's flicks and in point of fact due to a plot element which called for a tower built by the invading cockroach-like alien which looked just like Godzilla (for an amusement center supposedly) the "King of the Monsters" is on screen a lot, even in the sequences involving he human story. The humans are battling the aforementioned aliens who are using King Ghidorah and the buzz-saw bellied Gigan to take over the planet since their last one was overcome with pollution. (So that theme carries on.) The heroes are youngsters of various kinds (a comic artist, his black belt-wearing sister, a young woman seeking to free her brother, and her friend the obligatory nerd). They are a likeable group just as the villains are suitably easy to dislike. 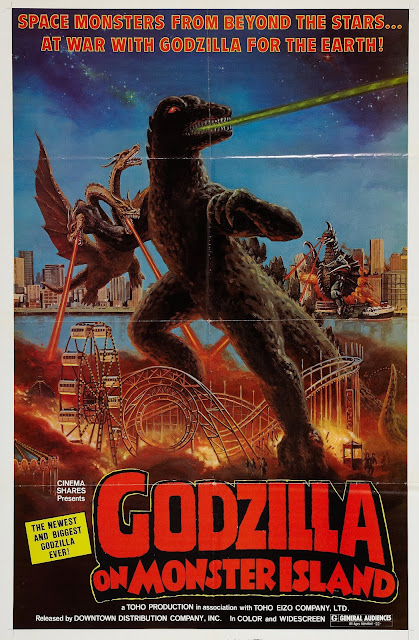 Godzilla and his buddy Anguirus leave Monster Island to save mankind and we know this because they talk. In a weird move their "speech" is captured in word balloons. One of my favorite moments is when a line from Anguirus is not translated after Godzilla has told him to hurry several times in a row. I assume Anguirus said something he shouldn't have. These two face off against Ghidorah and Gigan and the fight is perfectly okay with some blood spilled here and there. Eventually Godzilla wins the day and the aliens are sent packing as their scheme and the Godzilla-looking tower come crashing down.
Believe it or not it's going to get weirder.
Rip Off
Posted by Rip Jagger at 1:00 AM