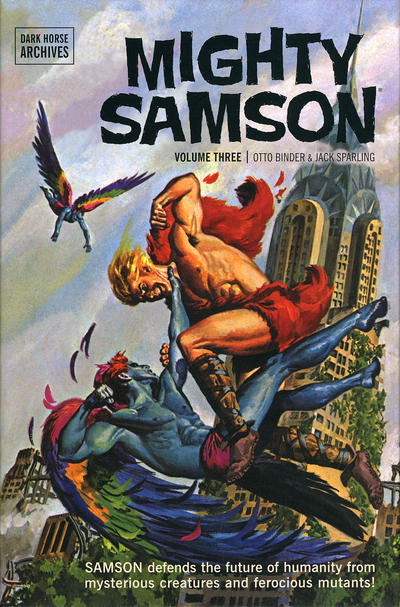 Mighty Samson had apparently proven to be a sturdy seller for Gold Key even after the loss of Frank Thorne as the artist. Jack Sparling was an artist from the Caniff school of drawing and that meant he made decent use of blacks to bring effect, but alas his creature design was wanting in many of the issues. It's easy to pick apart the science fiction aspects of the series, an atomic war which results in a ruined New York City which can still yield canned goods and working machinery wouldn't allow enough time to have passed for the profound mutations which run rampant on the land, in the sea, and in the air. Many of the mutated "monsters" are offbeat crossbreeds of types of animals which could never have mated in any capacity. But that is the whimsy of this world and paying too much heed to the requirements of science will only make the reader unhappy. The key is to revel in the splendid storytelling. 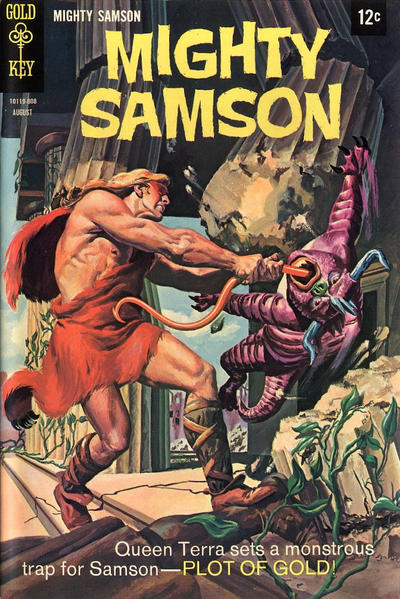 The collection begins with the fifteenth issue in which Terra of Jerz returns yet again to make life difficult for Samson and company. But this time her scheme shows some savvy as she is attempting to introduced a coinage system which will make trade much easier just as currency does in this real world. Taking a page from the Roman Empire she makes sure her face is stamped on her new coins. Though this is arguably not an evil plan, Samson, Sharmaine and Mindor nonetheless uncover her cache of precious metals which turns out to be the United States Treasury in the center of New Y'ark, long abaondoned and forgotten by most. The weirdest creatures they battle is a some mole-like critter which can shoot out soapy suds. 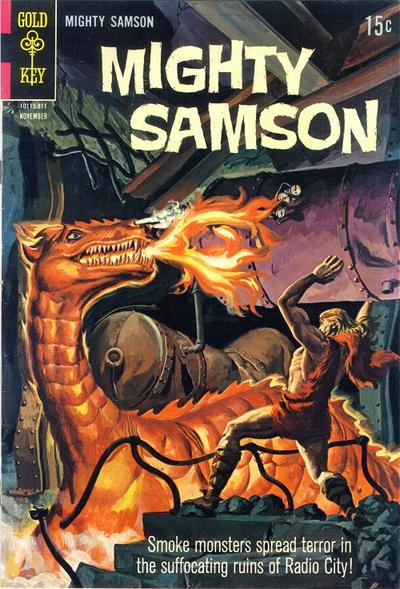 The next issue pits Samson and the gang against the "Gnarly Men" who live atop Radio City, isolated from the rest of New Y'ark by the self-contained tunnel system. These Gnarly Men made use of some powerful beasts to fend off Samson when goes there to protect his allies the Undermen who have been attacked by the Gnarly Men. There's a enormous gator and an actual fire-breathing dragon of sorts. 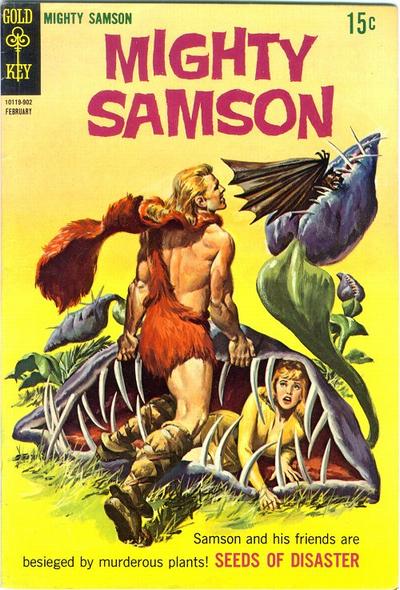 Terra of Jerz returns again, this time bearing deadly seeds which create a range of plants meant to bring her enemies to their knees. Investigation proves that the seeds are from a vibrant agricultural society atop buildings in the lower east side of New Y'ark, and that the folks who produce a wide range of plant life are not threatening at all as long as those they deem "groundlings" stay away. Terra's schemes of course fall apart and it's up to Samson to save the day when she falls victim to her deadly plants. Perhaps the weirdest creature in this story is a thing called a "Bone Beast" which is a walking four-legged skeleton. 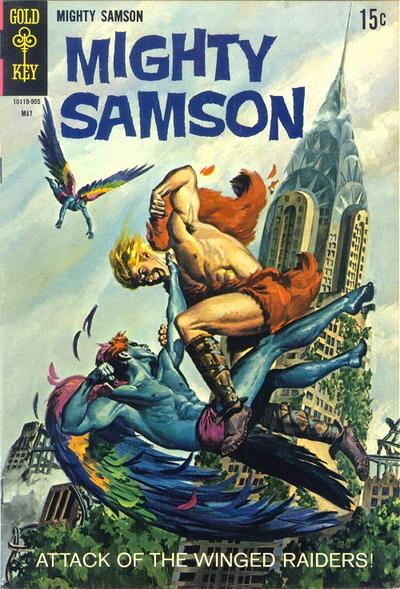 Some of Sparling's most arresting work came in the story titled "The Winged Raiders" for the eighteenth issue. Winged men descend upon New Y'ark and one of them named "Hawkaar" cottons to Sharmaine in particular. So much so that he betrays his leader and tribe who live atop the distinctive  Chrysler Building. The blue skin of the flying people are vibrant and add some depth to Sparling's increasingly loose artwork. 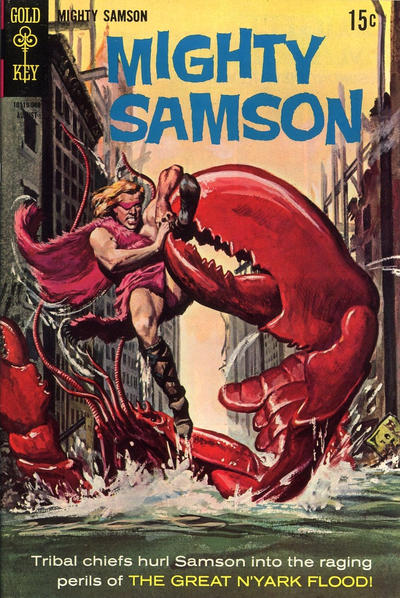 Otto Binder begins his last Mighty Samson story in issue nineteen and it begins right in the middle of the action as a tremendous flood has overtaken the broken down metropolis of N'Yark. Samson spends nearly all of this story apart from his friends Mindor and Sharmaine who are struggling to deal with the flood waters themselves. Rather Samson constructs a mighty raft capable of carrying hundreds of survivors. It's a fragile creation is subject to much pressure from creatures under the water and it takes all of Samson's might to keep it afloat. But his decision to look for Mindor and Sharmaine makes him unpopular and he is unceremoniously kick overboard. He does find his friends but the flood waters are still raging as the story ends. There is a terrific snafu in this one as an unmutated pelican is suggested to have batwings, but appears in Sparling's art to be normal. There's a ramshackle quality to both the art and the story frankly. 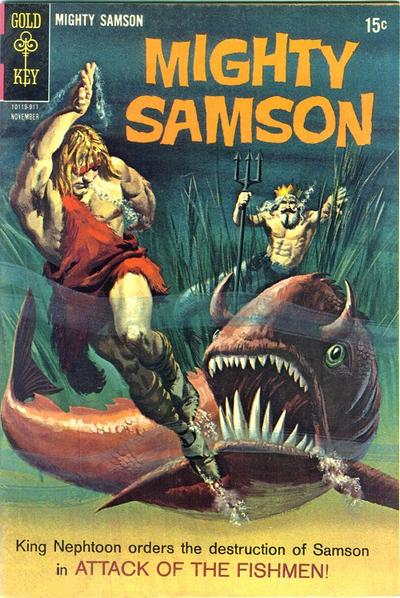 Binder's final tale picks up where the last issue from 1969 left off and as the flood waters in New Y'ark still keep the populations in peril, a new threat shows up in the form of mermen led by a craven king named "Nephtoon". This underwater people have dammed the waters in such a way as to keep the flood high. The story is a little hard to follow frankly but there is much folderol above and below the waves before Samson is finally able to grab hold of King Nephtoon and hold him hostage against the rest of the underwater tribe giving up their designs on the city and the dams are undone. The city finally drains, but it is a muddy world indeed that Samson, Sharmaine and Mindor find themselves in as the saga concludes for many years to come. 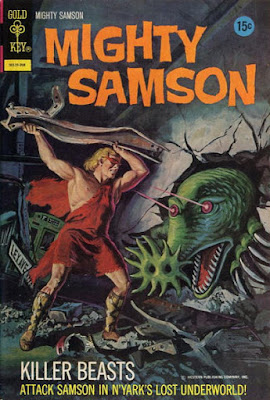 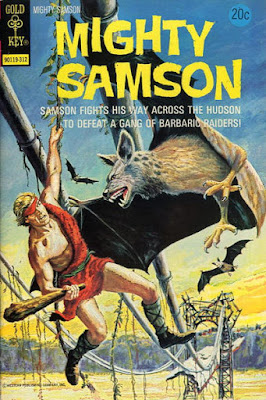 The twenty-first and twenty-second issues of the series reprint Mighty Samson seven and two respectively. It's a somber end to a series which had managed to cling to life for five years. But all was not done yet, though when the series would return alas Otto Binder would not be involved in any way. 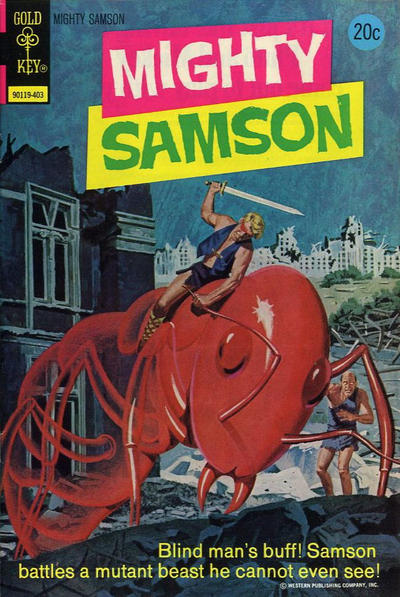 It would be five years until the next issue of Mighty Samson hit the comic racks and the most remarkable thing is the price hasn't changed. According to some source I read it was the success of the Star Trek comic which prompted Gold Key to revive some of their sci-fi properties and Mighty Samson got the nod. The twenty-third issue featured artwork by Jose Delbo, a seasoned veteran and writing by Jack Abel. I associate Abel more with his feathery inking style than writing, but his bring back of Samson is a reasonable success. Samson, Sharmaine and Mindor find a tribe of genetically blind people who are psychically able to find food who led by a wise old man about to die. Sharmaine seems to be elected to take his place but circumstances are such that his estranged brother who led another tribe takes up the mantle when differences are solved. The giant ant on the cover is invisible inside the comic but able to be seen by the infra-red sensitive people of the tribe. Samson and Sharmaine get a makeover due to her wishing it so and finding fabric to fashion new garments. Gone is Samson's lio-bear pelt and he now is sporting a more colorful vest and tunic. Sharmaine doffs her colorful costume but rewards the reader with hot pants. 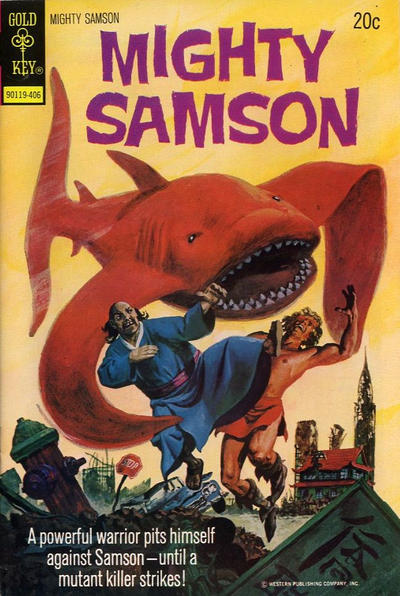 The writer of the last issue in this volume is unknown but Delbo is back on the art chores. George Wilson supplies the covers for all of the issues in this tome. The story this time showcases the future's look at Kung-Fu which was a fad in the 70's. Samson runs up against a potent fighter named "Chang" who is more skillful than Samson. The two are pitted against each other by the leader of this Asian tribe who turns out to be Terra of Jerz. But her dishonorable ways cause the tribe to reject her and Chang assumes the leadership. The flying shark is called an "Eagark" for heaven's sakes.
These last two stories seems to have a less sweeping feel than the earlier 60's material which frankly was contradictory in the way it presented New Y'ark. The trio seem to be exploring the city and are not quite so prone to jump across country. It makes the stories more intimate and presumably a fuller and richer New Y'ark is being developed. But that remains to be seen in the fourth and final volume of Dark Horse's Mighty Samson which drops this same time next week.
Rip Off
Posted by Rip Jagger at 1:00 AM