Godzilla Vs. MechaGodzilla - The Criterion Collection! 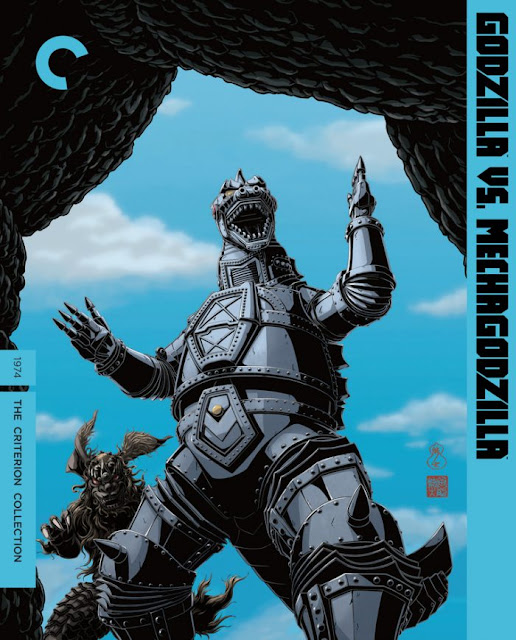 I do believe I saw the American version of this movie called Godzilla vs. Cosmic Monster in the theater, but I'm not at all certain. But no doubt it was one of the earliest movies starring Godzilla I ever owned thanks to a relatively cheap VHS copy, though I was happy to at long last get a better version in the Japanese original. Godzilla vs. MechaGodzilla is a much better movie in my opinion than it gets credit for generally. There's a prophecy that a given certain signs such as a dark mountain in the sky and a red sun rising in the West monsters will rise both to attack and to defend the Earth. As the movie progresses we see these prophecies fulfilled in prosaic ways but nonetheless we eventually end up with MechaGodzilla in battle with Godzilla and a new monster named King Caesar, an ancient entity who looks like a Shisa dogs which are legendary guardians. I actually own a pair, given to me long ago by a close friend. I cherish them because of the source, but also because when I look at them I think of this movie. 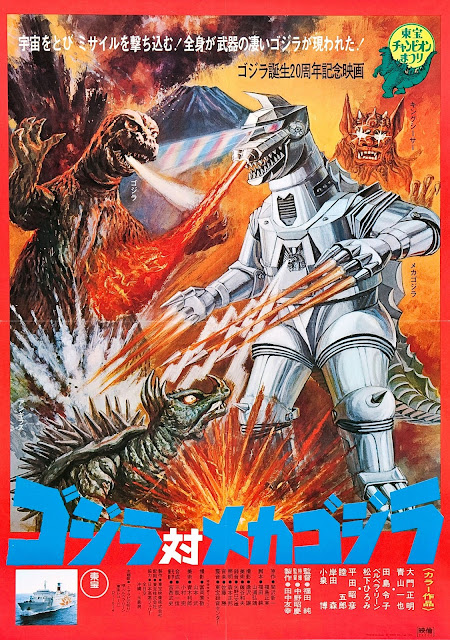 Godzilla in this movie is presented in a few ways. When MechaGodzilla first appears it is disguised as his inspiration. The aliens who operate him seek to undermine the confidence of the humans who have come to see Godzilla as a defender and by unleashing their creation they make him appear savage once again. And it's a focused attack, though if you listen you realize that's not Godzilla's roar and eventually when Anguirus fights him we begin to feel something is not right. A tears later when a second Godzilla emerges and we see the shiny metal. Soon it's a battle between the robot and the real thing and it's a doozy which Godzilla appears to lose. All the while this going on of course aliens and humans are battling it out, but always the focus is on what will the monsters ultimately do. This is a movie in which the tie between the humans and the monsters is  quite close. Eventually a priestess sings for her god King Caesar to join the battle and he does to good effect. 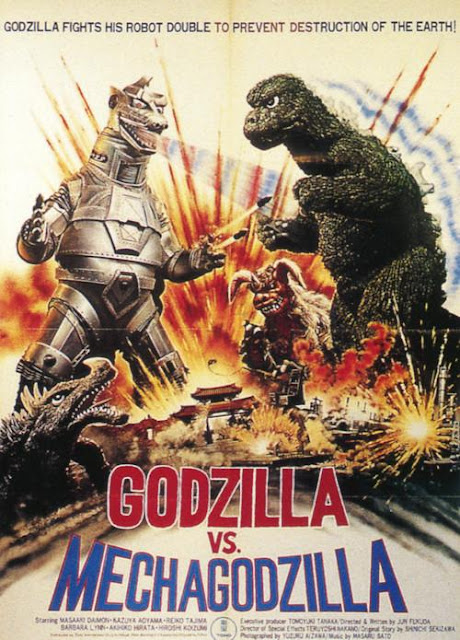 I really enjoy this one, despite what some say are defects in the plot and a lack of motivation of the characters. I guess I'm just not as discerning as others. MechaGodzilla does return of course.
Rip Off
Posted by Rip Jagger at 1:00 AM