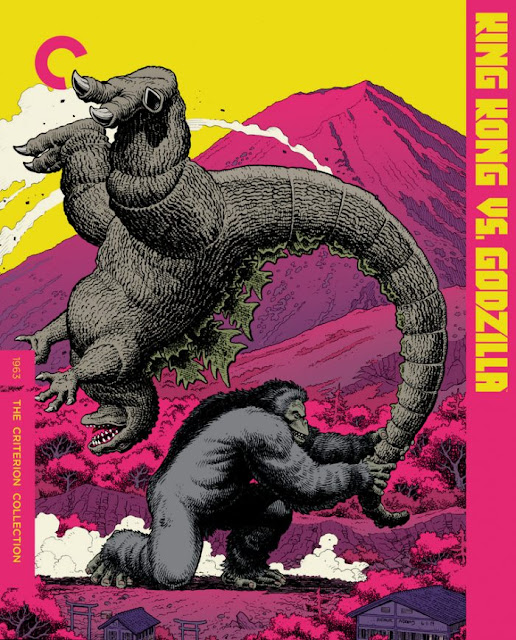 When Toho decided to revive Godzilla after his two 1950's outings it was because they'd gotten their hands on the granddaddy of all giant monsters -- King Kong. The tale of how King Kong came to be a Japanese monster is a circuitous one and a story which will make a fan of Willis O'Brien, the man who made Kong movie in the landmark movie so many decades ago, weep. O'Brien is celebrated now, but rarely given his due and even more sadly for fans of fantasy films the resources to make the movies he imagined. King Kong Vs. Frankenstein was one such project and by taking it to RKO (or what was left of RKO) he eventually lost control of the idea and it went overseas and the next thing you know Toho is mixing the Eighth Wonder of the World with the King of the Monsters. Mary Shelley's creation fell by the wayside but Toho made a version of that even some years later. King Kong as seen in this first Kaiju comedy is a far cry from the classic behemoth who threatened NYC so long before. 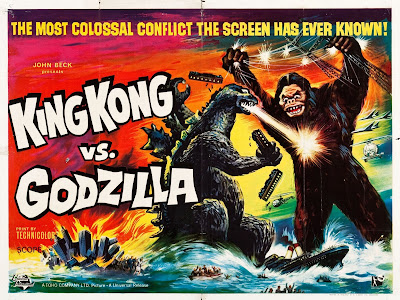 But my focus here is Godzilla. who in this movie plays the villain. Despite being the hometown boy, Godzilla was still seen as the baddie and Kong as the hero who sails in to save the day on the slopes of Mount Fuji. But even though Godzilla is the baddie here, he's for the first time really portrayed with significant human characteristics. Buoyed by the success Mothra, Toho and Ishiro Honda skewed the Kaiju world to include comedy and satire. The monsters therefore were not merely representations of nuclear threats or prehistoric menace, but also characters on a stage and possessed of personality. We see Godzilla wave his arms together, applauding his fighting moves as he struggles against Kong. He is not a force, he is not an animal, he is a something else -- a blend of all of that. And the formula would prove a potent and to an important extent a successful one.
Rip Off
Posted by Rip Jagger at 1:00 AM