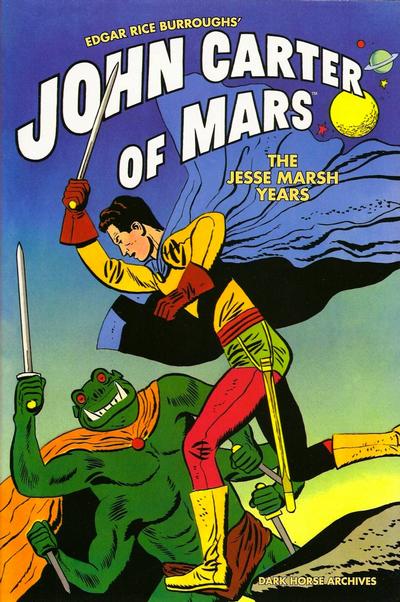 A decade ago, when the movie John Carter was just hitting the theaters the comic audience was treated to several wonderful collections of comic adaptations of the character. The first of these came from Dell Comics in their sprawling and varied Four Color comics line, and featured the artistry of Jesse Marsh, an artist long associated with the Tarzan comic book. Like any adaptation there are changes necessitated by the nature and length of a typical comic book. Writer Paul S. Newman adapted the first three novels featuring John Carter which tell the primary story of how Carter came to Mars known by its inhabitants as "Barsoom", not once but at least twice, and how he became a respected warrior among a four-armed tribe of green giants called the Tharks. He later met and wooed the Princess Dejah Thoris of the Martian city of Helium and battled many monstrous creatures and wicked men and women to keep her and all of Mars safe. As I discus each installment I'll mention how the comics diverge from the novels, which I've been fortunate enough to recently finish reading again after too many years. 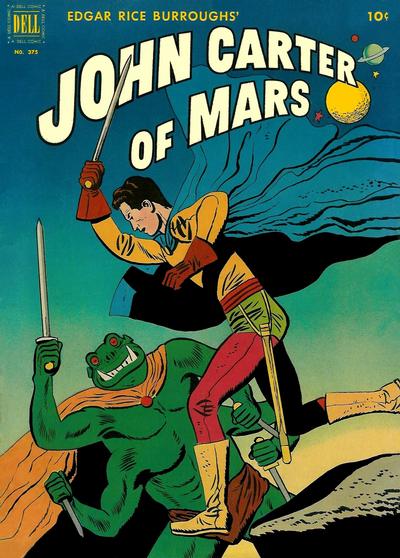 To begin in ERB's novel Princess of Mars John Carter is a Civil War soldier who is seeking a path and gold out West when he is attacked by Indians and forced to hide in a cave which turns out to be a path of sorts to Mars by way of astral projection. The story from 1952's Four Color #375 updates that and makes Carter a soldier fighting what I believe to be the Korean War though the comic is canny to keep this vague. The plot of him finding success and allies among the Tharks especially the brave Tars Tarkus is kept much the same though pared down and when he finally meets Dejah Thoris much of the folderol in the novel is ejected to keep the momentum. Carter and his Princess of Mars escape the Tharks and eventually find their way to Zodanga, a rival city of Helium. The pair had gotten separated and while seeking his love once again Carter encounters the vast air factory which keeps Mars (never called Barsoom in the story) livable. He learns its secrets but for what purpose is unclear since unlike the novel he never needs to use the information save to save himself. He rescues his damsel and the story ends as they arrive above Helium. 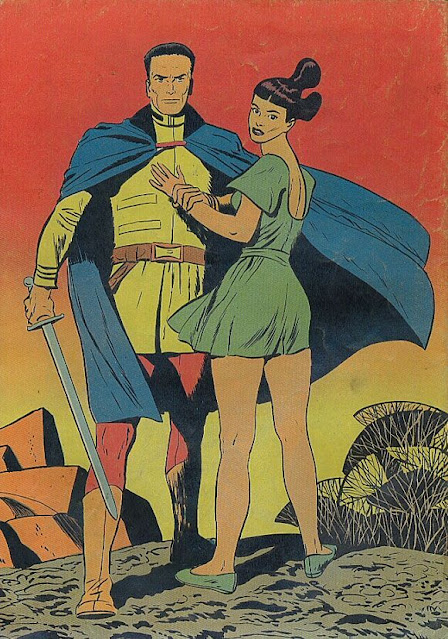 Several things are changed but most distressing was the updating of the Martian ships which become defacto jets. Sadly the great white apes of Mars are present but somehow are lacking those extra arms that make them so weird and strangely menacing. 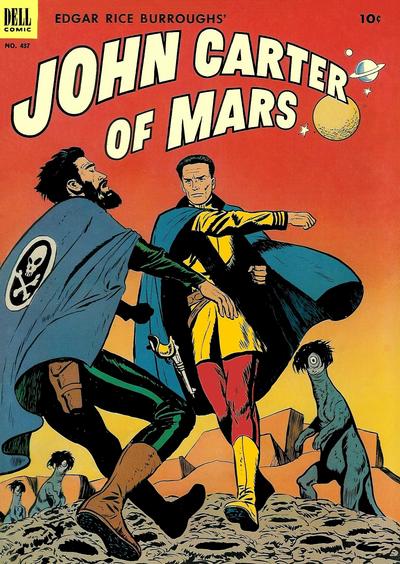 Like the novels the second story from 1952's Four Color #437 adapted from Gods of Mars begins after Carter has been away from Mars for ten years. His time on Mars living with Dejah for a decade is glossed over and no explanation is given as to why he left nor how he returned. He arrives in the Valley of Dor the "Heaven" of the Martians. But he finds his ally Tars Tarkus there and also that this heaven is a hell run by the Therns, another race of Martians who prey on those who travel down the River Is in what most believe to be a journey to the afterlife. It's actually a journey to grisly death or brutal slavery or both. Carter and Tars battle for their lives and save a woman named Thuvia who shows the way to escape. But then they are attacked by Black Pirates of Omean who are themselves followers of the supposed goddess Issus,who turns out to be merely a cruel and decrepti woman of advanced age. They have kidnapped Dejah Thoris and Carter is intent on getting her free. He battles the Black Pirates and wins the day. 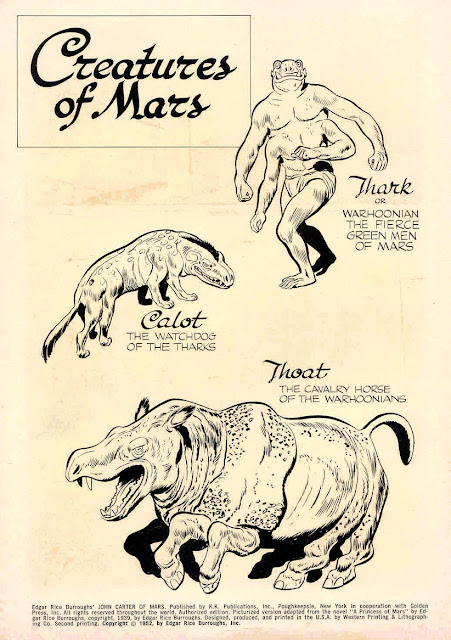 Much is cut away from this second novel. The white apes are part of the deadly tableau that greets devout Martians. Much of the dilemma which sorts out the end of the novel are removed from this story to give it a sense of completion. The Black Pirates in the novel are yet another race and are ebony skinned peoples. This was deemed a problem I guess, and they are white like the Therns and Carter himself. But far and away the biggest change is the absence of Cathoris, John Carters son who fights alongside his long-lost Dad for much of the novel. He's just not here and never referred to. 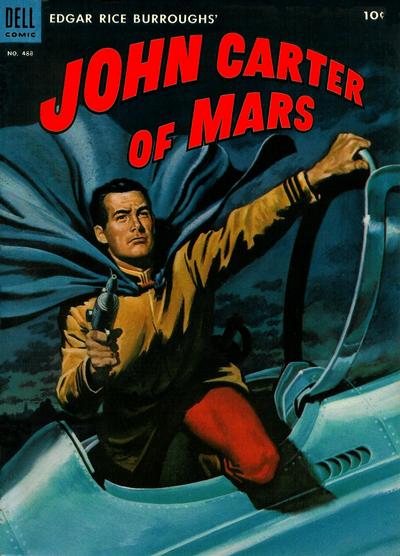 The third and final issue of John Carter of Mars was published a year later in Four Color #488 and picks up the story of The Warlord of Mars the third novel by ERB. It has been simplified quite a bit since much of the first part of the story picked up almost immediately from Gods of Mars. Carter and Dejah Thoris find themselves battling Thurid a member of the Black Pirates and Phaidor the princess of same. They try to kill Carter, Dejah and Tars Tarkus as they are leaving for Helium and in the ensuing crash Dejah and Thuvia of Ptarth are kidnapped. Being saved by Woola Carter and Tars go to the hideout of Matar Shang and they are able to save Thuvia. Thurid escapes with Dejah once again and heads to the distant realm of the Golden Men called Okar. Thuvia, Tars and Carter follow and pass through the Carrion Caves and must confront the Pit of Plenty before they are able to rescue Dejah Thoris once and for all. Carter must also defeat Solon the keeper of the deadly magnetic machine that serves to wreck flying ships who enter the remote land of ice and snow. 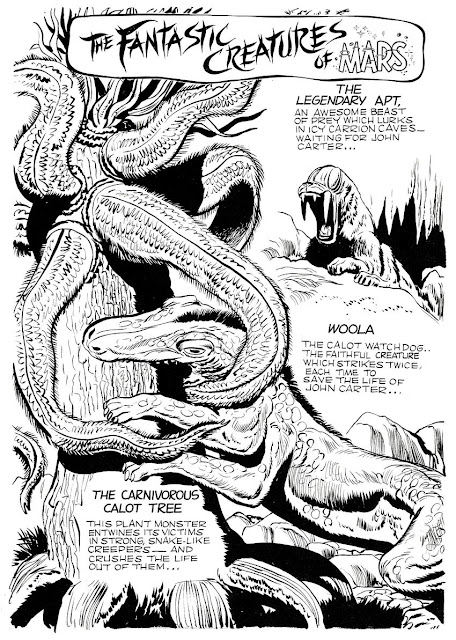 This story has the most changes of any but some are actual improvements on the meandering plot of ERB's original novel. I also like that Thuvia was not a captive as in the novel but a helper for John Carter as he made his way to the north to save Dejah. It made better use of her as a character which was largely redundant in the novel. We get to see the deadly Apts, true monsters who roam the Carrion Caves. The comics update the clothes, as in giving the characters clothes to wear. Often the characters in the Mars novels are nearly naked and that of course would've been a problem for Dell Comics. 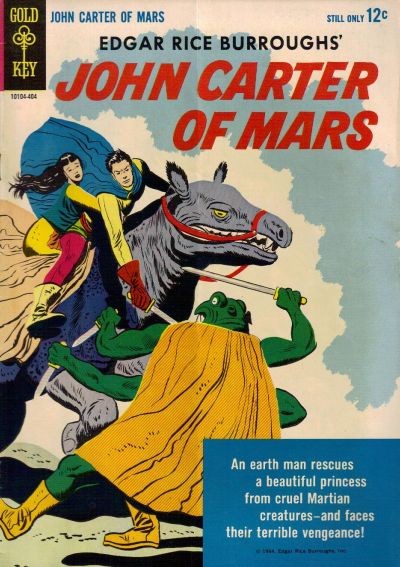 In 1964 Gold Key which had inherited the ERB properties when Western Publishing broke from Dell, reprinted the three stellar John Carter of Mars books. And you can read them online. Here is a link to the first issue. 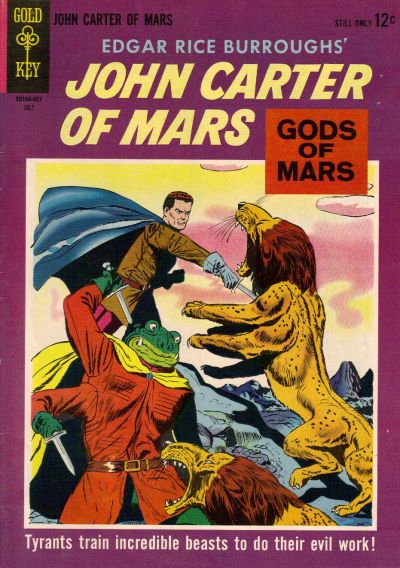 Gold Key though screws up in that they published the third story in the second issue. To read that installment go to this link. 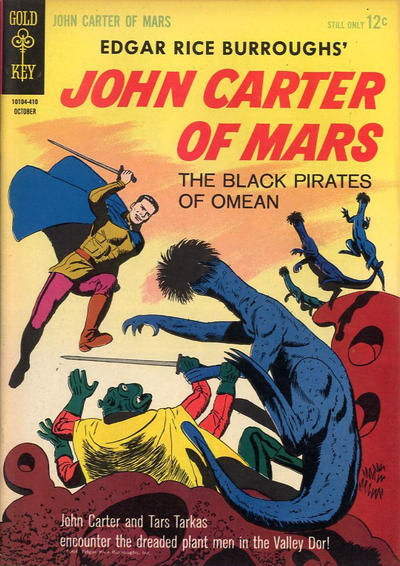 And finally, the second story is reprinted in the third issue. To read this one (and you should do it before you read the second) go to this link.
The three issues of John Carter of Mars are tasty attempts to get ERB's first hero into comics format. Unlike Tarzan of the Apes, John Carter has had a limited profile in comics. His next port of call in the four-color format would take him to DC, the house that Superman built. More on that next week.
Rip Off
Posted by Rip Jagger at 12:00 AM