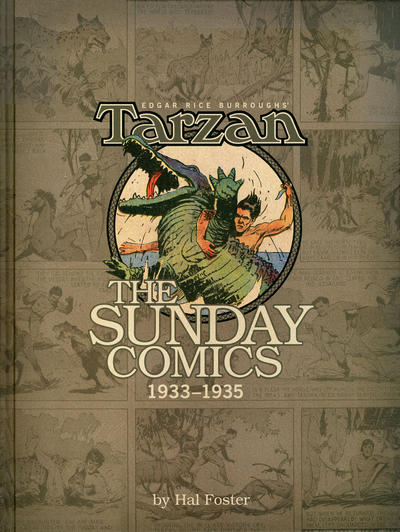 When I read Brian D. Kane's essay which fronts Dark Horse's volume of Tarzan The Sunday Comics 1933-1935 by Hal Foster (the second of three) and discovered just how little Foster was getting paid for his efforts it's no surprise he would dump the "big palooka" as Foster called him for greener pastures in the Arthurian Age at King Features. He was getting just fifteen bucks a week for the Sunday page and while that's more impressive in the 1930's Great Depression era it still seems a paltry amount. It turns out he was the least paid of the operation with the writer and the others such as ERB himself reaping greater profits. But that said, the work Foster did on the Ape Man was definitive. 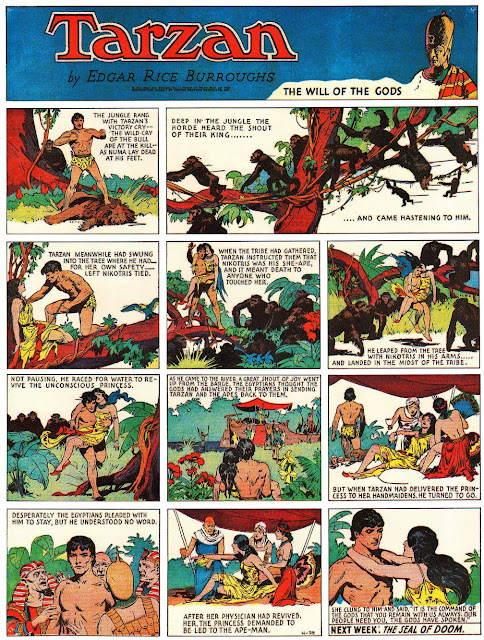 In this volume we continue "The Egyptian Saga" and pick up Tarzan's adventures in a lost land which is occupied by a remnant of ancient Egypt. He'd been tussling with this gang for some weeks and would continue. The Queen Nikotris was a fickle chick who sometimes cried out for Tarzan to save her from some grisly raider and then at other times condemned him to death for insulting her dignity. Tarzan really hung out with this crowd longer than was logical, but his noble sense of justice and his pride indicate he stay and save not only the Queen but several of her subjects such as a young boy who is condemned to death by the religious zealots of the land. Back and forth he fights with the Egyptians and with some barbaric types until finally after months he finally is able to scale a mountain and get out of the valley.

But given that it's Tarzan he quickly finds trouble when yet another princess named Mihrama from the modern world needs his help and he's battling pirates to save her in "Tarzana and the Mysterious Maiden". He also ends up contending with a whole menagerie of wild beasts and among is an ape named Boghdu who becomes in the long run a sturdy ally for the Ape Man. The action never ceases in this strip as Tarzan seems always on the move, often on the run to help this person or battle that creature to the death. The end up on an island which is lorded over by a cruel and greedy white man pretending to be a god named "Dester Molu". He proves a deadly nemesis for Tarzan. 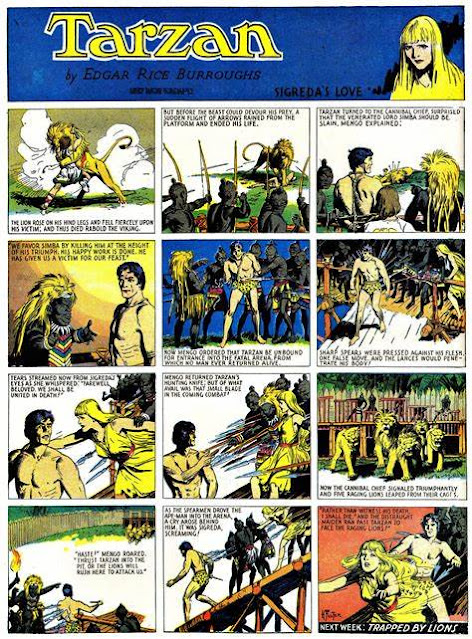 Finally, after getting off the island Tarzan ends up helping haughty young woman who crash lands in the jungle who does get a bit smitten with him and becomes a shade jealous. She's a brave and stout lass but has a tinge of cruelty to her as they end up encountering yet another lost society, this one comprised of Vikings. You can almost feel Foster warming up for his eventual transition to Camelot as we meet a brave Viking who has a young blonde woman named Sigreda who loves him to distraction. This volume ends in the middle of this saga of "Tarzan and the Lost Vikings", so more next week.

These adventures continue to read quickly and it's impossible to read them without immediately wanting to jump to next one. It must have been exquisite torture for Tarzan fans of the 30's to wait for weekly installments. This Ape Man is the ruggedly handsome ideal and as these strips develop, we see him becoming more and more the modern image of the hero we know. The strip was just part of the grand push which saw Tarzan not only continue to arrive in new novels, but movies were popping up all over as well. A great time to be a fan of Tarzan indeed.
Rip Off
Posted by Rip Jagger at 12:00 AM
Labels: Edgar Rice Burroughs, Hal Foster, Tarzan of the Apes, The Sunday Funnies