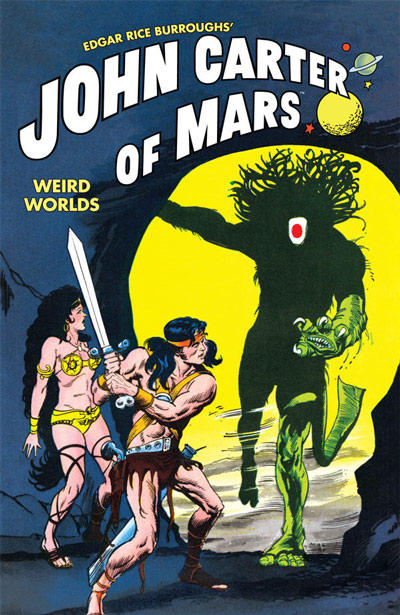 The first time I encountered John Carter of Mars was in the pages of DC's comic adaptation by Marv Wolfman and Murphy Anderson. This series was initiated as a backup for the Tarzan of the Apes comic spearheaded by Joe Kubert. DC was in its 25-cent period and needed some additional pages to justify the greater cost. I've always been a fan of this period of DC despite the fact it cost them market share because the value for money was superior for the time. And that was absolutely the case in the first three issues of Tarzan. 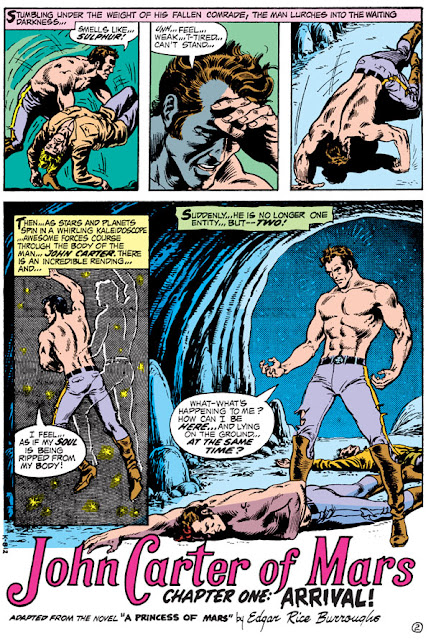 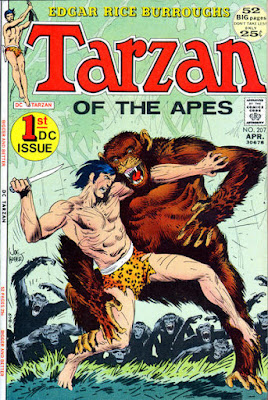 Joe Kubert's lead story was tremendous as he adapted the Tarzan once again to the comic page with power and energy unlike any before. And nestled in behind was the sleek and smooth art of Anderson as he portrayed Barsoom. (One entertaining detail is that DC in its wonderful way always included a note reminding the reader "Barsoom" was a name for Mars. Shades of a yellow impurities.) Wolfman and Anderson begin by adapting the novel Princess of Mars and if the 25-cent size had remained I can only speculate what quality we might have seen for some years to come. 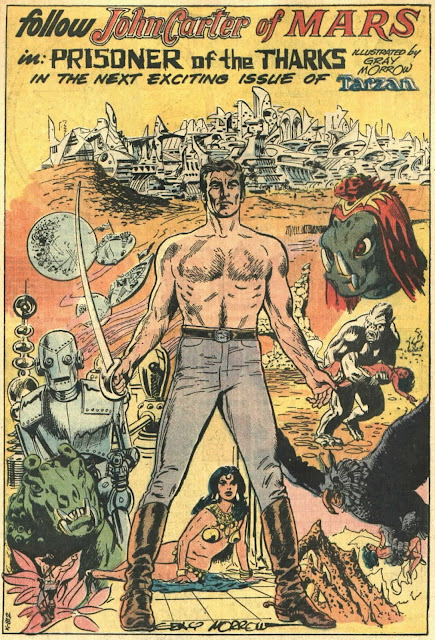 Gray Morrow handled the art chores for the second issue and if anything, I prefer his somewhat grittier rendition of Mars. Anderson's reputation as a science fiction artist was well established but he had a slickness that was pretty but sometimes lacking in energy. Morrow was the best of both. But he only lasted for one issue and then Anderson was back. 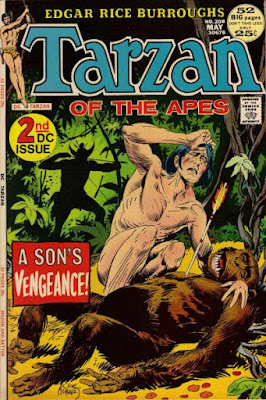 John Carter stayed in the back of the Tarzan of the Apes book for one more issue before DC decided it had to cut its page counts. The hope of a one-two punch monthly from ERB's two earliest creations was not to be. 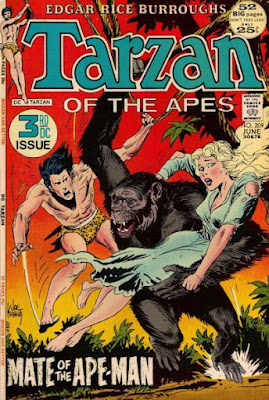 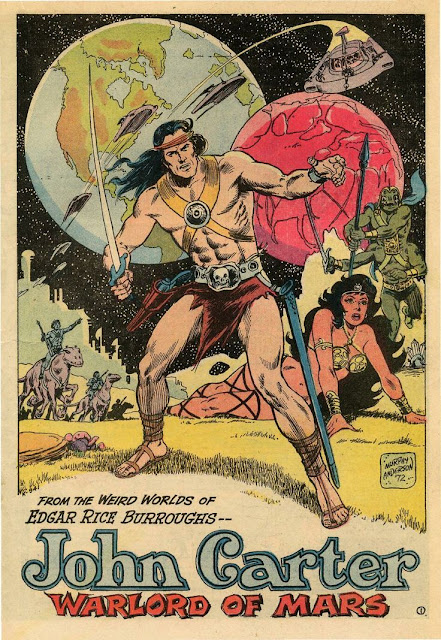 But all was not lost. John Carter was shifted into a brand-new book titled Weird Worlds. John Carter shared the space with the adventures of David Innes who had drilled down to Pellucidar in the first DC issues of Korak. Finally the series was getting some cover attention. It had been a secret in the back of those first three Tarzan comics. 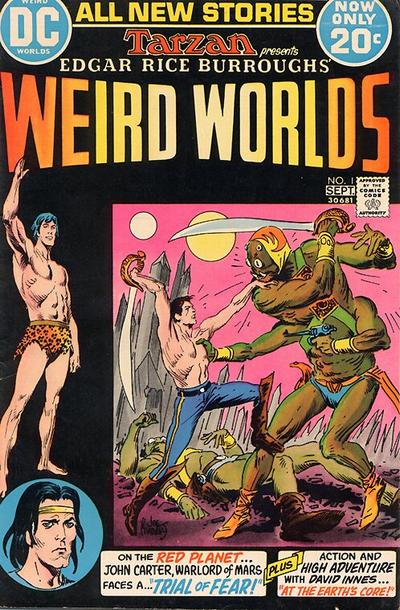 The adaptation of Princess of Mars continues in this new comic. It's nice to finally see a Joe Kubert cover for John Carter as he battles a Thark. 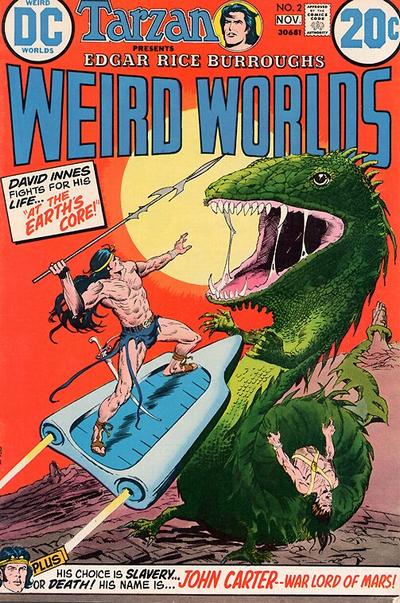 With Anderson still on the art, the adaptation continues but the ending is different as Carter stays on Barsoom and ends up in the Valley of Dor at the end. This sets up the next adaptation of Gods of Mars. With some significant changes and necessary deletions, the Gods of Mars rumbles along introducing the readers to Thuvia who is called in Anderson's final page for the series as the "Huntress form Hell". According to the GCD Joe Orlando supplied this John Carter featuring a Plant Man. 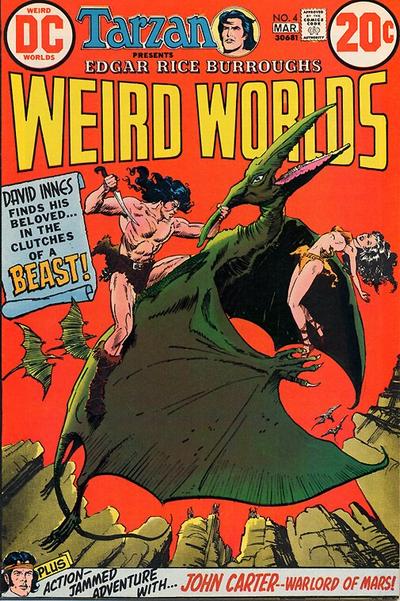 Marv Wolfman is still aboard but new artist Sal Amendola steps in to fill the shoes of Murphy Anderson. It's a no-win for poor Sal but while his storytelling is not as refined and his finishes are not as sleek, Amendola does bring some additional energy to the pages which ripple with movement. 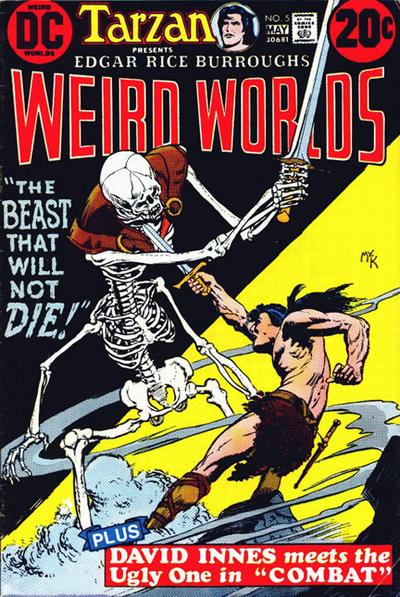 One thing I noticed is when Wolfman veered off the plot of the given novel he'd change the credits from a specific book to merely "the famous Martian series". He adds in a character from The Synthetic Men of Mars to the story here named Ghron of Ghasta who turns out to be an illusion cast by the main villainess Malada the White Queen of Barsoom. That's a very nice Mike Kaluta cover by the way. 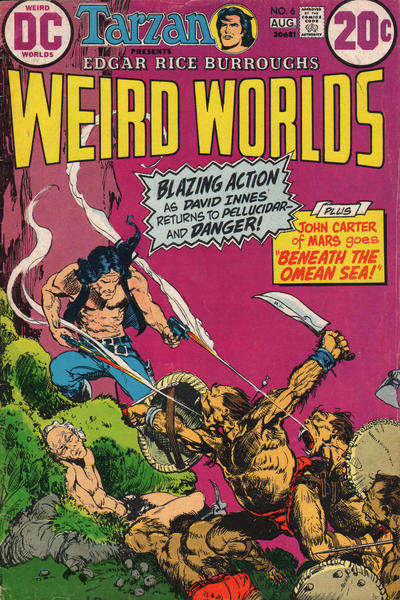 In the next issue Carter is waylaid in the land of the Black Pirates where he meets the fetching Phaidor and eventually the evil god-queen Issus. 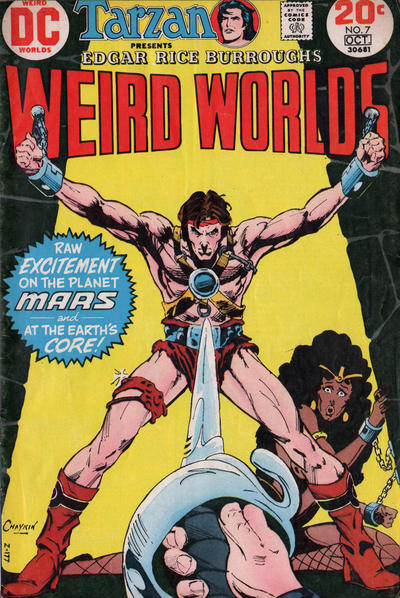 Beneath a Howie Chaykin cover the final mainstream installment of John Carter wraps. Strangely Carter is naked for most of this story for unexplained reasons. He eventually dons the uniform of a defeated enemy and I suppose this is a costume change of sorts. Anyway, it's a finale for Marv Wolfman and Sal Amendola wrap up the story promptly. Wolfman indicated in his forward to the Dark Horse collection that the team was informed a few times that the book was about to be cancelled so that played havoc with the plans for the series. But while that's all for DC's Mars stuff in the Dark Horse collection titled John Carter of Mars -Weird Worlds there was some more Carter at DC. 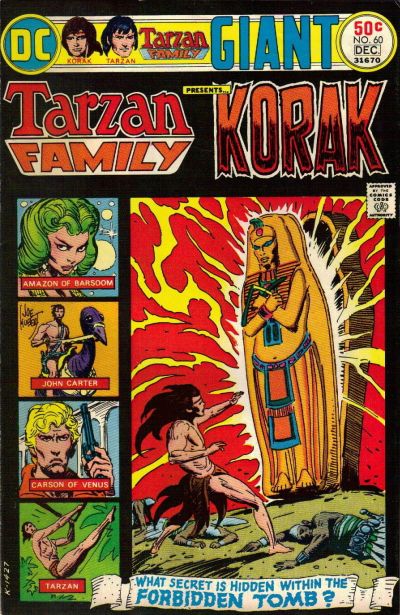 Robert Kanigher took over the writing and Noly  Zamora became the artist on a series of tales from John Carter's secret diaries. This allowed the team to not be fastened down to the novels. These stories took place in the pages of Tarzan Family which kept the numbering from Korak and was a last-ditch attempt by DC to use the characters before they switched over to Marvel for a time. It's too bad Dark Horse didn't include these stories as wonky as they were. 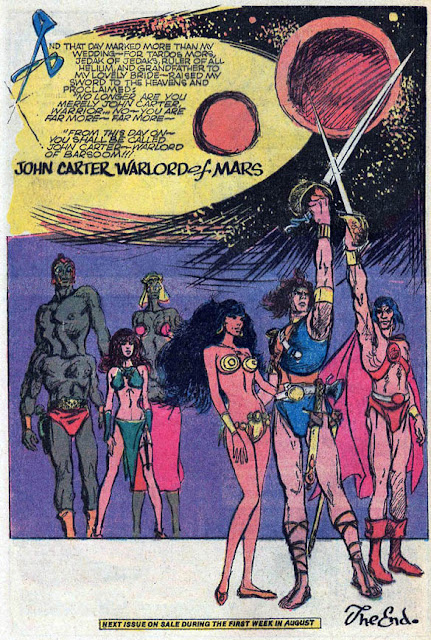 Overall, the John Carter series was a noble but failed attempt to get the character onto the four-color page. If the scheme originally outlined had been followed it would've been dandy, but DC was in a constant ruckus during these early years of the Bronze Age, and it seemed like they were changing up things constantly. But Marv Wolfman was not done with John Carter of Mars. More on that and the later Bronze Age Marvel version next week.
Rip Off
Posted by Rip Jagger at 12:00 AM
Labels: DC Comics, Edgar Rice Burroughs, Gray Morrow, Howard Chaykin, Joe Kubert, John Carter, Marv Wolfman, Mike Kaluta, Murphy Anderson, Sal Amendola