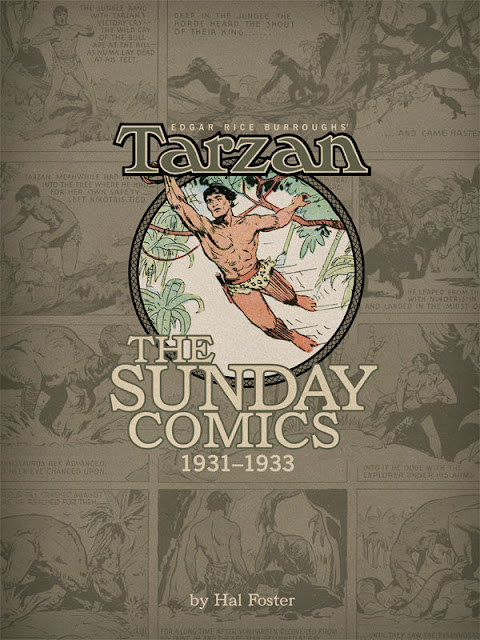 Hal Foster had been the first artist tapped to bring the adventures of Tarzan of the Apes to the daily newspaper. He adapted the first novel in a style not unlike that used in Big Little Books. After the first novel he departed the series and was replaced with the sturdy Rex Maxon. When the success of the strip provoked a Sunday page it was Maxon who began it. But within just a few months Hal Foster returned to the jungles of Tarzan and began his amazing journey which revolutionized adventure comic strips for all time. 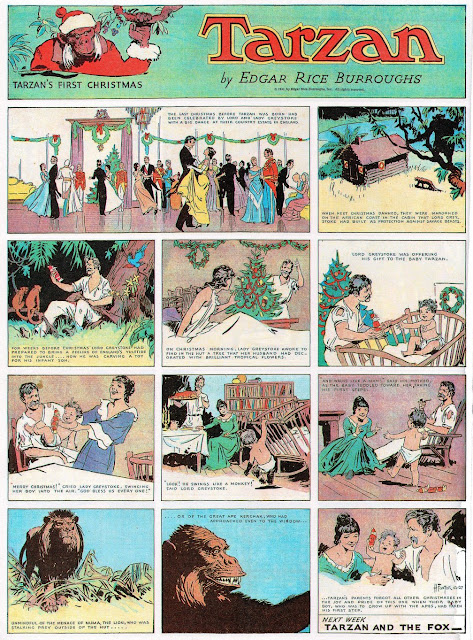 The big difference is that Foster was an illustrator, an artist who focused on advertising. When he came to do comics, he didn't relinquish his realism which had been the normal approach. He kept his worlds lush and remarkably familiar and real. Mark Evanier in the essay which fronts the first volume of Dark Horse's Tarzan The Sunday Comics he suggests that Edgar Rice Burroughs found in Foster's drawings the closest approximations to what he visualized in his head when he wrote them. Somehow Foster was able to make Tarzan and his allies and foes come alive not only for the broader audience of the comic strips but for Tarzan's creator as well. Also, it's important to note that these Sunday pages were, aside from magazine covers and book jackets, the first color Tarzan many readers were getting access. The Sunday pages of the 30's not at all unlike the advent of color on television in the 60's quickened the imagination in my opinion. 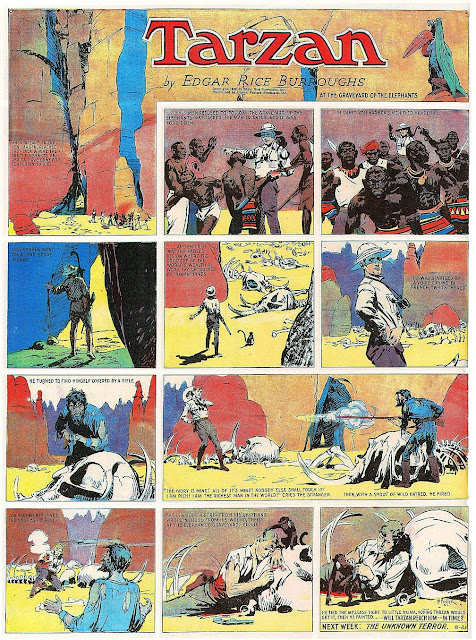 Foster picked up the strip in the middle of a tale "Hawks of the Desert" which follows the Ape Man as he helps a friend who is connected to the French Foreign Legion. The Tarzan of this stretch reminded me much of good old Elmo Lincoln from the movie serial The Adventures of Tarzan. He looked a lot like like Frank Merrill who portrayed the Ape Man in Tarzan the Mighty and Tarzan the Tiger. After this adventure is wrapped up, with Foster doing little distinguish his art from that of Maxon's that had preceded it, we get several one-page stories about such things as Tarzan's first Christmas and some of his adventures in both English society and the jungle he so loves. 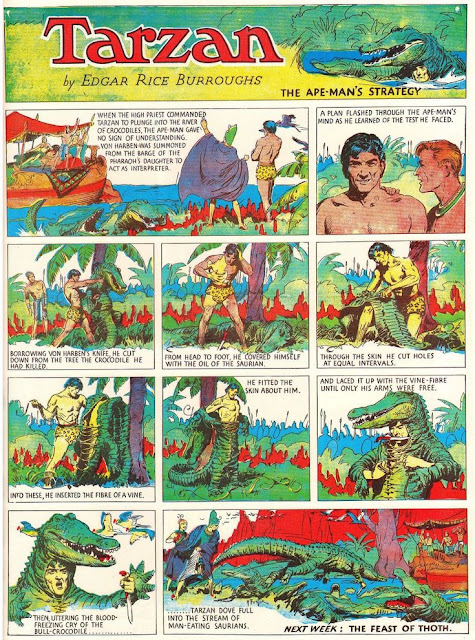 The first extended storyline Foster tackles on his own features about two strong women who end up as white goddesses for a local tribe. One is a tough as nails chick named Hulvia who was raised aboard a ship by her seafaring Dad, and who ended up stranded but took it in stride and took control. She falls in love and ironically is replaced by a brave woman named Lenida who tames lions but wears a black mask after she was mauled. Both of these women are fully capable though Hulvia does become a bit of a damsel-in-distress when she falls in love. From these adventures we get a quick visit from Tarzan's son Korak the Killer and then Tarzan treks off to rescue a friend who has gotten lost and injured in the Elephant's Graveyard. Wildy the graveyard leads to a valley filled with dinosaurs and Foster is getting more and more relaxed and using a greater variety of panel dimensions to tell the story. 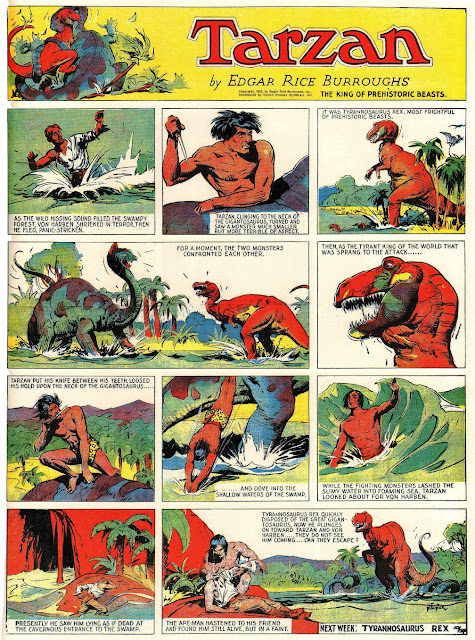 Tarzan too loses his Frank Merril shoulder strap and uses the simple loin cloth we've come to expect. Tarzan and his friend are then drawn into a wild series of adventures with a lost culture derived from ancient Egypt. Tarzan is thrown to the wild beasts as sacrifice but wows the crowd when he shows he can control them. Thus begins a back-and-forth struggle as the Egyptian society tries to cope with these challenges to their religion and a lack of food. He also must contend with the fickle passions of a princess who is not afraid to seek blood when she feels slighted. This first volume ends with Tarzan still contending with the Egyptians as he will do for much of the next volume. But that's next time.
Rip Off
Posted by Rip Jagger at 12:00 AM
Labels: Edgar Rice Burroughs, Hal Foster, Tarzan of the Apes, The Sunday Funnies