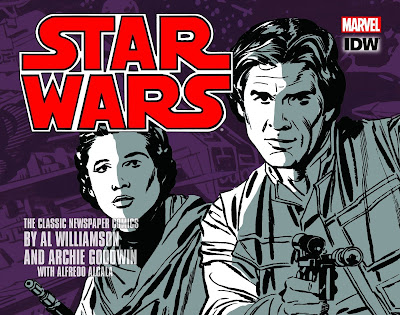 It's almost unimaginable to me that the work of Russ Manning, an artist who I regard as among the most amazing in comics could be topped on a project. On Tarzan when Joe Kubert came along he made the character his own and his version didn't seem to compete with Manning's more modernized sleeker Ape Man. But on Star Wars one has only to glance at the work Al Williamson using the characters and settings of the George Lucas classic movie and you know instantly that it's the ideal pairing of an artist and a project.

Apparently Archie Goodwin and Al Williamson tried out for the strip in the very beginning and seeing the samples reproduced in this collection it's hard to imagine how they were immediately hogtied and forced to take it on. But it didn't happen and Russ Manning ain't no one to sneeze at. But Williamson's adulation of Alex Raymond and the way he took that and other influences to make his own idealized artwork made him the perfect match for the Lucas film, because he and Lucas were coming from the same source though by two different tributaries. Williamson used the original Flash Gordon comic as inspiration for much of his work and Lucas tapped into the zeitgeist of the serials that used Flash as its subject matter. Two craftsmen who looked to the past to make the future.

And Archie Goodwin ain't no slouch. The respect he garnered universally across the comic book field in his capacities as writer and editor is nigh near unique. No one seems not to have liked Archie Goodwin, and having been in jobs where he was forced to tell folks things they didn't like to hear that's incredible to imagines and points to a sincerity and competence that was evident to his peers instantly. I will worship him until I pass for his creation of Manhunter with Walt Simonson, and I fell in love with him in the first story I read by him in the pages of Iron Man. The skill was just evident, even to my boy's eyes and he has always been a talent I followed from that time forward in comics. I never really knew of his simultaneous career in comic strips all that much, to my regret.

But this collection begins with an adaptation of a novel by Brian Daley titled Han Solo at Star's End. It's scripted by Goodwin but drawn by Alfredo Alcala. Now let me be clear here, the work of Alacala is astounding and his pages and pages of barbarians and damsels and such are wonders in details and construction. He's a master, but his work on Star Wars is right terrible. He doesn 't get the costuming right, his version of robots is all wrong, and really it's quite disappointing.

It was always a delicate matter about these films and the secrecy that surrounded plot points. So it's no surprise that even after the arrival of The Empire Strikes Back that Goodwin and Williamson told tales set between the two tent pole movies. It's safer all around and adds to the luster of the Star Wars universe. In the modern day internet mini-episodes and comic books act as preludes and enriching events in conjunction with a show in real time, such they did with The Walking Dead and Star Trek in recent years. But in the early 80's such organized storytelling was not common at all, but then licenses were just becoming a booming business, the whole far more lucrative than the sum of the parts.