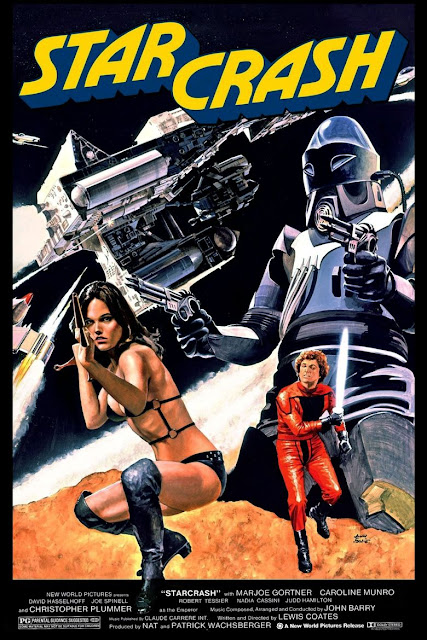 Like many a young man in those long ago days of the 70's I developed a strong infatuation for the ravishing actress Caroline Munro. The raven-tressed lovely showed up in more than a few creature features from the folks at Hammer as the era of their dominance was closing out. She was in the last Dracula movie in which Christopher Lee portrayed the benighted Count and she was both damsel in distress and helper to Captain Kronos as he battled vampires in those mythical olden days in England. She popped up in Harryhausen's Golden Voyage of Sinbad and perhaps most famously for those not already in the Munro fan club tried to shoot up Roger Moore from a helicopter in The Spy Who Love Me. Invariably her charm shined through the screen as she flashed her tempting smile and somehow made her eyes twinkle. (How does she do that?) 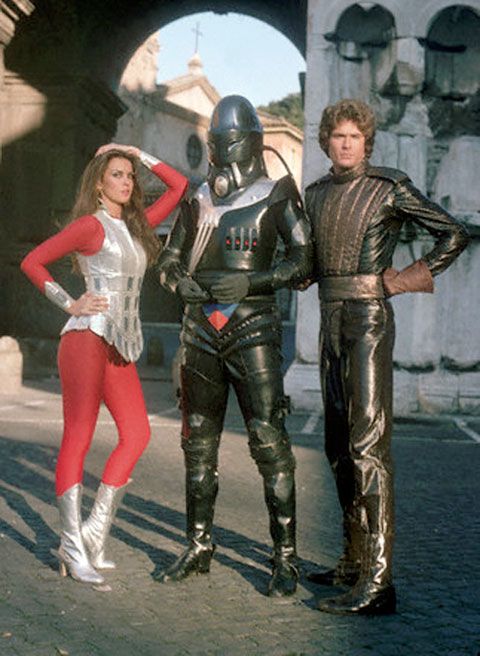 So when she gets a starring gig as space outlaw "Stella Starr" in a low-budget Italian Star Wars knock off it's not an event to be ignored by her fans. StarCrash is an amazing and often silly mashup of a movie with sparkling effects and both delightful and clumsy scenes, as well as offering up to the whole wide world the one and the  only "The Hoff". Marjoe Gortner (not to be dismissed) gets the top billing in the movie, but we all know this is Munro's movie and add in an up and coming and devastatingly handsome (downright pretty really) David Hasselhoff and you might have a flick for the ages, or at least for the pretty people. The small role by Christopher Plummer is merely a garnish on an already heady feast. Joe Spinnell is aboard the train as the mustache-twisting villain to boot. 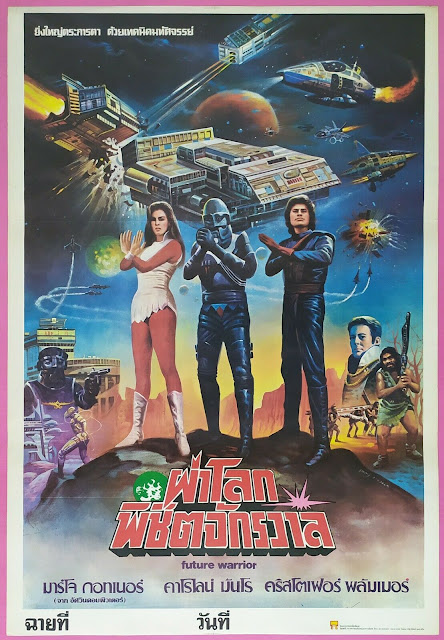 I'm sure I saw Star Crash when it was in theaters, but I equally certain I have not seen it since and so it faded from my memory. If anything I thought it was forgettable. Last year I picked up a DVD from Shout Factory which offered up not only the movie but incredibly copious commentaries from StarCrash "super fan" Stephan Romano. He gives us not just one, but two rich full commentaries on the movie focusing on different aspects of the movie. The DVD I have also has an insightful look into the special effects which were done with astounding creativity by Armando Valcauda with no budget and almost no studio.

Whereas Star Wars was intentionally looking for a lived-in universe, StarCrash is attempting the most colorful one it can muster. It's a goofy movie that enjoys itself and offers many a love note to sci-fi flickers of earlier eras, especially those of Ray Harryhausen. 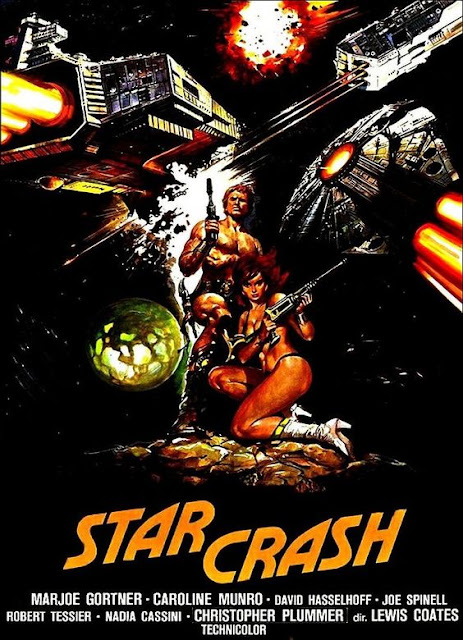 Luigi Cozzi ("Lewis Coates" on the posters) directed a delightful romp of a film that stands the test of time because it makes no attempt to be part of any particular time, it just wants to have a good time. It's weird, it's strange, but it grows on you like a warm fungus.