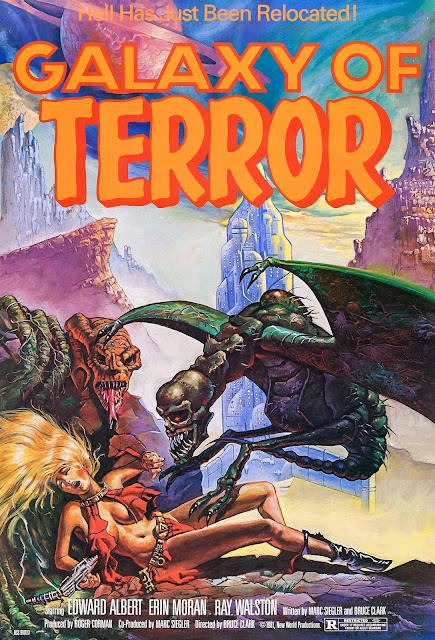 Galaxy of Terror jumped into theaters in 1981, a brazen rip off of Alien by the shlock-meister of exploitation Roger Corman. Based on what I've read Corman's main contribution to this grim and gritty little flicker is a surreal rape sequence on a gorgeous dame by an enormous and squishy alien worm. That encounter is depicted in the poster above, sort of. This is a grim movie, with dark grisly sets recycled from Battle Beyond the Stars. I found few of the characters in this movie likable. They are either too weak and scared, too brazen and cruel, or too stupid and cracked up to trust. Some are better than others and Sid Haig as a mostly silent blade-wielding joker is my favorite. What's that say about the script, that my favorite character says virtually none of it. 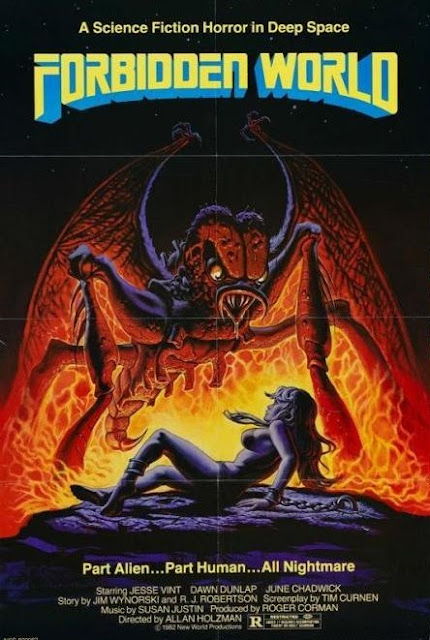 Forbidden World from 1982 is another attempt to rake up some of the leftover money stirred up by giving us a heart-warming tale of a distant outpost at which they concoct deadly mutant monsters (none of which look like the critter in the poster) which immediately escape and set about killing all the staff, including some very attractive babes. This one has some humor to leaven its horror and some really nifty nudity for those who like that sort of thing. The special effects won't light up anyone much, but they serve to move the plot along. This one is better than its predecessor from the Corman farm because of its lighter tone and if only to wait to see some really compelling images of  some very pretty girls with their shirts off. 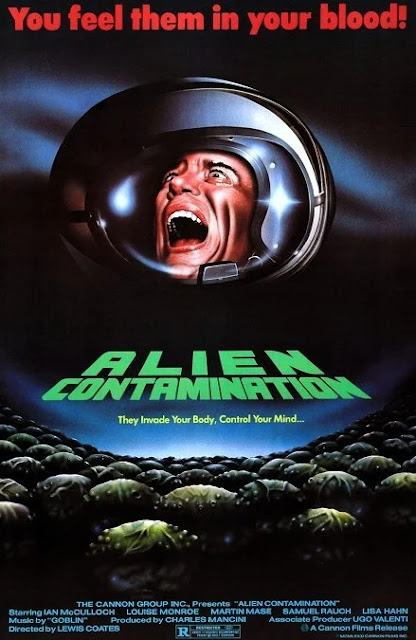 Contamination is a movie by Luigi Cozzi (Lewis Coates), the man who gave us StarCrash and sadly it lacks the charm of that galactic mind-bender. Astronauts are possessed and bring alien seed pods to Earth to raise in hidden farms and then contaminate the world with the deadly results. A former disgruntled astronaut, a NYPD cop and an attractive lady scientist are called upon to get to the bottom of what appears to be a scheme to take over the world. It's not quite Invasion of the Body Snatchers nor Alien but it's a low-budget blending of both in equal parts. It's pretty darn gory though, much much more than StarCrash. Lots of exploding bodies and such when many rounds of bullets are fired. If grisly don't bother you, then Contamination (sometimes called Alien Contamination) is worth a quick look.