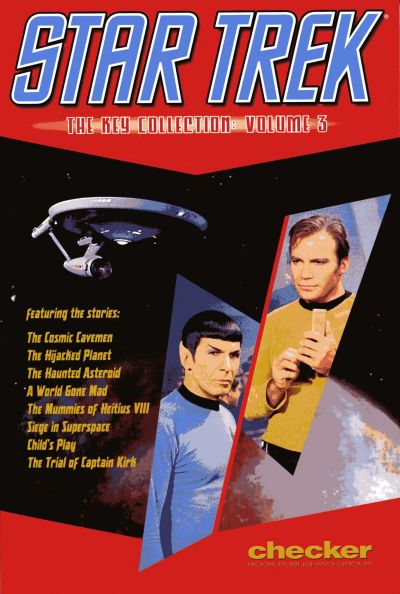 With the third volume in the Checker Star Trek - The Key Collection  run, the characters and the ship and such have largely been made consistent with the now defunct TV show. It will begin its surge to prominence as the reruns will bring it to more and more of its audience, an audience which will grow to love the adventures and will crave more. The Alberto Giolitti studio is still handling the artwork and the likenesses of the characters are remarkably accurate by this point. 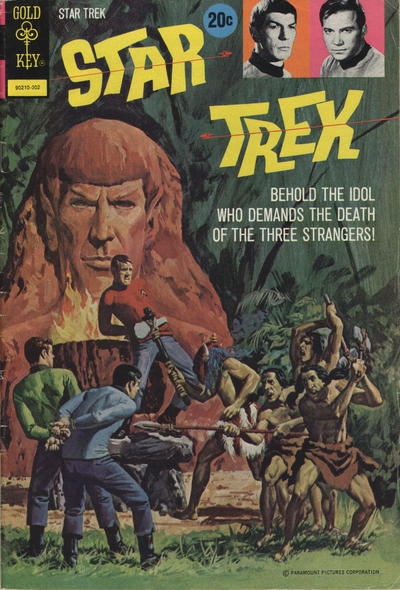 The first issue in this volume gives us the conundrum of how Mr. Spock's face has become an idol for a near prehistoric race. For the first time the Prime Directive is evoked, though I don't think the phrase for the Federation policy of non-interference is actually called that. Taking over from Len Wein, the veteran Arnold Drake wrote this and the next three issues of the series. 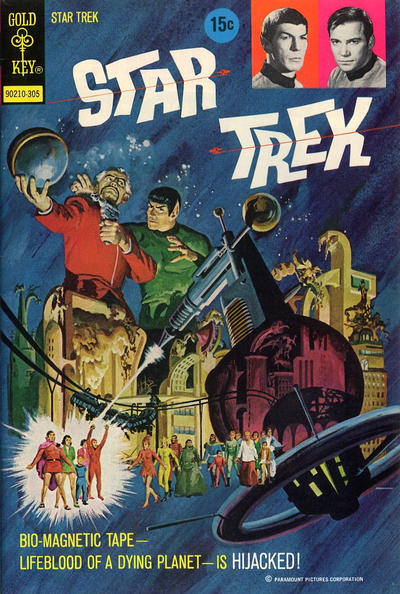 Then we confront a true villain who seeks to ransom an entire planet of living people who have been transformed into electronic versions of themselves and stored for transportation to as safe region of space. And Mr. Spock becomes infatuated. 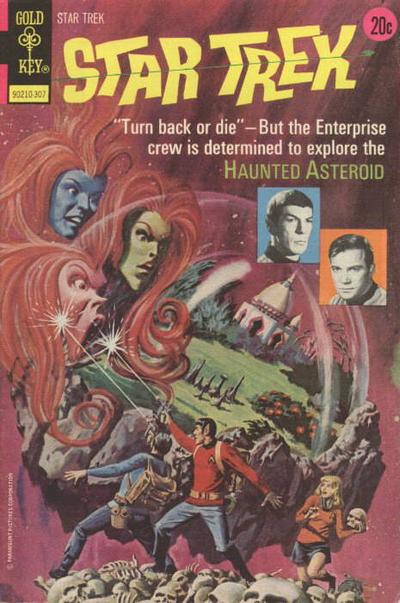 The haunted asteroid in the title of the next story is actually an outer space tomb built for the memory of a long-dead queen many centuries before. That doesn't explain what seem to be ghosts and zombies on its surface though. 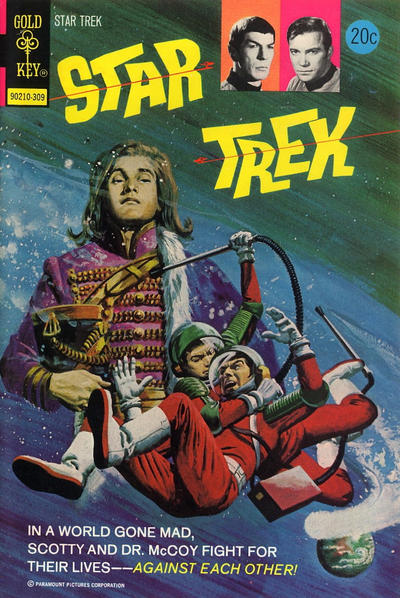 The Enterprise is ordered to transport a haughty young ruler to his planet which itself seems to be falling into the hands of an unscrupulous military leader. This one reminded me mightily of The Prisoner of Zenda. 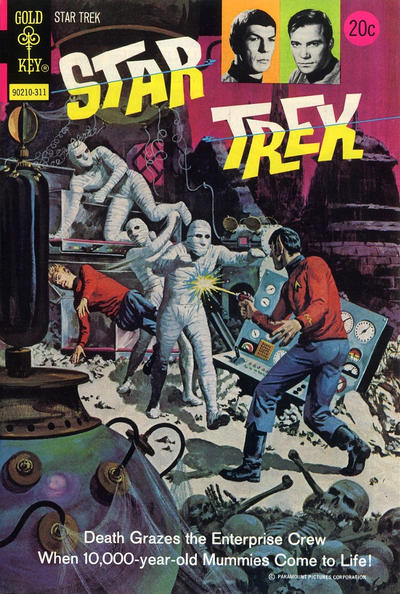 The crew of the Enterprise have to do battle with some pretty implacable mummies. Now of course there's more to these mummies than meets the eye as is often the case in Star Trek stories, the details of horror are borrowed and given a fresh spin. John David Warner wrote this issue. 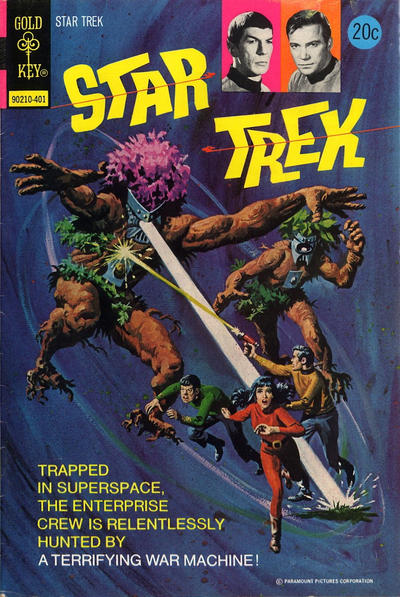 Kirk leads the landing team onto a world which is overcome with intelligent plant creatures, a strange scheme gone amuck. This is a rarity to this point in that Uhura plays a pretty important role. Gerry Boudreau of Warren Magazine fame handled the scripting of this and the next issue. 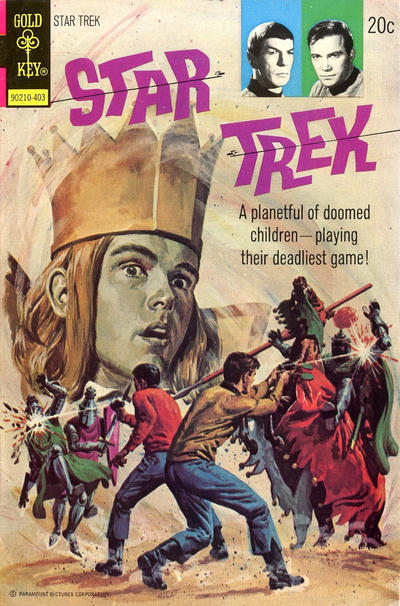 A world of kid's only is the next landing site. The team is drawn into a conflict waged among kids who can never get older than thirteen years of age due to an ancient plague. 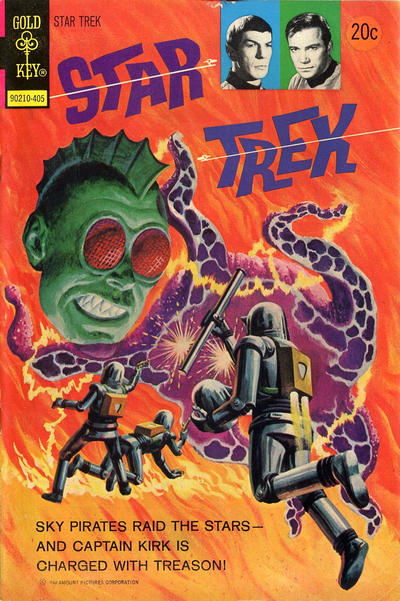 Kirk brought to Federation headquarters and must suffer a court-martial when he is accused of accepting bribes from a faction in dispute on a mining operation. It proves difficult to clear his name and requires some pretty exotic technology. Arnold Drake was back for this last issue in this volume. As always George Wilson handled the covers for all of these comics, his steady reliable artwork a boon to many a Gold Key offering. 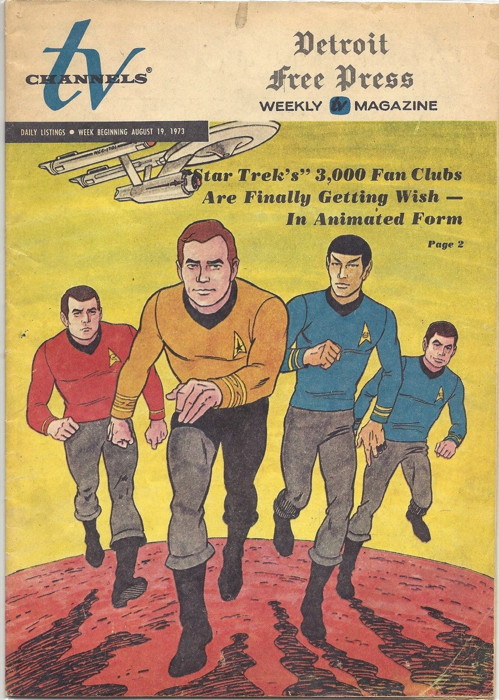 It should also be noted that while there was no direct connection save for the subject matter, the animated Star Trek series from Filmation arrived while some of these issues were on the stands. Clearly the Star Trek phenomenon was beginning to catch momentum.  Next week we'll wrap it up with the final two Key Collections.