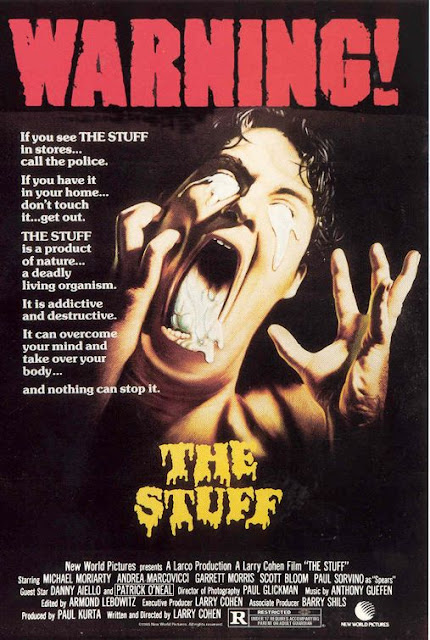 In the late 50's we had the Blob descend from the depths of space, and in the 70's a small part of it found its way back to wreak more havoc. In the 80's Larry Cohen's The Stuff seems to be a movie that wants to hit a number of the same notes as the The Blob, but with perhaps a bit more pointed humor and a little sharper satire. The Blob came from outer space but the Stuff seems to come from the depths of the Earth itself. 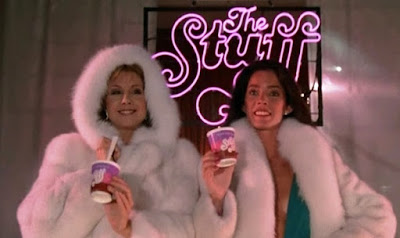 An old man finds a bit of the Stuff in a mine and finds the white goo tastes surprisingly good. We cut forward many months and discover that The Stuff is a popular food product which is taking the nation, if not the world by storm. We are treated to some well-designed ads for The Stuff and then we meet our hero, an industrial spy with a wild wit and perverse attitude. (To put this movie within a very narrow time frame of pop culture awareness, Clara Peller of "Where's the Beef?" fame has an exceedingly appropriate cameo. )He quickly finds that this Stuff is something which has a profound effect on people, even to the point of making them not people anymore. Those who have come under its spell fight mightily to keep it safe and to keep its secret. 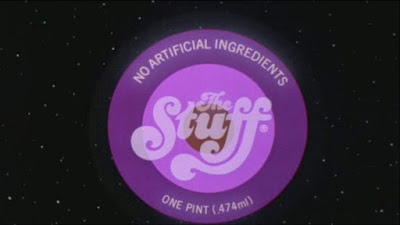 The only problem with this movie is that its got some dissonance in tone, with some characters played too broadly to fit in with the overall scheme of biting satire. But that aside, the movie still lands many punches not the least of which is how modern culture is addictive to pleasure at its core and all too susceptible to the whims of modern marketing.