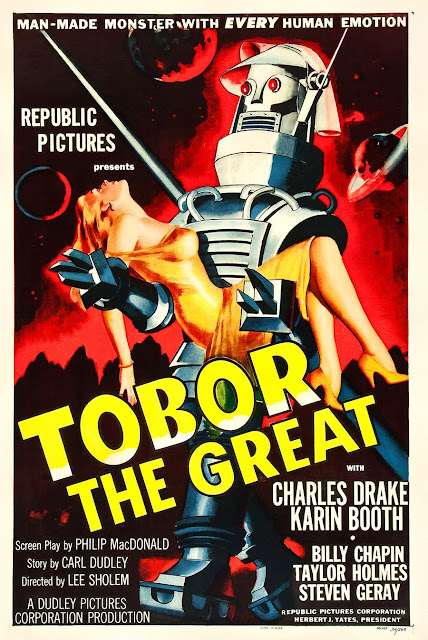 Tobor the Great is yet another of those vintage sci-fi classics I'd never seen until recently when I grabbed a copy off of the Amazon and sat down to enjoy it in all its 50's psychotronic splendor. I was not disappointed and the movie was all that I expected and more too. 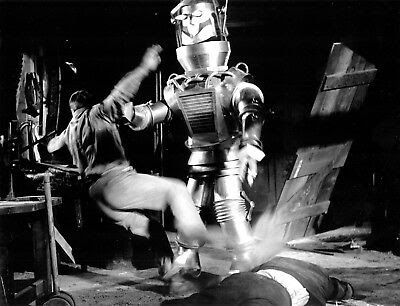 Of course "Tobor" is "Robot" spelled backwards and the movie points that out a few times for the folks who don't tumble to it. (I'm not going to criticize because there are lots of obvious things I didn't get until much later than I probably should have.) We are in the later 50's (some few years beyond the 1954 film's release date) and man is pushing to get into outer space. The debate which opens the movie is whether its ethical to expose people to the rigors of space without foreknowledge of what they will encounter. This debate results in a classic absent-minded professor and a fiery young doctor working together on a machine which can take a person's place. 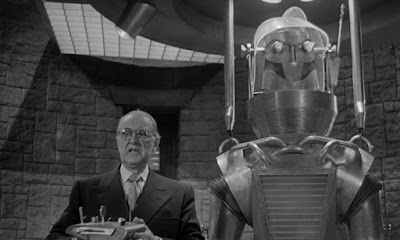 Charles Drake and Karin Booth play the obligatory romantic leads in a movie in which neither of them is the focus and who have names I don't care enough about to look up. We spend more time with the robot, his ancient creator (Taylor Holmes),and the latter's grandson "Gadge", a genius of a kid who has a knack for doing exactly the opposite of what he is told and getting away with it. It is the relationship between Tobor and Gadge which is the core of the story, as the boy seeks a strong male having lost his father in the Korean conflict. Despite lots of screen time devoted to the shenanigans of red spies (Stephen Geray and Peter Brocco among others) working almost in a Three Stooges style to get the secret of Tobor, this is the story of a boy and his 'bot. 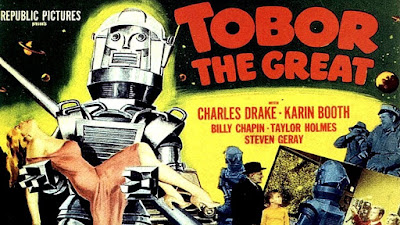 There are lots of familiar movie locations in this little yarn from the friendly sci-fi confines of Griffith Park Observatory to the "Garden of the Gods". This is a perfect example of movie craftsmanship with good work done on nearly all fronts resulting in an entertaining movie. It's not going to elevate beyond that status because frankly it never wants to. But for those wanting a pleasant sci-fi diversion Tobor the Great is ideal.