God Told Me To! 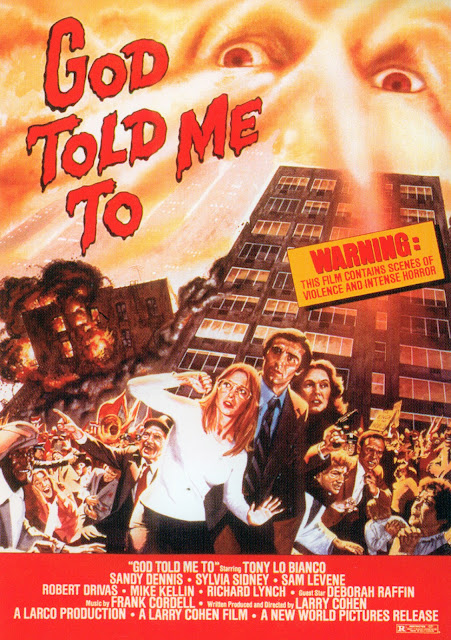 Thanks to a recommendation here at the Dojo when I taking a gander at another Larry Cohen movie, I was made aware of and swiftly got possession of a copy of Cohen's God Told Me To (also released under the title Demon), a 1975 Horror-Science Fiction-Crime drama blend which delivers on all its premises surprisingly effectively. The movie sports a very strong cast with a bevy of familiar faces if not names occupying nearly every scene. Even the late Andy Kaufman the rebel comedian makes a showing as a killer cop. This is one of those movies that takes a few different directions. If you've not seen it, I recommend it, if you have than venture further. 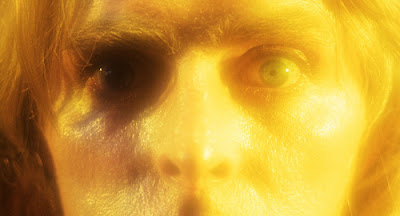 We begin on the streets of New York City when suddenly folks begin to drop dead, the victims of a sniper tucked in high above the crowds on a water tower. He kills many and when queried by our hero cop named "Michael" played by Tony Lo Bianco says simply it was because God has told him to. He then promptly leaps to his death. This is just the beginning of a spate of murders, with each murderer stating unequivocally that God had told them commit their crimes. And as the hero pursues the clues, the story switches from a crime drama to a horror story with implications of the supernatural abounding. 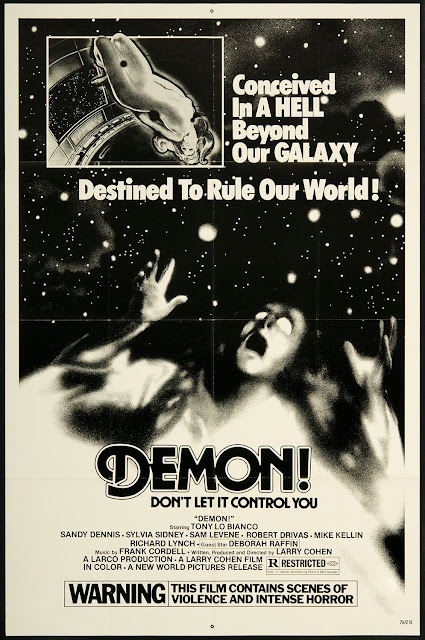 We meet Michael's girlfriend and ex-wife, both of whom he still seems to be friendly with. We learn that Michael is a devout believer in God. His journey leads him into the unnatural which slides over into the sci-fi vein when alien abduction becomes the possible explanation for a "man" who seems to have the power to order people to do whatever he wants them to do. Naturally enough the authorities are reluctant to reveal to the public such theories so Michael takes it upon himself to do so and promptly is suspended. But that doesn't stop him. 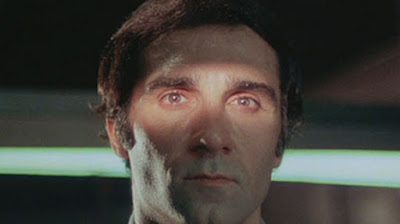 He suspects and soon so does the audience that Michael is specifically connected to the man named "Bishop" who is behind the killing spree and when we meet him he's clearly nothing from this world, or least not completely. After Michael confronts a woman who evidently was his own mother despite her status as a virgin and you quickly get the sense of what Cohen is driving at. 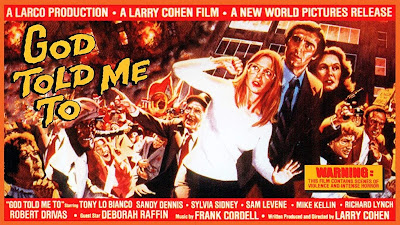 This is a fascinating movie, richer in texture than you'd expect from a relatively low-budget affair. The editing is a little awkward in places, but overall you have no trouble following the plot and there are some outstanding performances along the way. I'm glad to learn of it at long last.