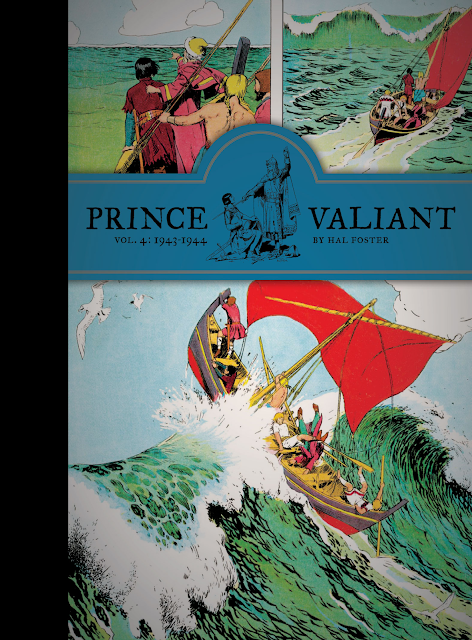 It's in these years of Hal Foster's Prince Valiant that many of the delicate threads of the saga show here and there in the series begin to weave together. When it began Prince Valiant was the story of a young and brash but capable youngster who wants to be a  knight in King Arthur's court at Camelot. Well that had been accomplished and we'd followed this knight errant as he and his allies had sought and fought across the face of Europe and Africa and beyond. Now we follow Valiant as he deals with threats in the homeland. Helped in no small measure by his squire Beric he heads back to Thule, Valiant's homeland won back in early stories by his efforts for his father. 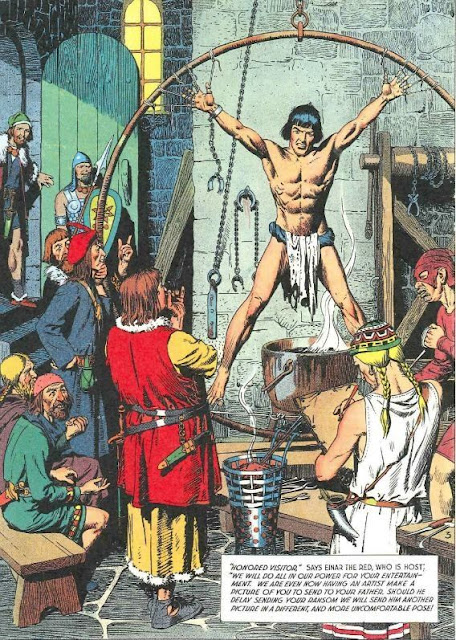 Beric is a reliable and capable squire and it can be said that this is the story of Beric's time with Valiant. They contract to board the large and impressive ship "Poseidon" which proves to be a challenge when the mighty ship cracks up and sinks. Never saying never Valiant and Beric find a boat and a small crew and get back to Thule, but not without adventure and misadventure. At home Valiant is instrumental in defending his father's kingdom from an uprising. He is then captured by allies of the renegade and tortured but of course he finds a way to win the day, though he suffers mightily. 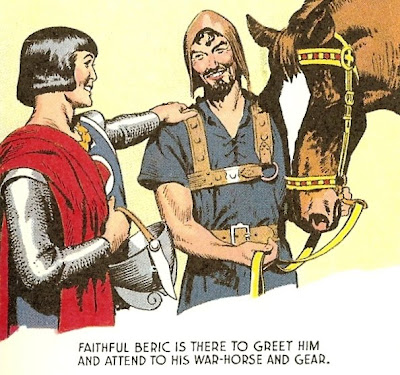 We follow Sir Gawain briefly as he and Valiant head off once again to find the Misty Isles once again and free Valiant from what he imagines to be a sorceress's curse, but which his father and the readers realize is love. Aleta has captured h is heart and the still young Valiant is not sufficiently aware to know what's happened to him. Foster has been quite effective over the course of the saga to show a number of couple's finding some measure of love and affection, and he has shown it in a myriad of ways. Valiant gets to the Misty Isles, finds Aleta on the eve of her own wedding and kidnaps her as the volume closes. There are echoes of Ulysses and Penelope in this segment of the love affair between Valiant and Aleta, a grand source for Foster to draw from. 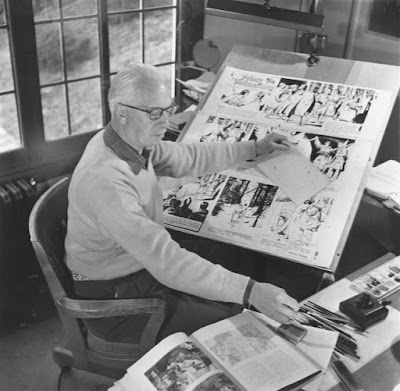 About half way through this volume Foster begins a new strip called The Medieval Castle, a story not connected to the Prince Valiant strip directly in anyway, The new material in that strip causes the Valiant page to shrink a bit and some of the grandeur of the earliest years is lost in the downsizing. But still yet it's a magnificent work.