The Story Of The Phantom! 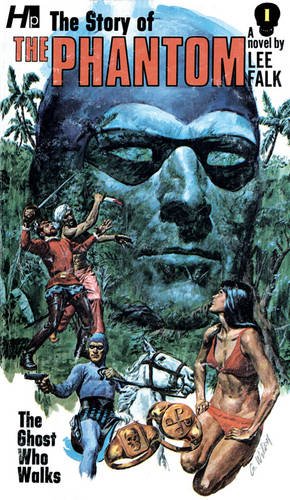 Hermes Press has had control of Lee Falk's Phantom for some years now, reprinting the comic strips and the comic books. The latter in particular have been a focus of my collecting and reading, owing to my keen interest in most things having to do with Charlton Comics. But another project that Hermes launched and just completed was a reprinting of the Avon novels produced originally between 1972 and 1975. I picked up a few of these from the racks way back then and enjoyed them, but never sought out the rest, though I never forgot them.

When Hermes began their reprint I found the new tomes were at once handsomely done, the George Wilson cover art getting a good display, and exceedingly readable. The latter has become something of an issue with the original books of the era given the page size and fragility of the books over time. To have these books in hand was a nifty idea and I dived in picking them up regularly. Recently Hermes has pushed to complete the run of all fifteen novels. And I'm beginning a reading of the whole set.

The books were written often by Ron Goulart, who it seems wrote most the books I read in my teenage years and beyond, though I didn't necessarily know given his penchant for pen names and ghost writing. Goulart is a name well known for his various histories of comic strips and comic books, a writer who it seems never ever stops. Others such as Basil Copper wrote some of the books, but most of them were either Goulart under the name of "Frank Shawn" or the Phantom's creator Lee Falk.

Lee Falk wrote the initial entry in the series titled simply The Story of the Phantom. It delivers on that expressed purpose and tells of the birth, boyhood and initiation of the twenty-first Phantom, the hero who is followed closely in the comic strips. Most of the information had already been developed in the strips themselves, but here it is collated for the fan and for the new audience coming to Lee Falk's creation only with the novelizations. It's a dandy and full of Deep Woods secrets and lore, a must read of any fan of "The Ghost Who Walks".

Next time I take a look at the second in the series titled The Slave Market of Mucar.