For The Challs' Pals! 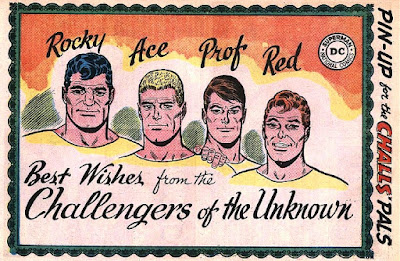 The Challengers of the Unknown are a throwback squad of men who have bonded one to the other in a pact of brazen heroism and selfless service. Ace, Rocky, Prof and Red were men ran into danger when wisdom decreed running away was the best solution.

Created in part by Jack Kirby, the four men are an adult realization of sorts of his kid gangs concocted with Joe Simon during the Golden Age of Comics. These are adult men, experienced skilled men who seek danger because as the story goes they are living on borrowed time. It must've been an attitude adopted by soldiers in wartime, a way to press forward when every atom of  you wanted to turn and just head toward home and quickly too.

The idea of four men bonding is one all too familiar to a generation which had fought a war or two to protect society. For us, long ago having let others fight for us and allowing cowardly braggarts to represent us, the idea seems retrograde and quaint, likely even sexist in some way. But for a generation which is nearly gone, one which shouldered a responsibility we can only imagine, it was a way to face up to and challenge the great last unknown indeed.