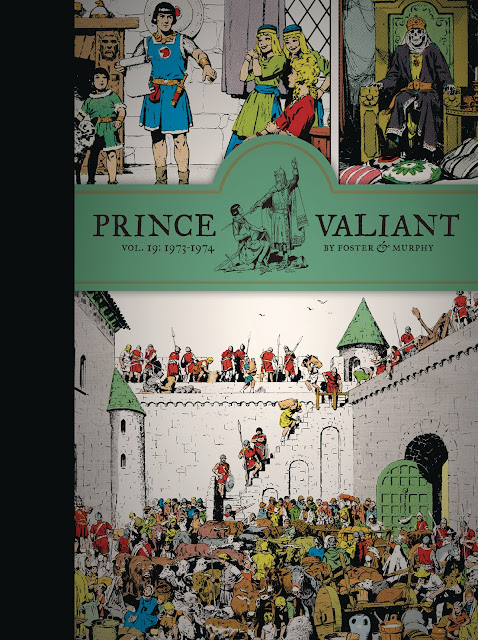 In Prince Valiant Volume 19: 1973-1974 by Foster and Murphy from Fantagraphics we have the first full volume not drawn completely by Hal Foster the creator of Prince Valiant in 1936. He is still writing the strip and laying it out, but John Cullen Murphy has taken over the primary art chores. In the volume begins with a reminiscence of Murphy by fellow comic strip maven Jerry Dumas 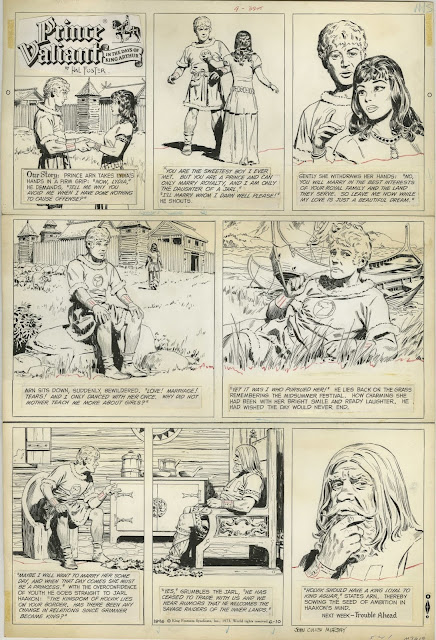 The saga picks up where it left off with the budding romance of Jacques the troubadour and the young acrobat Joan. They are married off post haste and the story quickly turns to Prince Arn who has found a friend in Boltarson, the son of Boltar, Prince Valiant's longtime ally and husband of Tillicum who was Arn's nurse. They head North and meet up with various adventures in which Boltarson questions Arn's bravery but quickly learns he has mistaken guile for guts. The duo make for Thule and soon Arn is sent on a mission to help install the new king of Holvik, who it turns out doesn't want the job. The heir Heidmar arranges to take the place of an ill-fated serf and rides off escaping his duties. The job of king goes to the untrustworthy Grimner and his chosen wife Princess Frieda. After that Arn encounters Lydia who stakes a firm claim on his young heart. When he is ordered to check on Grimner he is reluctant but does the job and helps to settle down the area which has been invaded by Wanderers. He is wounded and returns to Camelot where he convalesces thanks to Lydia while his father finishes his mission in Holvek. There is much treachery and both Grimner and Frieda end up dead and another is selected to be king, who it turns out is Lydia's brother. But when Arn sees Lydia meet her brother at the docks with much affection his tender affections are wounded so much he leaves Camelot without a word. Arn provisions a ship of Vikings but soon leaves them when they desire raiding over trade. He then grows up a bit and loses his fathers tunic design to fashion his own in red. He becomes a knight errant and soon has a clever squire in a loquacious fellow named Paul. They have adventures and even end up in a castle under siege. Seeing it is hopeless they escape but do rescue a lost young girl who they named "Squirrel". Paul becomes attached to her and eventually he marries and becomes a happy father of many. Arn then encounters Sir Gawain and the two go to fight jousts, some not fair at all. Meanwhile Lydia's brother is searching for Arn and eventually finds him and tells him the truth. Overcome with joy Arn is breathless to get to Thule. The two stalwarts find a hidden valley in which the people have been protected from invasion for two hundred years and later a castle in which the reluctant queen has been dead behind a locked door for over fifteen years while her mad lover waits for a word. Soon after and Arn  and Gawain part company when the latter heads home to Camelot. Arn encounters more Vikings, helps two young lovers find themselves and then when he gets to Thule he is reunited with Lydia at last. Prince Valiant becomes the focus when he goes to stop a giant warrior form terrorizing the district. He overcomes this threat with his usual cleverness and bravery. As the tome ends we are treated to the daydreams of young Galen and later yet another siege on a castle. But that story will be next time.

The extra treat in this volume is a classic Hal Foster piece from 1942 -- The Song of Bernadette which was a Book-of-the-Month Club offering. The complete piece is here. This installment wraps up "The Sunday Funnies" for at least the next month or more. Hopefully I'll be able to get back to it in November and bring more Prince Valiant to the Dojo. Until then.
Rip Off
Posted by Rip Jagger at 1:00 AM