The Eternals And The Dreaming Celestial! 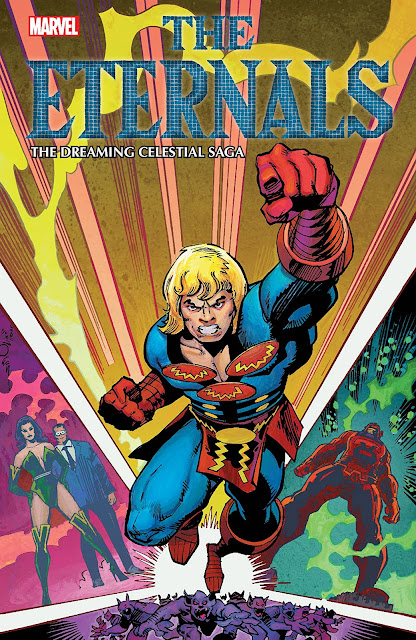 With the advent of the direct-sales market in the 1980's, comic book companies were able to offer up limited series which came in the three, four, or sometimes twelve issue versions. These were remarkable because it allowed for some characters to get a peak at an audience without a full-blown commitment to a series which might need canceling after only a few issues of poor sales. Among the most famous of the limited series of course was Crisis on Infinite Earths for DC and for Marvel there was Secret Wars. But there was also at Marvel a twelve issue series for The Eternals. This one was one written by Peter B. Gillis and drawn by Sal Buscema with inks in the early issues by Al Gordon. But before the limited could kick off there was some necessary housecleaning concerning the Eternals. But it didn't really start there. 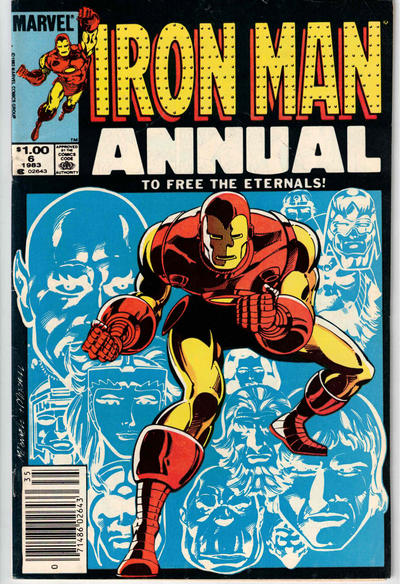 In the sixth Iron Man Annual the spanking new Iron Man Rhodey Rhoades discovers the Eternals and the Deviants and finds the former enslaved by the latter due to pernicious mind mines which render the Eternals powerless. There is just one problem with this story, and that's there are not enough Eternals. They are rescued right enough, but only in the final pages where they clean up on the Deviants. Zuras, the leader of the Eternals has been murdered though and that will have consequences. 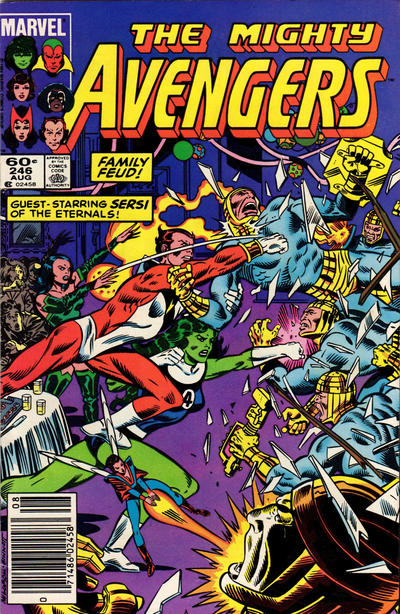 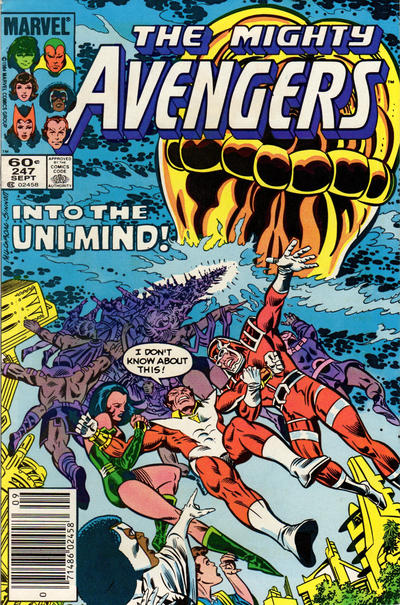 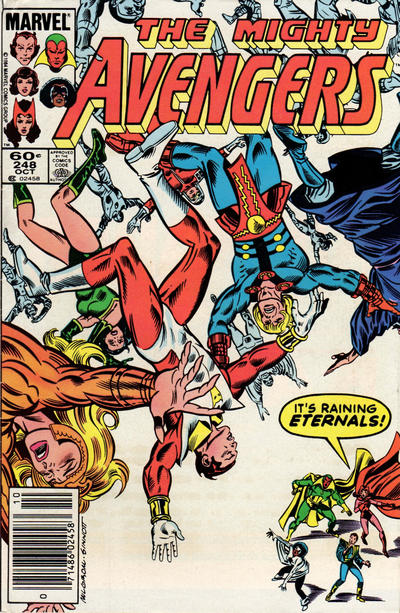 Next the Eternals show up in a trio of Avengers issues by Roger Stern and Al Milgrom, in which for the first time Eros of Titan learns of his heritage and its connection to the Eternals and Inhumans of Earth. It all begins with a party thrown by Sersi (a common event in Eternals stories) and before you know it the Avengers are part of a scheme by the bizarre villain Maelstrom (who is part Deviant and part Inhuman) to gain power when the Eternals are within the Uni-Mind. The upshot of this story is that with the demise of Zuras, most of the Eternal population decide to leave the planet Earth and seek their fortunes among the stars. 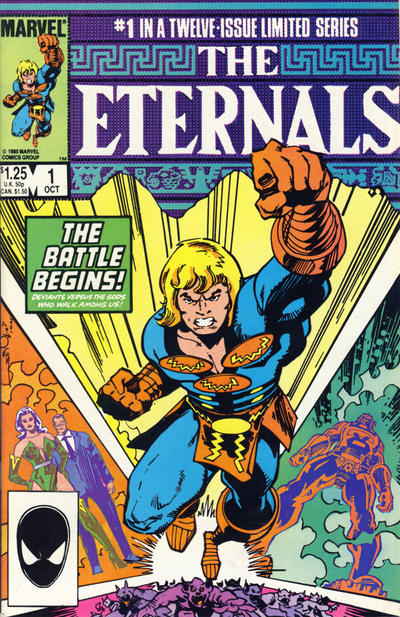 The Gillis-Buscema story picks up at this point and we find the remaining Eteranals are Ikarus, Thena, Makkari, Sprite, and Sersi alongside new Eternals Phastos, Korphyos, and Kingo. These seem to be Eternals who have done an especially effective job of blending into human society or have found singular purpose in the world. Thena seeks to become their leader and assume the power of Zuras and the others accept her but not with the respect she feels she deserves. Also on hand are the Deviant mutates Karkus and Reject (who is now called "Sweet Prince"). Also on hand is Margo Damian. 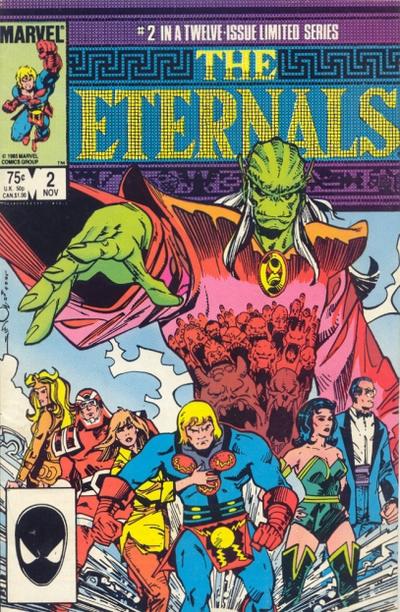 The main villain of this story is High-Priest Ghaur a priest of the Deviant culture and despite some shenangians by Kro who eventually assumes the leadership role in Lemuria, it is Ghaur and his Deviant cultists who have a plan to give them immense power over not only Deviants, but also humans and Eternals, and perhaps even the Celestials themselves. 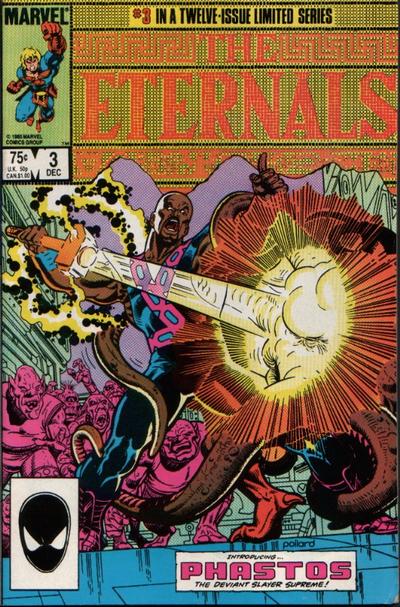 We meet Phastos who is something of a recluse but is of great benefit to the Eternals in that he manufactures many of their primary weapons. In keeping with the Eternals conceit that they resemble in many ways the classic Greek Gods, Phastos of course evokes Hephaestus from that pantheon. 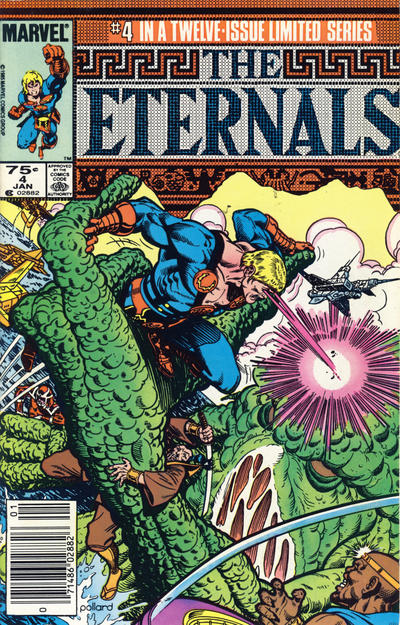 Kingo on the other hand is a Samurai who just so happens to also be an actor in Samurai movies. He has taken "Sweet Prince" under his wing and is attempting to cool the ferocious mutate's temper and make him an even more effective warrior. Much of the story in the early episodes concerns itself with Thena and her troubles as leader of the Eternals. Two things prey on her mind, one is a perception that she is not respected by her peers as was Zuras and her heartfelt affection for the Deviant Kro. The latter might go to explain the former. 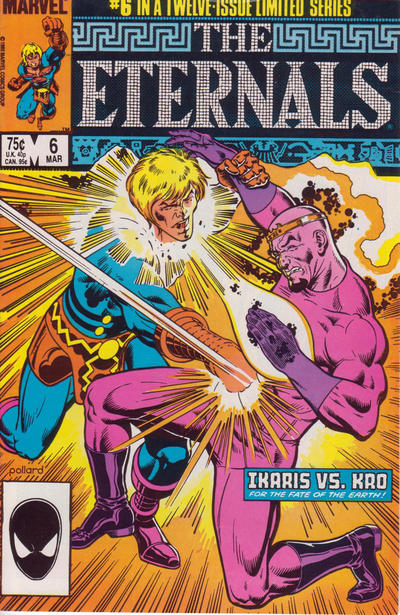 On the other hand Ikaris is proving to be a warrior of a relentless nature pressing always for the few remaining Eternals to go on the offensive against perceived Deviant threats. When the Deviants breach the Pyramid of the Winds which had been guarded by the Polar Eternals for untold ages, Ikaris is convinced they are up to dastardly deeds and he would be right. Their plot concerns the "Dreaming Celestial" a member of the Celestials' Second Host, this renegade was put down by his peers and entombed beneath the Pyramid of the Winds. 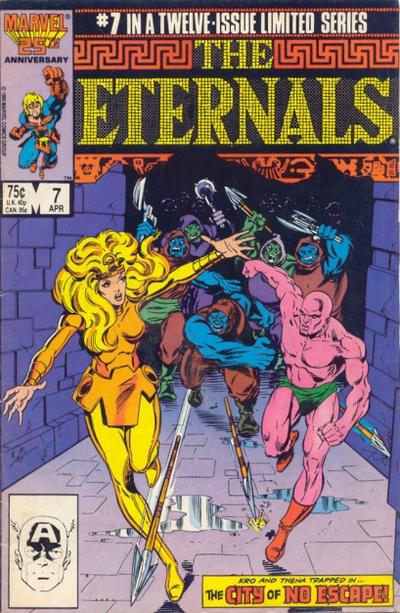 With Thena and Kro on the run from both the Deviants and the Eternals, as both are understood to be traitors to their kind, Ghaur gains access to the tools to revive the Dreaming Celestial and seemingly bend the mighty being to his will. 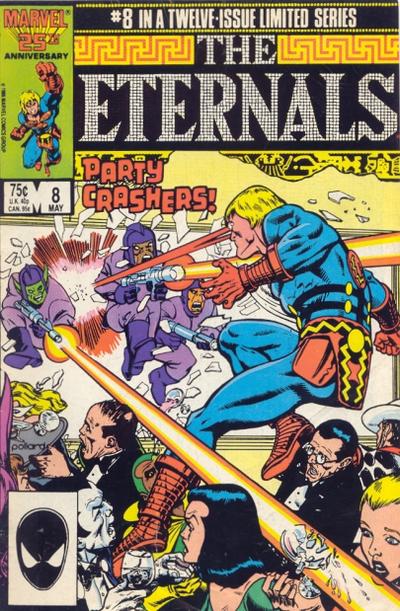 My favorite single story in this entire run (with the debut issue a close second) is issue nine which showcases one of Sersi's wildly entertaining parties. Many familiar faces and costumes show up as this is essentially a raucous comedy issue. So well done by both Gillis and Buscema, it's a damn shame that this is their final issue in the series. 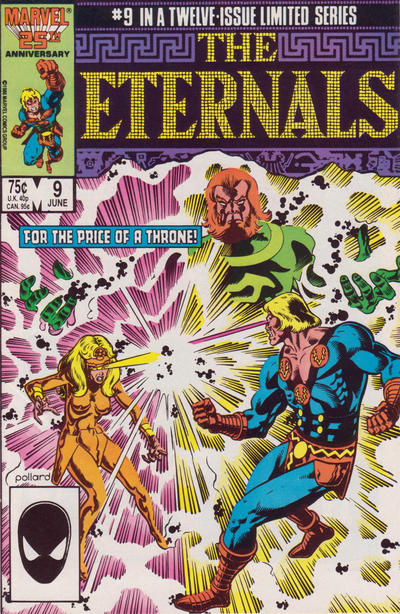 With the ninth issue Walt Simonson takes over the writing and Keith Pollard steps into the penciling chair. All I can find out about the change is that seemingly Jim Shooter did not particularly like Gillis's scripts so I guess that moved him on. Why Sal Buscema left with him is unknown, at least to me. 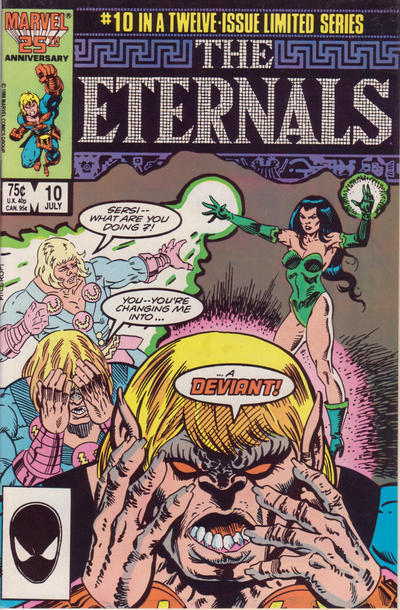 The story beings to wind up to its finale with the Eternals infiltrate the city of the Deviants in an effort to stop Ghaur's schemes. Thena and Kro as well as Margo Damien are in the city as well. 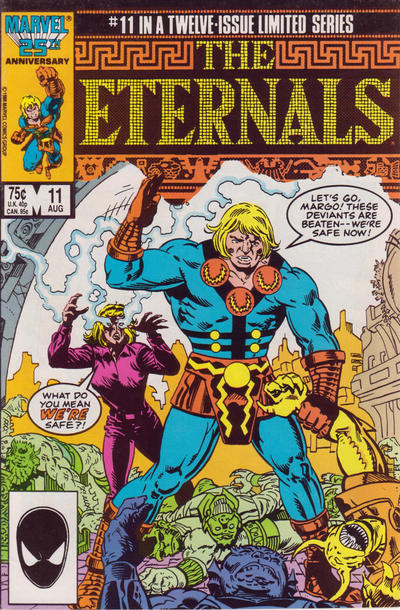 Spoiler Alert: Sadly, this story sees fit to kill off Margo Damien, though the plot device is used to send an attack out on Ikaris. The death of Margo was unexpected and really didn't add up to much given how long she'd been in this storyline, from the very beginning in the original series. It left a sour tasted for certain. End of Spoiler Alert. 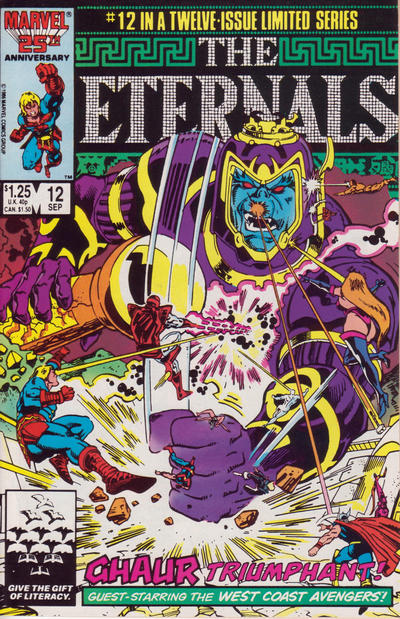 Paul Ryan takes over the pencils in the finale with Ghaur having gotten the power of the Dreaming Celestial and seemingly having become him to some degree. How it all ends I'll leave out of this review, but I will note that weirdly the Eternals seems to fade from this final chapter and the newly organized West Coast Avengers handle a bit more of the fight that I'd have imagined. This is a series that begins with a great deal of energy and does a fine job of freshening the Eternals concept for the 80's Marvel Universe. It's a shame that Gillis and Buscema were not allowed to complete their work as I suspect the finale would've been a bit better. Still and all it's a rousing read for Eternals fans.
Rip Off
Posted by Rip Jagger at 1:00 AM