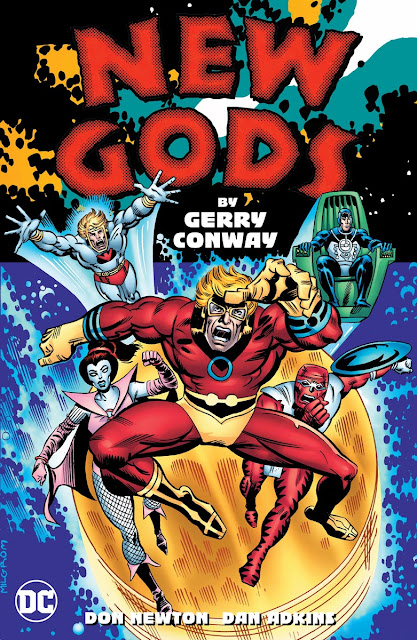 The Anti-Life Equation is the deadly secret over which the war between New Genesis and  Apokolips is fought. It's an way to access a power to rule the minds and wills of other people, to effectively turn others into your willing servants and slaves. On the Fourth of July there could hardly be a better subject to discuss, as freedom and liberty are the focus of this holiday here in these United States of America. Jack "King" Kirby was a guy who fought for liberty in real palpable and life-threatening ways during World War II. He was a man who was and enormous talent but even more enjoyed his freedom to create as he chose. But the rigors of raising a family and meeting their needs has made many a person turn from the purity of their principles. Freedom doesn't feed the baby all by itself as much as we cherish it and so sometimes we give up aspects of our freedom, become de facto serfs to systems which use our talents to larger and sometimes even greater well-meaning ends. Getting men and women to surrender their liberty is what Darkseid wanted in the end. 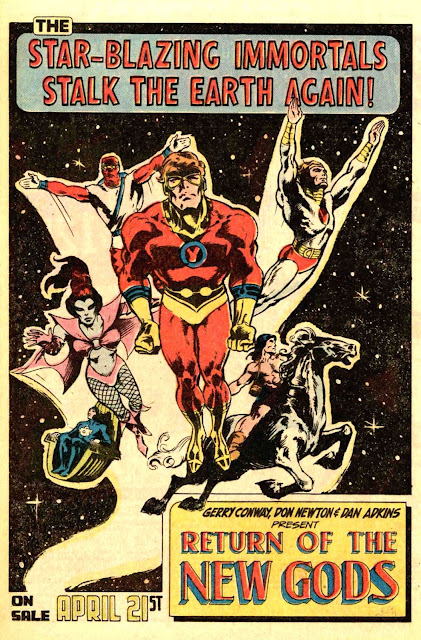 Darkseid's plots had been dormant since the final Jack Kirby issue of Mister Miracle until he popped up again as the mastermind behind The Secret Society of Super-Villains. That is save for the one issue which heralded the "Return of the New Gods". The series is written by Gerry Conway and drawn with consummate skill by up and coming Don Newton. Newton doesn't attempt to ape Kirby, but instead brings an atmospheric feel to the stories all his own. 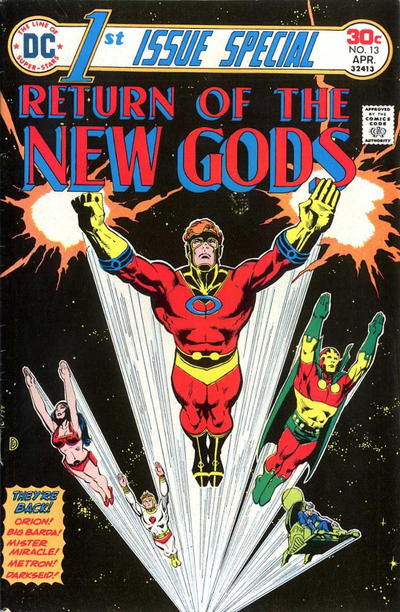 1st Issue Special #13 landed on the racks in January of 1976 and it shows just how eager DC was to exploit Kirby's Fourth World creations. He had just left DC and his final work on Kamandi was hitting the stands just as his first Captain America work from Marvel was bringing a whole new chapter to the Kirby saga. But DC had told Kirby these characters weren't profitable and that's why his Fourth World tetralogy had been largely cancelled after the first few years. But literally the door hand not quite slammed shut and they rushed a new version onto the racks. The story by Denny O'Neil and Mike Vosburg reignites the war between New Genesis and Apokolips and sees a differently garbed Orion press the fight to Darkseid's own doorstep. It would be a year before more was done, but when it was done it was done quite well. 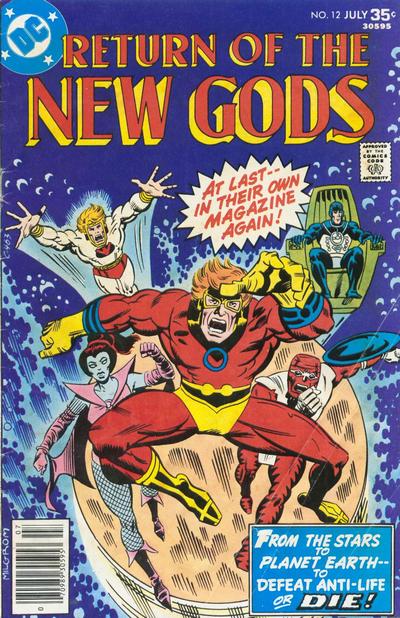 When the New Gods did return in regular order it was with a flourish and they picked up their old numbering as Gerry Conway and Don Newton crafted some new stories in what would become one of DC's key mythic arenas. In Return of the New Gods #12 meet the New Gods as they are dispatched first to the abandoned Moon base of Darkseid and then to Earth where six New Gods find they have a human to protect. Each human has part of the Anti-Life Equation and must be protected from the warriors of Apokolips. Joining Orion, Lightray, and Metron are the Forager the Bug, Lonar and his steed, and a new character named Jezebelle. 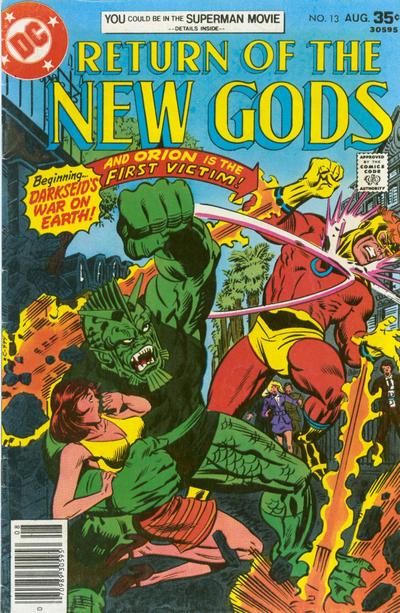 The Gods are met with different emotions when they try to rout the attacks from Apokolips, specifically the attacks of the Deep Six. Orion is able to save  the humans but only by killing (again) his enemies. 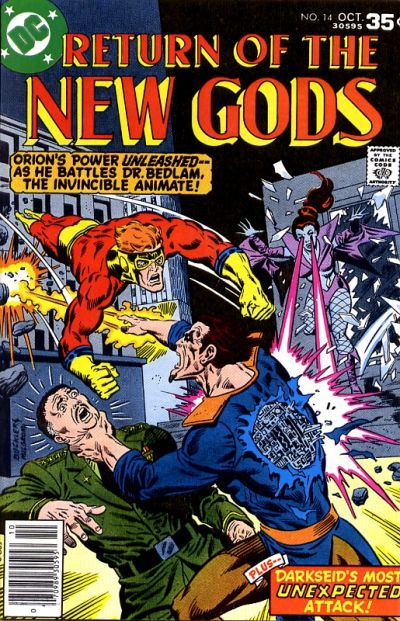 All of the New Gods are called upon across different parts of the world to battle against Doctor Bedlam who is even more powerful than ever thanks to Darkseid. 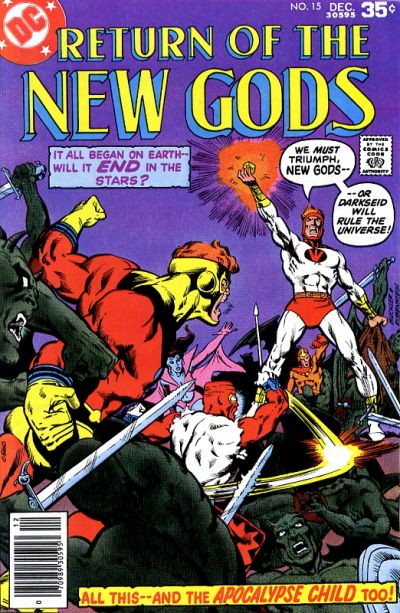 The ongoing battles result in a tragic loss for the New Gods when Darkseid at long last gets his hands on part of the Anti-Life Equation. Also a strange new pact of sorts is made between New Genesis and Apokolips.  This issue was drawn by Rich Buckler who is the best of all the artists of his generation of evoking the "King". 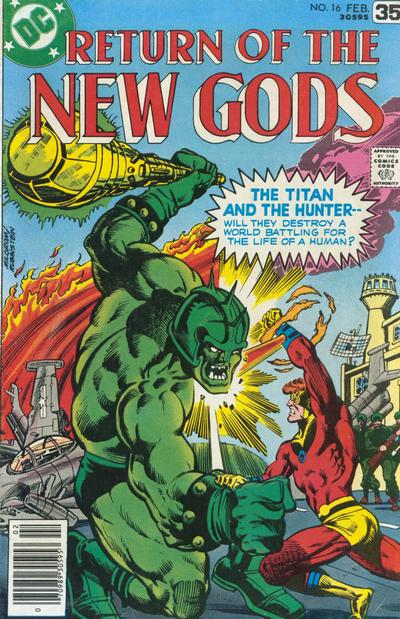 Darkseid is able to strike at the very heart of the society of the New Gods, but still they battle taking the war to the enemy in some familiar locales from the classic Kirby run. 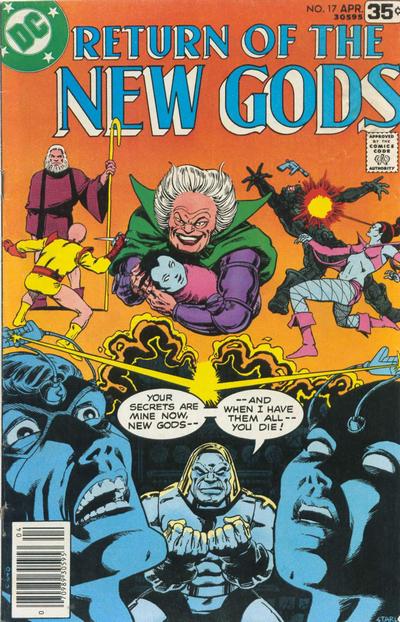 We learn again about the origins of Orion and why he's so dedicated to defeating his father Darkseid and we at long last learn that Jezebelle of the Firey Eyes is in fact another defector from Apokolips and the untender care of Granny Goodness. 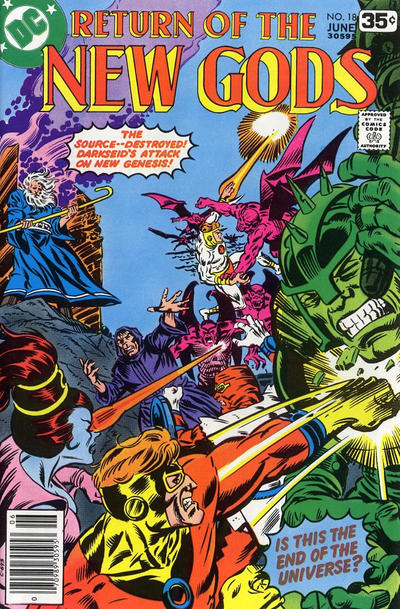 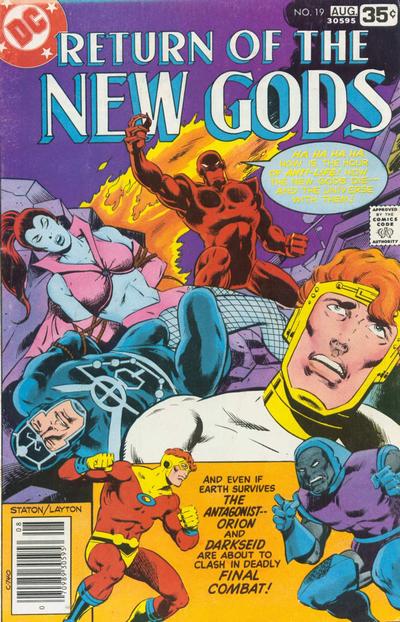 Ultimately as the series ends for a second time with its nineteenth issue the surviving New Gods fight together on Earth even as the secret of the Anti-Life Equation is captured by Darkseid and used by him to bring the world to its knees. We learn that the Infinity Man and the Forever People have a role to play yet in this drama, but as the series itself closes out, the story moves over to an expanded Adventure Comics. 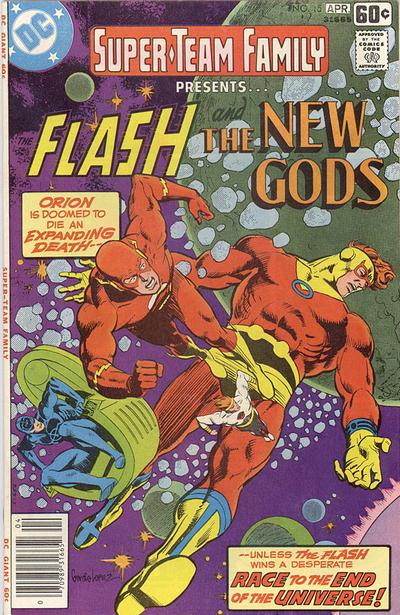 This collection has Super-Team Family #15 appear at this point in a story in which the Flash meets up the New Gods to save Orion and more beyond. There is a reference in the upcoming Adventure stories to this episode, but frankly it's not all that good. Despite being written by Conway, the story doesn't feel much like a New Gods story at all and in the context of the larger epic is utterly forgettable. 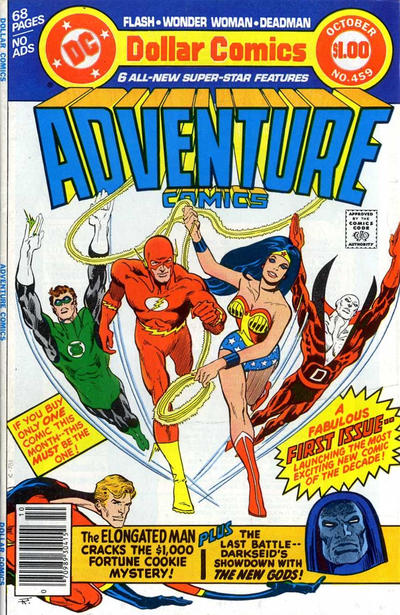 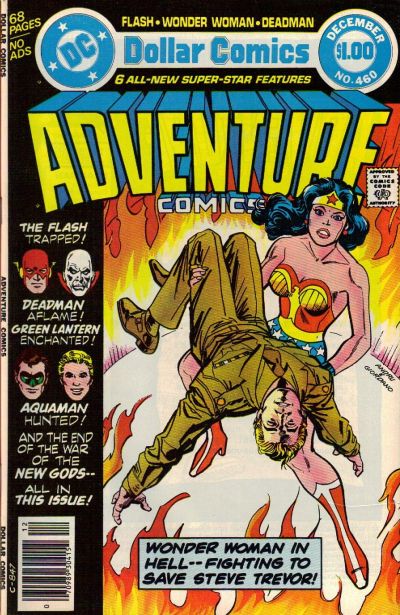 The sage of the this third conflict between New Genesis and Apokolips wraps up in two issues of Adventure Comics and that's fortunate, because these stories might well have been consigned to the limbo that the DC Implosion created for so many finale issues. We get an ending, and the war is won of course, but you already knew that. Darkseid is dispatched, the status quo is not quite brought back, but for my money there is an incomplete and somewhat wrongheaded understanding of the Anti-Life Equation in these last several installments. It seems to be a device to make anything possible when I've understood it to mean control over all thining creatures, as if that wasn't enough. 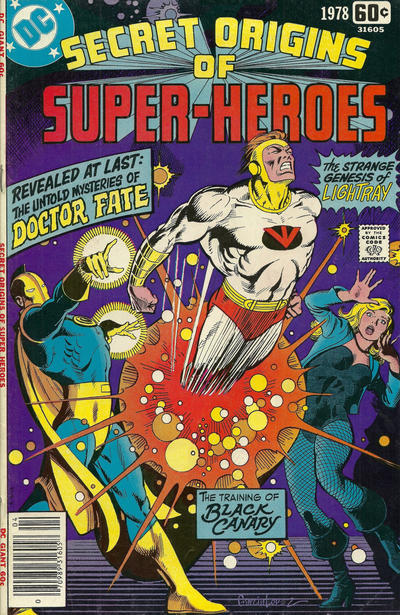 We also get this little yarn by Conway and Newton which reveals how Lightray got his powers. I didn't realize that required an explanation, but someone seemed to think so and what we have actually reads a bit like an adventure of "Little Orion" and his buddies. 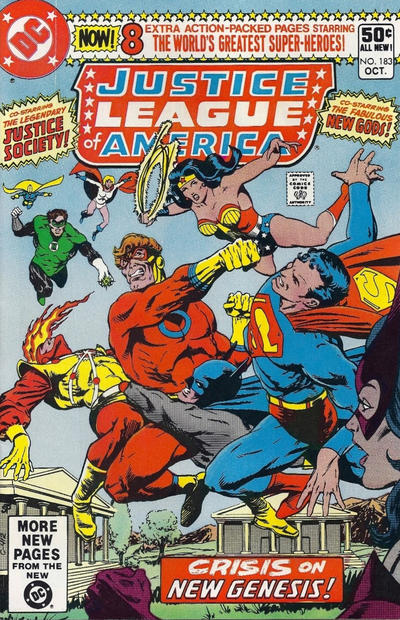 The story finally wraps up a few years later in the pages of Justice League of America when the New Gods become part of the long-standing tradition of including a third in the annual date of the JLA and the JSA. Justice League of America #183 is significant in many ways, not least of which is the hint of the return of Darkseid after what seemed a pretty grim demise. But for me personally this issue is a heartbreaker because it is the last issue drawn by the great Dick Dillin. I still remember reading the notice as I stood in the grocery line to pay for the book. It was a sad moment. 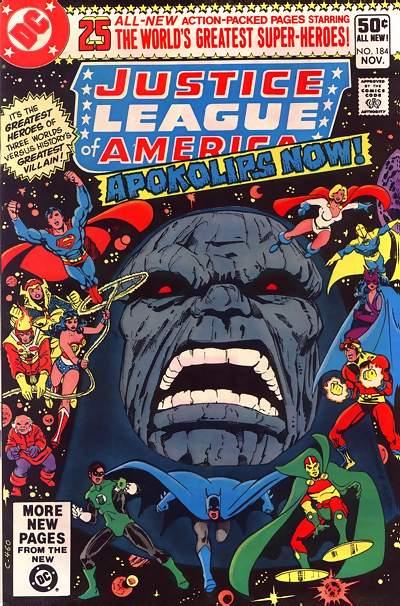 But my sadness over Dillin's passing was salved by the next month's issue featuring George Perez's debut on the book. He was considered one of the great up and coming talents and his work on The New Teen Titans was magnificent, but with this gig he became a bonafide super-star artist. He does a fantastic job of telling this jam-packed story. We have a handful of superheroes from Earths 1 and 2 alongside the New Gods trying to rescue the people of New Genesis trapped on  Apokolips and attempting the resurrect Darkseid himself. 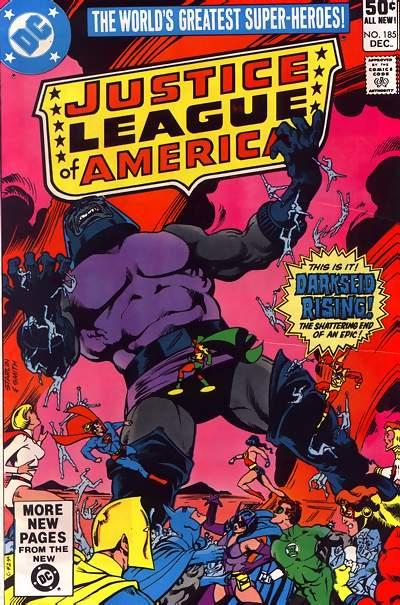 As with most of these "Crisis" epics the story moves at a breakneck pace but Conway and Perez keep the ride vivid and lively. The ending is abrupt but that was not uncommon with these stories. Suffice it to say that when this story was done, so was DC at trying to get others to tap into the potential of Kirby's great Fourth World creations, at least for a little while. 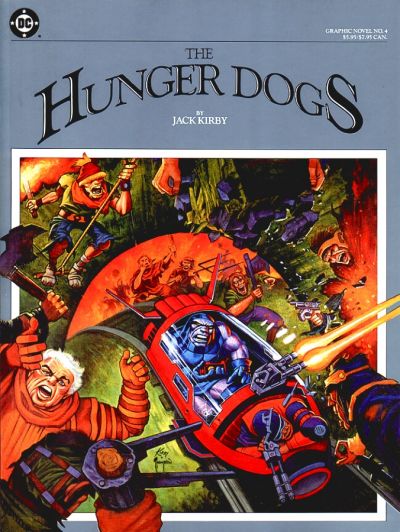 Before the cataclysm which was the Crisis on Infinite Earths Jack "King" Kirby would be invited back to bring his epic saga to some conclusion. And when he did it, the stuff produced by other talents in these tomes was whisked away into the ether of the fanboy's memory and imagination. It was as if these stories never happened, but then of course they did. That''s the delight of a world without "Anti-Life", I am free to remember and think what I choose. That's the lesson of the Fourth of July and also the lesson of the fabulous Fourth World.