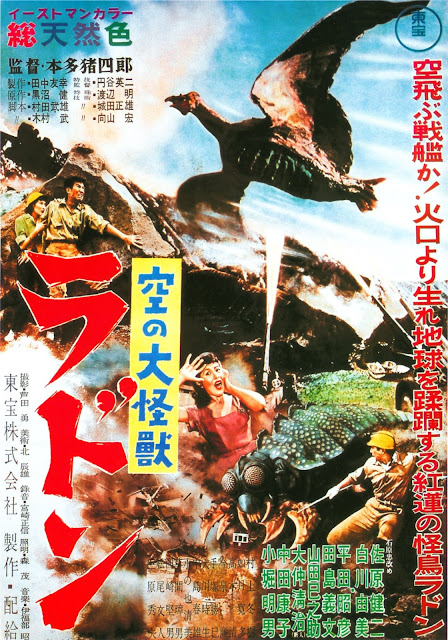 Rodan is one of my favorite Kaiju movies. Though it doesn't star Godzilla and though Rodan himself is not the sexiest of monsters, the movie succeeds on the sheer strength of really good storytelling. Rodan does the best job since Godzilla itself of presenting strong well developed characters who are involved with one another before they are drawn into the larger melee of monster madness. The story of Rodan is brilliant in that we begin with a small mystery, a horror yarn really about killings in the depths of a wonderfully realized coal mine. This yarn spins out with great attention to detail before the threads of the larger tale become clearly seen by one and all. When Rodan appears there are still more surprises to see, not the least of which is the that there are two. This is a movie which does a fine job of keeping the watcher engaged on all levels. 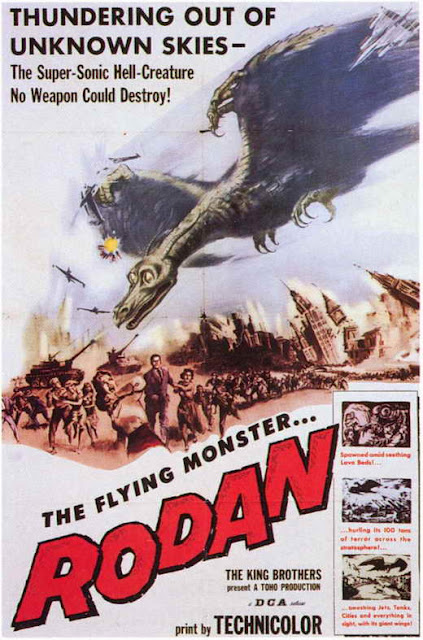 Rodan holds up exceedingly well after all these years because it is so very well constructed as a story of horror and threat. Rodan's power of producing enormous winds is one aspect of the bomb which was not included in the elegantly designed Godzilla himself, the shock wave is terrifying. Since the Rodans are once again products of radiation, the sins of man come back to haunt him quite literally as the skies become havens for threats. Watching the skies is a warning about space aliens, but of course it's really a shout out to be aware of pugnacious neighbors right here are on Earth who would do us harm. The Japanese, and Honda were all too aware of the nightmare which can arrive via the air.