Tohope And Change - Destroy All Monsters! 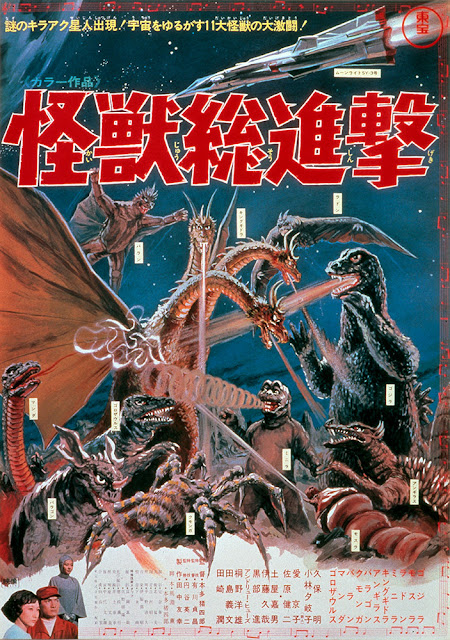 Destroy All Monsters is one of those movies which eluded me for a very very long time. I never saw it on TV and never came across a VHS or DVD of it until several years ago. Now I own it twice and that's just fine. It's a delightful romp of a Toho kaiju flick with monsters from all over making appearances. This one has aliens once again taking control of Earth's myriad monsters and using them to make mankind kneel. This is the movie that introduces what will become "Monster Island", a remote place where Earth's monsters live in relative harmony until the mavens at Toho require their presences in a good old monster flick. The difference in this one is the global nature of the threat. While as usual Japan leads the counter-assault the menace is a clearly presented as a worldwide one with monsters targeting cities all across the globe. King Ghidorah makes his usual appearance as the space monster who is opposed to all of Earth's more amenable monsters and his identity as a villain is reinforced. This is a monster rally of the purest kind, probably not a movie which is as emotionally involving as early kaiju which work diligently to create characters we care about, but it is a feast for those who love seeing monsters amok.