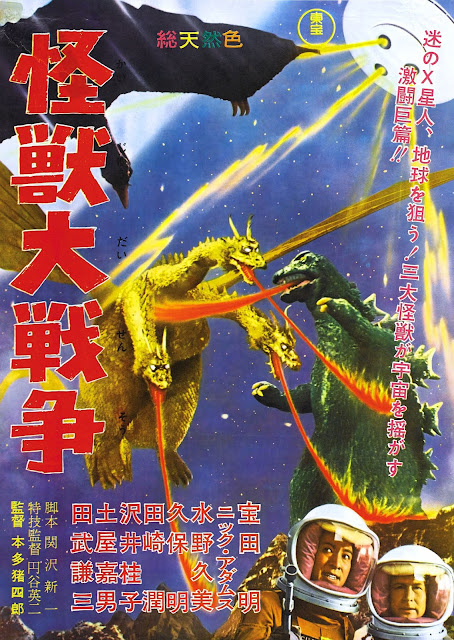 Monster Zero otherwise known as Invasion of Astro-Monster is likely the second Godzilla movie I ever clapped eyes on. This is the second of three co-productions between Toho and UPA to attempt to find purchase in the American market in a more coherent fashion. That really didn't work, but that doesn't stop this movie from being a real humdinger. The basic plot of Godzilla Vs. The Thing is picked up up with the addition of Nick Adams as one of our stalwart spaceman heroes. Aliens invade the Earth with the help of King Ghidorah after first pretending to be the friends of Earth men. This time it's up to Godzilla and Rodan to fend off the invaders. 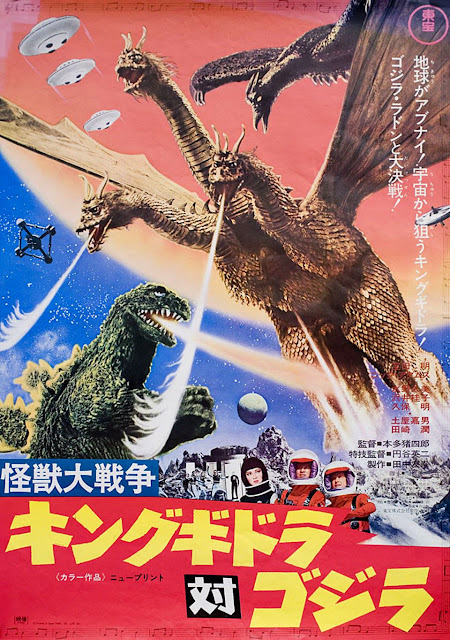 A standout performance in this movie and one of the most memorable in any kaiju flick is Kumi Mizuno as the alien temptress who is turned by love into a defender of Earth, but who loses her life in the process. The aliens in this story are more completely realized than in the earlier movie and their inhuman nature is more thoroughly explored such as the detail that all of their women are identical. This notion of sameness, of loss of personal freedom is a key theme in one of Honda's most successful stories. With Godzilla and Rodan already established as protectors of Earth, there's little need to develop that notion much and the increasing affinity audiences have with the living H-bomb and his flying buddy is at once understandable and odd.

Today we have a double bill. More to come in just a few hours.