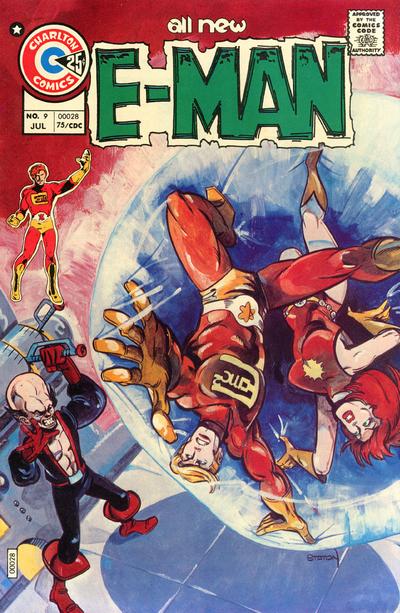 E-Man Volume 3, Number 9 is dated July, 1975. It was published by Charlton Publications, Inc. The editor is George Wildman. The cover was painted by Joe Staton.

"Prologue! History of E-Man and Nova" is a one page retelling of the backgrounds and origins of E-Man and Nova. E-Man is a thousands of years old sentient packet of energy from the stars who came to Earth and has become a superhero and Nova Kane is his girlfriend a burlesque queen who was exploded to atoms but reformed with identical powers as her boyfriend.

"The Genius Plant" was written by Nicola Cuti with art by Joe Staton, and colors by Wendy Fiore. The story begins on a local baseball field where after a game Nova rushes to giver her boyfriend E-Man a kiss since she believes he was playing first base. But it's a stranger she kisses as E-Man literally changes from being the actual first base. The couple walk down the street and take note of an election sign for "Ron Davis" who they think looks like Professor Wright of Xanadu University, but on second look they decide it is merely the pronounced high forehead that makes them think so. Teddy is having fun with the local dogs.

Nova then goes to interview Wright for the Xanadu Gazette while E-Man goes to join Mike Mauser in an investigation. Nova finds Professor Wright afraid of someone he called "Genius One" and suddenly the Professor undergoes a transformation as his large cranium shrinks to a more normal size and his intelligence seems to suffer as well. Then a flying robot breaks through the window and kills Professor Wright. Nova blasts the robot and dons her combat costume. Walking outside she is stalked by another robot but E-Man disguised as a lamppost blasts it. Mauser is nearby hiding in a trashcan. Professor Wright had been part of their investigation.

Back at Mauser's office he explains the case concerning a large group of highly placed genius types with giant craniums who have come under suspicion. Then General Dove shows up and reveals that through Professor Wright they have learned that these geniuses seem to have a base in on an isolated island. He recruits E-Man and Nova to infiltrate the island base and report back.

Part II begins with E-Man and Nova going undercover and underwater disguised as dolphins and later taking flight as birds. They discover a field of peculiar plants being guarded by robots and they come under attack, specifically they are captured in giant bubbles and taken to through the complex filled with giant-headed people to the office of Genius One, the leader of the group. His name is Carl Metz and he and Professor Wright discovered a plant which when eaten increased brain power and eventually brain size. Recruiting students and feeding them the brain food, Metz eventually left behind his reluctant partner and established his island base from which they plan to use the plants to transform mankind and the world, making it a paradise Genius One will control.

Nova and E-Man escape and flee through the complex when Nova has the idea for them to go inside the computers where she increases the plant food schedule making the peculiar plants explode. Deprived of their brainpower source the island of geniuses and Genius One in particular begin to lose their edge. The island comes under attack led by General Dove but when the forces break into Genius One's office he has suffered a dramatic loss of his brainpower and his brain size, in fact he is dumber than he was originally. Returning home Nova finds Teddy reading a magazine and suspects he's eaten some of the brainpower plant but it turns out to be E-Man playing a prank on his partner.

"E-Mail" offers up only a single letter of comment this time, a detailed panel by panel analysis of the sixth issue. Again the writer makes the mistake that "Nicola" must be a woman though. 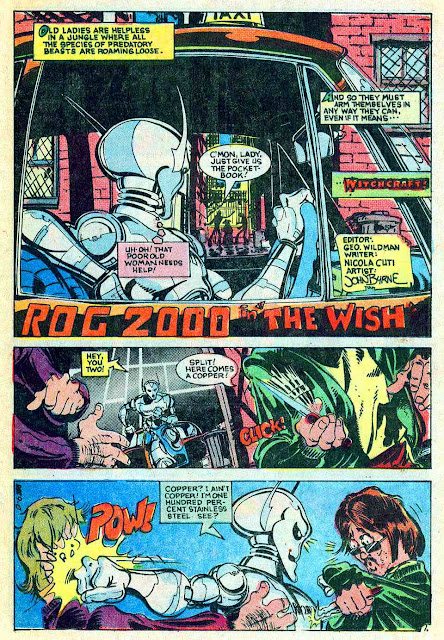 Rog-2000 returns in a story titled "The Wish" written by Nicola Cuti and drawn by John Byrne. The story begins with Rog in his cab seeing a little old lady being mugged. He rushes to defeat the muggers and the lady turns out to be a witch who offers him one wish. He disbelieves her and takes the thugs to the cops. But the lady thinking she knows what he'd have wished for changes Rog into a human being. At the police station he suddenly is unknown and scoffed at by the police. Distraught he takes to the streets but is mistaken for a criminal named "Duck" Griffin by two hoodlums who want to kill Griffin. They yell "Duck" before they shoot, but Rog thinks that's an instruction and follows suit saving him from the bullets. He runs to escape the killers and gets on a local subway train where he finds the witch. He demands she change him back which she does and the constituted Rog-2000 quickly disptaches the two killers. The witch asks Rog what is wish is since he still has one coming to him, and we next see her standing standing between two devils in a rather hellish landscape.

To read this story in its original form see this link. 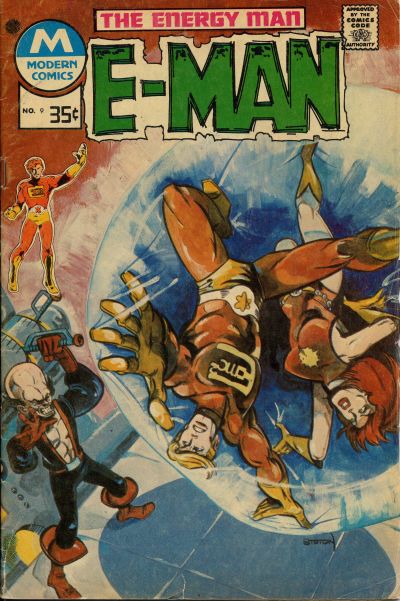 The whole comic was reprinted in 1977 under the Modern Comics label. 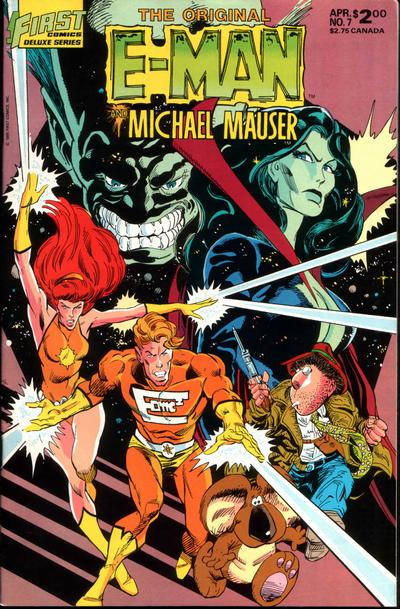 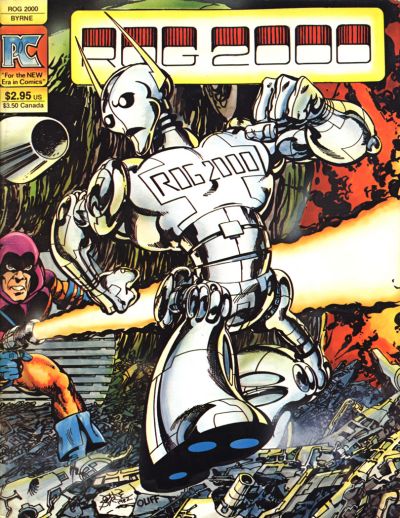 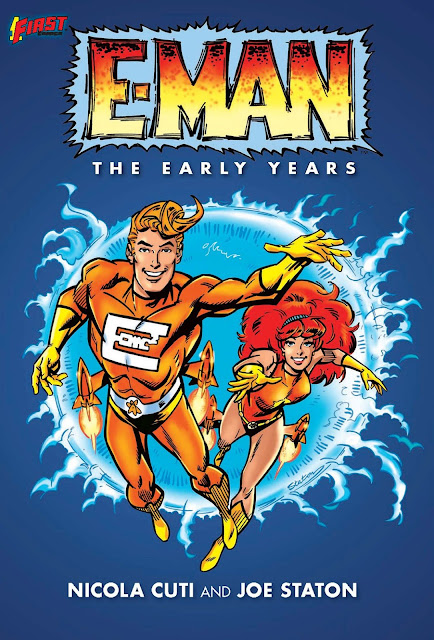 This is decent solid E-Man adventure. E-Man and Nova interact very neatly in their first true case together with Nova already showing that her wits are still arguably her greatest asset. Giving her superpowers was an attempt to inject some juice into the lagging series, and it does so. I'm not sure if I prefer old regular human Nova or the more superduper one, but regardless Cuti does a fantastic job with characterization so she's recognizably the same.

General Dove is a fun looking character, and according to interviews he was based on a Herb Trimpe character in the Hulk. I can only imagine that was Colonel Armbruster who apppeared in some Hulk stories about this same time. The two military men do look similar as you can see below.


Once again Mike Mauser shows up at the beginning of an adventure then disappears at its conclusion. But as it turns out he does have something to do. 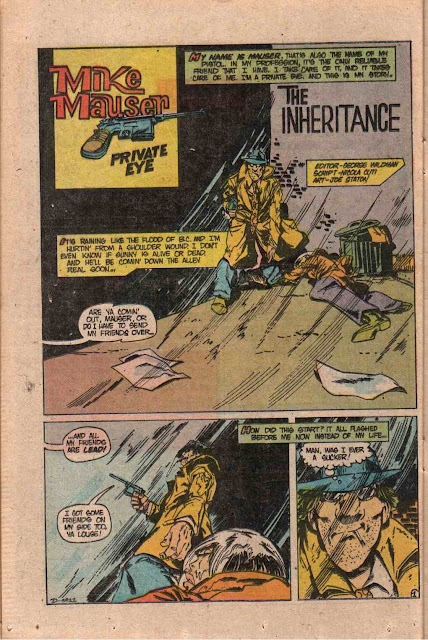 The first story is titled "The Inheritance" and was written by Nicola Cuti and drawn by Joe Staton, and focuses on Mauser's noir aspects. No other members of the E-Man cast appear in this initial story, though Rosie Redd will ultimately appear. Likely I will be doing a series of reports on this series soon.

If you would like to get a glimpse of Mauser's debut check out this groovy link.

Next time we wrap up the regular run of the series with a glimpse into E-Man's rustic past.