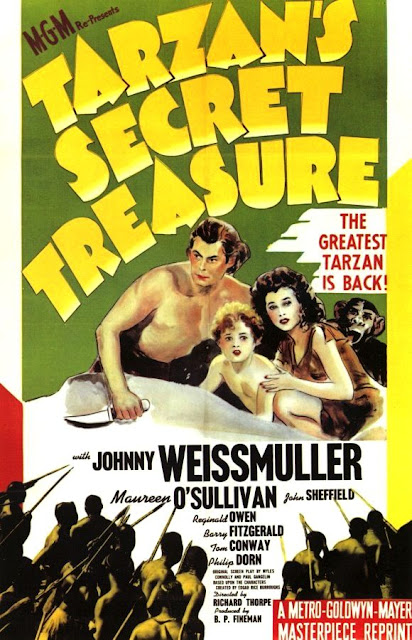 Tarzan's Secret Treasure is the fifth of the MGM Tarzan movies. With the addition of Boy in the last movie, the cast was established...almost. This movie sees the addition of Tumbo, a native boy, a "pickaninny" as one of the cast unfortunately refers to him later in the flick who gives the Mutia Escarpment family a little ethnic diversity as well as giving Boy someone to talk to besides himself and Cheeta. The story begins naively enough atop the escarpment when the Tarzan clan (Johnny Weissmuller, Maureen O'Hara, and Johnny Sheffield) are frolicking and Boy picks up some gold nuggets from the river bed. Jane tells him what evil gold can do, but says also that it can bring things like airplanes and such. Boy wanting some of that experience, takes a few gold nuggets and leaves home and drops off the escarpment to find his way to a nearby Ubanda village where sadly a plague is underway. He saves a boy named Tumbo (Cordell Hickman) from a rhino and they arrive in time for Tumbo to see his mother die from the plague. The natives blame Boy for the disease and seek to burn him at the stake but he is saved when a safari arrives and they drive off the natives. A hectic battle ensues and the safari is under severe threat when Tarzan shows up and saves the day. To repay the men for saving his son, Tarzan agrees to take the safari, who are seeking only to research a remote tribe over the escarpment and to a shortcut to their destination. But along the way Boy tells two of the men Medford (John Conway) and Vandemeer (Phillip Dorn) about the gold and they get new ideas. The leader of the safari Professor Elliot (Reginald Owen) wishes only to honor his agreement with Tarzan and when Tarzan helps cure the comedy relief member O'Doul(Barry Fitzgerald), Elliot is even more convinced. But he contracts the disease and is allowed to die by Medford and Vandemeer who trick Tarzan away from the escarpment long enough for them to kidnap Jane and Boy. When Tarzan returns Medford blackmails him into showing him where the gold vein is located then seemingly shoots Tarzan in the back. The safari heads out but soon enough is captured by a hostile tribe who torture and murder the bearers. They take the rest of the safari down river. Meanwhile O'Doul has tricked his greedy comrades and gone back with Tumbo to rescue Tarzan and they race to save the safari. But despite a furious river battle, only Boy and Jane are saved. Medford and Vandemeer are killed by crocodiles as are many of the ferocious natives. The Tarzan clan plus Tumbo see O'Doul off atop an elephant as the story closes. 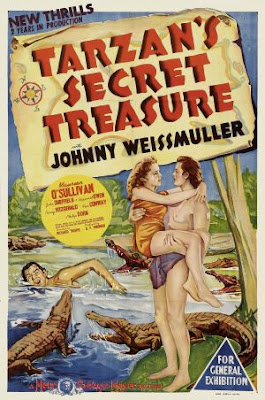 This one is pretty exciting actually. The formula is pretty fixed at this point and there are enough variations in this one to keep it fresh. The interaction between Boy and Tumbo gets somewhat tedious and the desire to give Boy a playmate is understandable, but frankly a little rewriting and poor Tumbo becomes totally unnecessary to the plot. It is refreshing though to see a black character with some attempt at depth. Cheetah does some dandy tricks this time, this particular Cheetah looking a bit younger and very nimble. The idea of Tarzan and his family sharing the escarpment with giant apes has been missing for several movies now, and all the "apes" are chimps. The use of the elephants as cavalry is even given a twist when instead of storming yet another native village, this time the elephants block boats on the river causing all sorts of death and mayhem. The crocodiles are retreads though as the croc battle with Tarzan from at least two previous movies is dusted off and shown again, at least in an abbreviated form. On the upside, the swimming looks great and there is a great scene where the Tarzan clan dives into the river one after another. It's spectacular and must've been a hoot in the theater. The villains in this one are reasonably dastardly, especially Tom Conway who sneers wit the worst of them. Reginald Owen is pretty naive and Barry Fitzgerald is pretty funny here and there, though his ability to keep up with Tarzan as he races through the jungle is extremely far fetched. But then this is a Tarzan movie and far fetched is the order of the day. 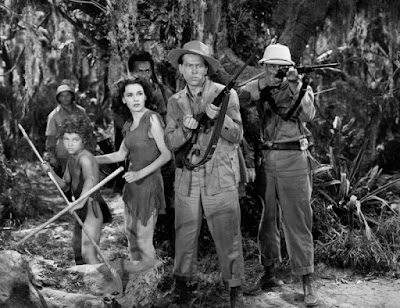 One nice thing in this one was a scene with just Jane and Tarzan which intentionally attempted to evoke the classic romance scenes they shared in the first two great movies. They cuddle on the river bank in and look again like two lovers and not just a jungle Ozzie and Harriet. It adds some spice to think that there is still some bungling going on in the jungle after all. 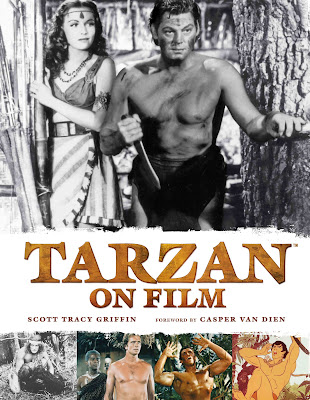