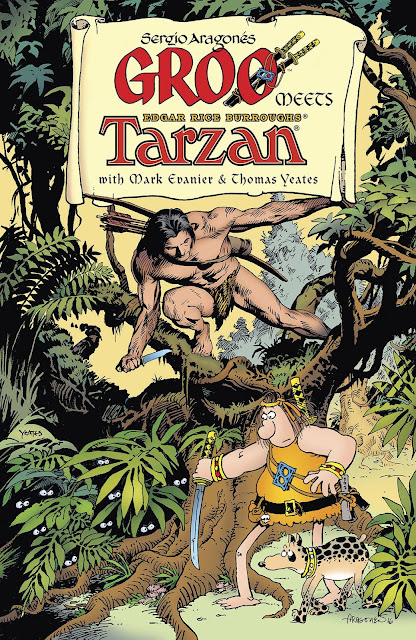 I buy very few new comics these days, preferring to spend money and time on vintage collections of comics from years gone by. But when I saw Groo Meets Tarzan advertised I knew I would be getting it. I held off picking up the individual issues, preferring to wait for the inevitable trade. The small wait was worth it. Once again Serio Aragones and writer Mark Evanier have turned in a fascinating story about the world's most incompetent sword-wielding barbarian. The Groo duo are joined this time not only by regular letter Stan Sakai and colorist Tom Luth but by Thomas Yeates. Yeates drew the parts of the story starring Tarzan just in the same way that he did for the earlier offbeat dust up between Groo and Conan the Barbarian. This kind of work requires a great deal of planning but when it works as well as it does in these issues it's well worth the effort and the price of admission. Be careful reading below as I've included many spoilers.
SPOILERS BEGINNETH! 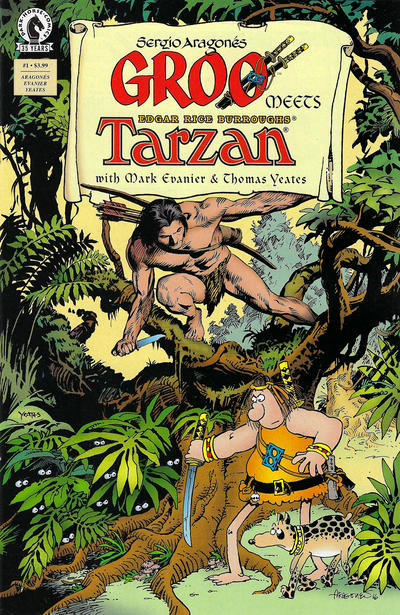 In the debut issue we are treated to a trio of narratives which will run alongside one another for most of the series save when a few of them intersect. The first narrative is set in the modern world and features Sergio Aragones and Mark Evanier at Comic-Con. Sergio wants to do a crossover between Tarzan and Groo and Evanier is reluctant. There are the usual gags about fanboy behavior at Comic-Con and even a few cameos from the likes of Magnor and Rainbow. Them we meet Tarzan who is troubled by slavers who are in his territory practicing their vile industry. This part of the tale has a deadly serious to it and I worried at first if the differences in tone were going to cohere. The third narrative follows Groo and his constant companion Rufferto as they are literally eating their way from village to village and creating panic as food reserves are depleted. Meanwhile Sergio and Mark go to the Chula Vista Jungle Safari Land, a park of ill repute where Sergio is overcome with his reseach for the proposed Tarzan book and gets lost in the park. 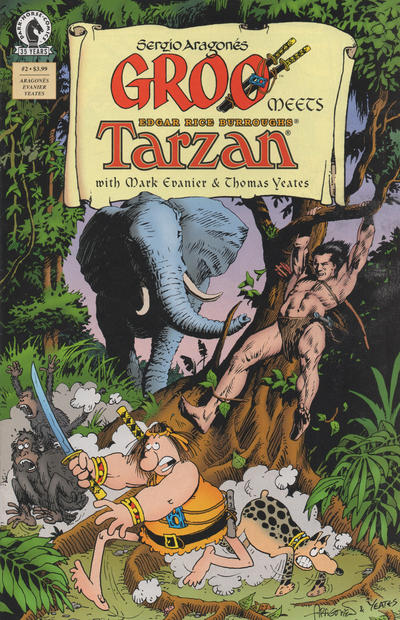 As the narratives continue, Sergio tries to survive in the park as his hero Tarzan might've done. Tarzan for his part is still scheming an effective way to counter the slavers who are immense in number. And the villagers in Groo's world hatch a plan to send him into a mysterious mountain pass from which no one has ever returned. While Sergio goes feral, and Mark goes back to the Convention, Groo finds himself in the world of Tarzan, a landscape that bewilders him more than usual. 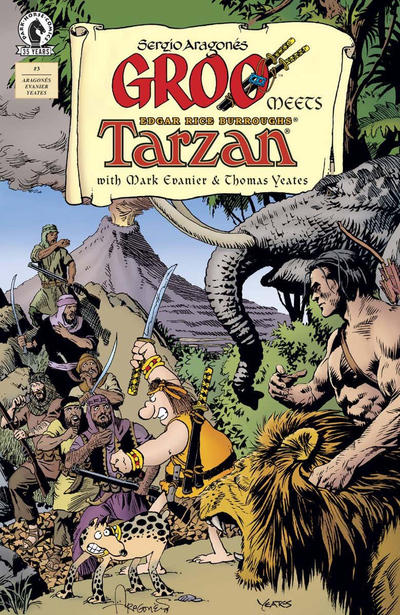 Sergio's troubles continue and Mark eventually grows concerned enough to go back to look for him (after his many panels have been conducted). Amazingly Tarzan and Groo meet and then work together (more or less) to battle the slavers. Tarzan says he needs an army to defeat the slavers totally and Groo says he knows where to get one. Mark heads back to the safari park with a woman from California Animal Rights and Environmental Rescue to find Sergio. Sergio's phone has been swallowed by a hippo by the way. Tarzan goes to warn natives of the threat of the slavers and Groo heads back to his land to find help. In the rousing finale Groo successfully gets help from villagers too afraid of him and his appetite to say no, while Tarzan uses disguise to mislead the slavers for a time. Sergio's woes in the park continue as he joins an employee and impersonates a crocodile. Groo surprisingly is successful in getting his army back to Tarzan's world and the offbeat looking warriors prove effective in the battle. It's also a delightful artistic endeavor as the two styles are blended quite effectively. The search for Sergio intensifies when nearly all of Comic-Comes to the safari park to help rescue him, which they do. Groo leads his villagers back to Groo-world through the cavern passes while the slavers escape Tarzan and follow. The villagers get home as does Groo but the slavers end up in the exceedingly dangerous world of Pal-Ul-Don where they are set upon by hungry dinosaurs -- a fitting end. The pass to Groo-world is cut off for all time (for now) and Tarzan heads home, thankful for the help...he thinks.
SPOILERS ENDETH!
This volume also contains some one-page Rufferto gags as well as all the original covers (see above) for the series. This one was even more fun than I expected. Groo was more effective than I expected, though most of that was dumb luck. The artwork though is the main reason to seek this one out. Yeates as always draws a realistic but compelling Tarzan and Sergio Aragones is a force of nature filling pages with details that will delight for days. And many of Evanier's jokes were funny too.
Rip Off
Posted by Rip Jagger at 12:00 AM
Labels: Dark Horse Comics, Mark Evanier, Sergio Aragones, Tarzan of the Apes, Tom Yeates