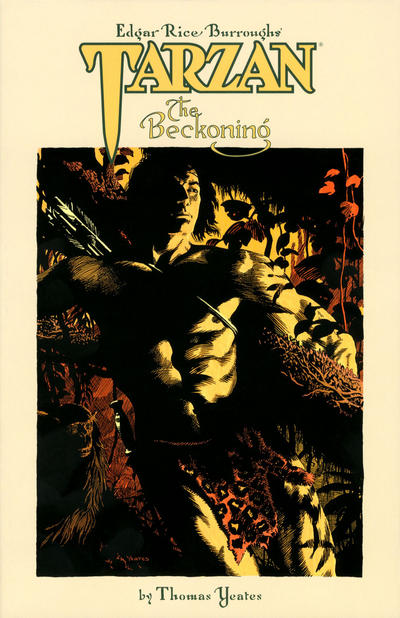 Back in those halcyon days of the "Hot" 90's when superheroes were popping up in comic bookstores like so many mushrooms, tasty but alas very much alike, there came the occasional different kind of comic book experience. And from Malibu by way of Sweden came some very different takes on Tarzan of the Apes. Sadly in America ERB's Ape Man is perceived too much through the movie camera lens and much of the background depth of the myriad world's Burroughs created are lost. In Tarzan - The Beckoning by artist and writer Tom Yeates with assist from Danish writer and editor Henning Kure, we get a story about Tarzan that challenges both expectations about the Ape Man and his lovely bride Jane. 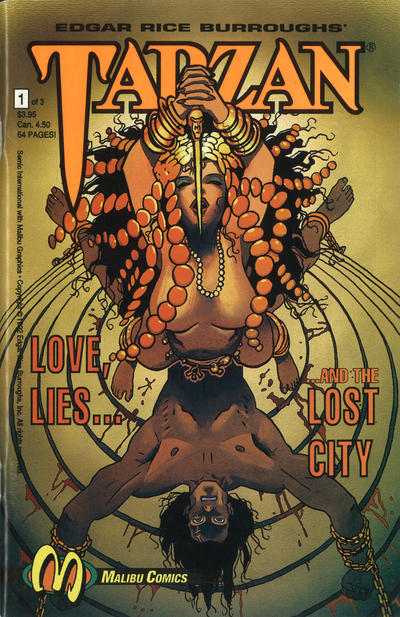 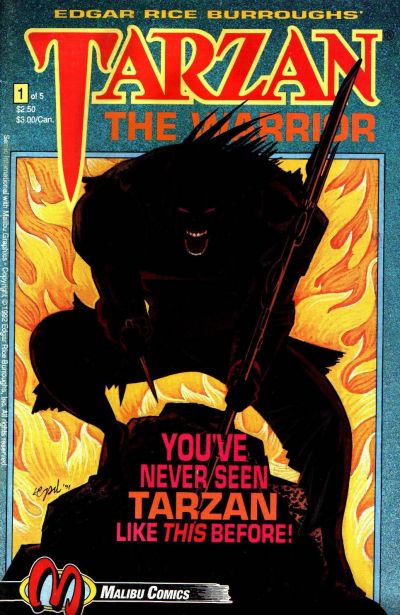 This series was first published by Malibu Comics, made famous as the launching platform for Image Comics. In collaboration with the Danes, Malibu brought out several fascinating Tarzan stories, all rich with mythology and fresh exciting takes on the classic Jungle Lord. There was a trilogy by Henning Kure and Peter Snejbjerg called Tarzan - Love, Lies and the Lost City and another by Marc Hempel and Neil Vokes called Tarzan the Warrior. The third and most impressive was Tarzan - The Beckoning which ran a lusty seven issues, all seven of which were gathered up by Dark Horse some years ago. The others deserve a new audience as well. 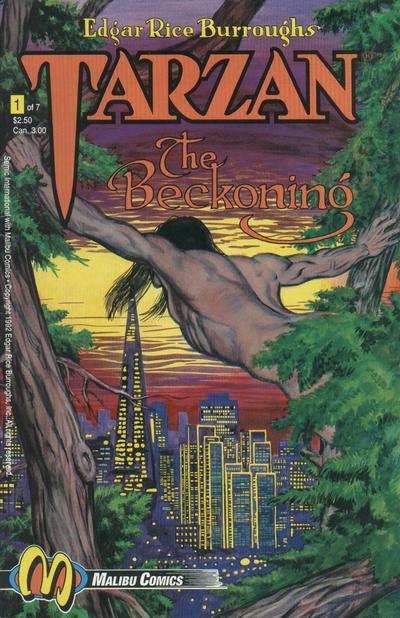 The story begins with Tarzan and Jane in San Francisco where they are living comfortably very long lives. Tarzan is at least one hundred years old and still vital, and we learn why before this story is over. Jane too is still young as well. The two are fighting to end the ivory trade which is exterminating the elephants of Africa. Tarzan for his part fights the fight with his usual direct methods. But he is hampered in his struggle by strange dreams which cause him to revert to his most savage nature. 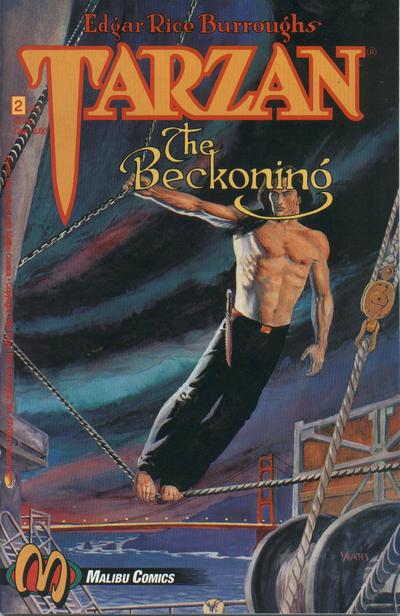 The powers that be decide that Tarzan must die after he destroys a particularly rich shipment of ivory. For him these tusks are parts of his friends and he'd rather see them burned and sunk to the bottom of the sea than sold. He is targeted by foes both old and new, foes who don't really know the true nature of the man they are targeting. He leaves Jane in California and heads to Africa but in a brutal sequence his plane is shot down with all its many passengers. This series as full of fantasy elements as it is still has a shocking realism to it thanks to Yeates remarkable art. He draws figures which feel real. Needless to say Tarzan survives the savage attack. In classic ERB tradition he washes up on the shore near his old cabin in which he was born. We get bits and pieces of his "origin" as the series proceeds. 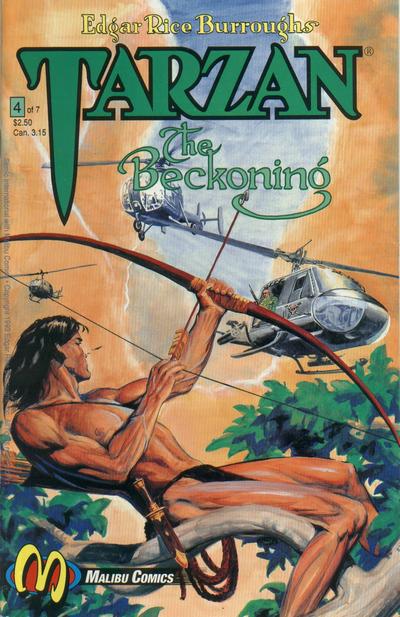 His enemies, thinking they have killed him seek to end the threat of the Waziri who also fight to save the elephants. Tarzan is key to turning back a savage helicopter raid the fabulous Waziri village. Death is meted out on all sides as the primitive struggles against the weapons of the modern deadly world. 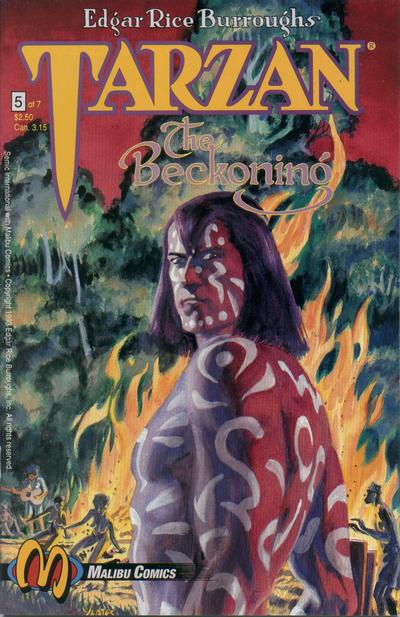 But there is still the mystery of Tarzan's dreams and we discover that the same man who give Tarzan his long life now is invading his dreams. That man, called Loc the Trickster, has also taken Jane captive when she came to Africa hearing of Tarzan's seeming demise but hoping for the best. Loc needs Jane to get him into a strange valley where the secret of long life resides. Again in classic ERB style Jane has lost her memory. 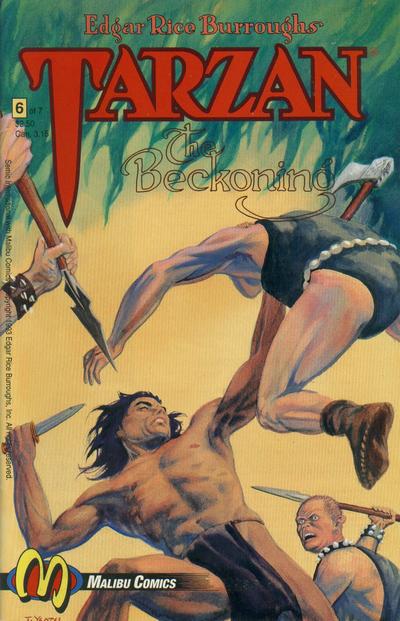 Followed by the aged son of an old enemy Tarzan does to the ancient valley and battles savages there who descend from Atlantis. The culture he seeks is older still and dedicated to peace. Jane for her part escapes her captor and survives thanks to her instincts and training and while still not knowing her name becomes a savage jungle woman of the most attractive variety. Yeates is at his best when he renders Jane, she's exceedingly sexy but still very much a realistic if somewhat idealized woman. 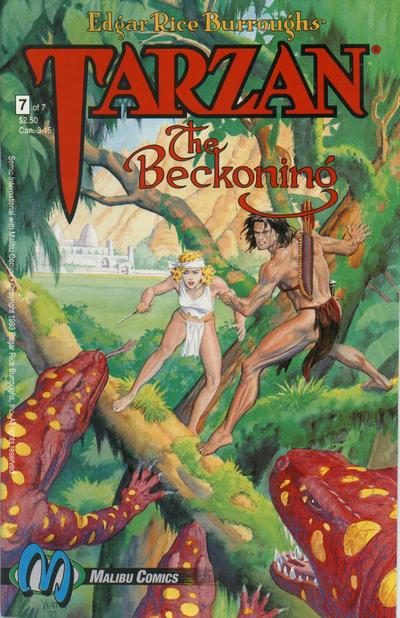 Without give too much away the saga concludes in typical ERB form with a somewhat happy ending for most. For those who like the literary Tarzan this series is a real treat, both modern but still evoking those classic ERB themes. Tom Yeates draws a Tarzan I can relate to. He's idealized but somehow of still human proportions --he feels real. The dreams in this storyline are rendered in a looser style and that makes the story telling much clearer than it might've been under less capable hands. Over a hundred years ago ERB created his idealized noble savage in an Africa mostly myth and countless lost civilizations. But in an Africa which is much better known, there is still room for magic and monsters, and most importantly there is still room for Tarzan.
Rip Off
Posted by Rip Jagger at 12:00 AM
Labels: Dark Horse Comics, Malibu Comics, Tarzan of the Apes, Tom Yeates