Hogarth's Tarzan Of The Apes! When the great Hal Foster elected to leave the successful Tarzan of the Apes comic strip and create Prince Valiant he left a big hole for an artist to fill. Burne Hogarth filled it in spades. He drew the adventures of the Ape Man for over a decade in two shifts. Eventually he left the strip and struck out on successful ventures such as his school and his many books about anatomy. He was a celebrated comic artist, especially in Europe where his lush baroque images seemed especially appreciated. Then in the 70's Hogarth was brought back to the great creation of Edgar Rice Burroughs to fashion to graphic albums. The first I will look at today the second I will review next wee. 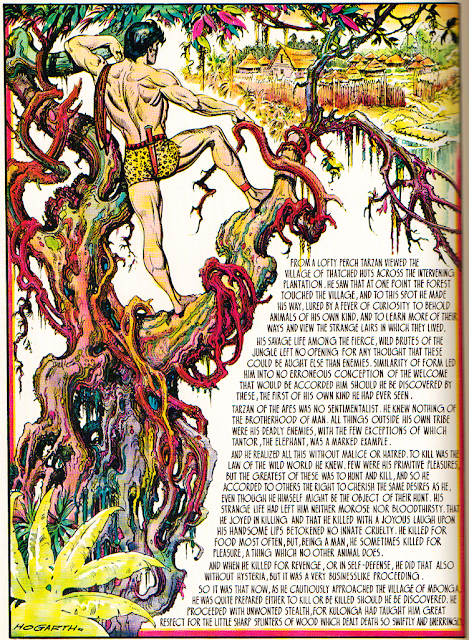 Edgar Rice Burroughs' Tarzan of the Apes was published in 1972. For this large volume Hogarth set about to do nothing less than adapt the first influential ERB tale of Tarzan. And he created this artwork in radiant colors. In this all too familiar tale we meet the Lord and Lady Greystoke aboard the Fuwalda where their lives are saved after a savage mutiny by a grateful sailor named Black Michael. They are put off the ship onto the African coast where they eke out a survival of sorts and Lady Greystoke gives birth. A year later she dies. Then the apes led by the savage Kerchak attack killing Tarzan's human father and a she-ape named Kala takes the babe into her arms, so recently bereft by the loss of her own baby, and she raises young Tarzan as her own. We follow his early years as a naked youth who lives the life of a great ape though he slowly begins to realize he is not like his peers. He discovers his father's cabin and uses the books there to begin his journey to some semblance of civilization. The death of his mother Kala brings him into contact with humans in a most brutal way and he slowly but surely rises out of his grief to use his wits and tools to kill Kerchak and become King of the Apes. And that's where Hogarth leaves it. 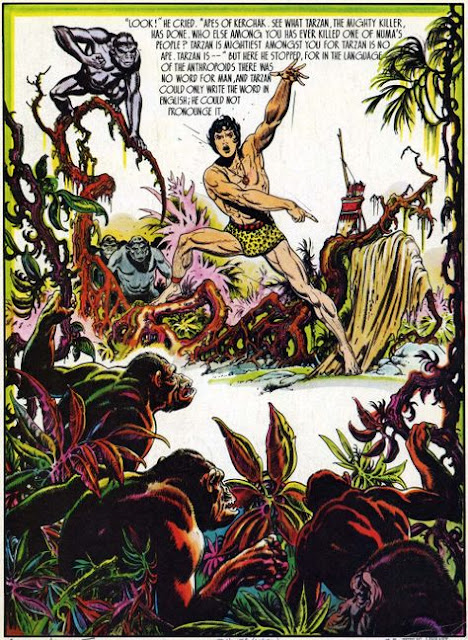 We get no mention of Jane Porter, nor will we meet D'Arnot or any of the the other influential humans who soon come into Tarzan's life and bring him into the larger world. Hogarth is limited by space to tell the story of young Tarzan with lush and beautiful pictures. Hogarth's Tarzan is an idealized man, beautful in the extreme and as ERB intended suggesting that the Ape Man is the apogee of what a human being can become if unfettered by the cares and woes of modern life. Tarzan is a human being returned to the wild, but not a life which is brutal nasty and short, but one which allows him to rise beyond the limits of normal men. 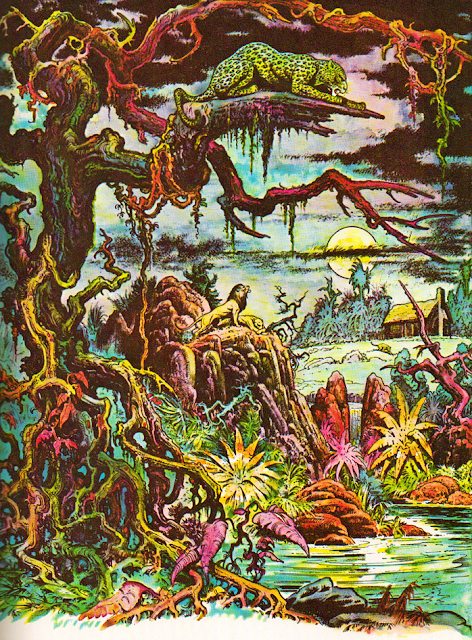 I am not completely impressed with the reproductions here by Dark Horse in the reprint edition in which I read the story. The art is still mighty impressive but at times appears muddy. The colors are nigh iridescent, but I wish they'd pop just a bit more. The blend of text, taken from ERB's original novel and adapted by Hogarth and Robert Hodes sweeps the reader along at a breakneck pace and frankly I had to remind myself to slow down and savor the pages. But as good as this adaptation of the Tarzan lore is, it's not Hogarth's best. He will do his best work on Tarzan in his follow-up to this volume, but more on that next week. 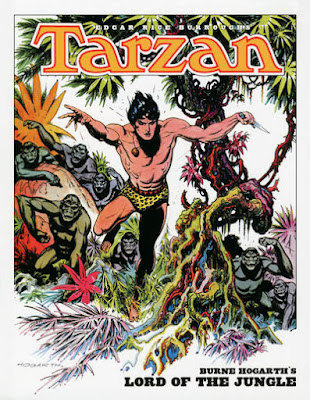 Rip Off
Posted by Rip Jagger at 12:00 AM
Labels: Burne Hogarth, Edgar Rice Burroughs, Tarzan of the Apes