The Best Of Berni! 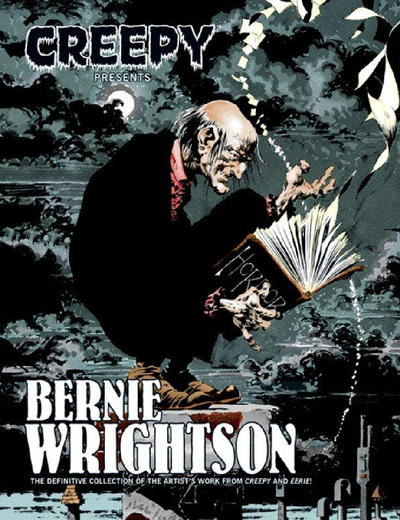 Berni Wrightson was the ideal artist to work for Warren Publishing's like of black and white horror magazines Creepy and Eerie. He such a perfect choice that it is surprising how little work he did for the company. Some years ago Dark Horse put together the Wrightson stories and art from both Creepy and Eerie in a highly readable single tome from a decade ago. 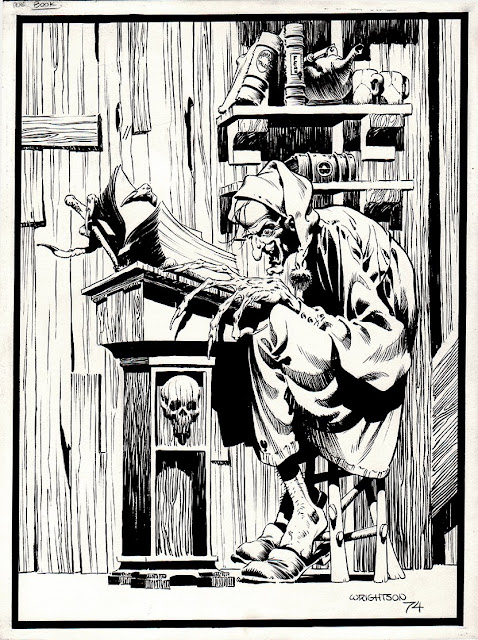 The book begins with the work for Creepy and what is arguably Wrightson's comic art masterpiece "The Black Cat". He is credited with both the story and art and his gothic style is ideal to bring Poe to the comic page. This is followed  by a trio of stories written by Bruce Jones. The first is "Jenifer", a story of love and revulsion which is the very essence of weird. "Clarice" is a poem of sorts though no less horrific. "Country Pie" is a story that Wrightson inked over Carmine Infantino and gives a glimpse of serial killers of a different stripe. Bill DuBay wrote "Dick Swift and his Electric Power Ring", a heart-warming story in the Twilight Zone mode. This story also features the combo of Wrightson inking Infantino. Nicola Cuti wrote "A Martian Saga" for Wrightson, giving the artist the chance to put his stamp on the "Red Planet". Bruce Jones is back for "The Laughing Man", a story of the remote jungle and one greedy man's strange and lurid encounter with a hidden race of man-apes. 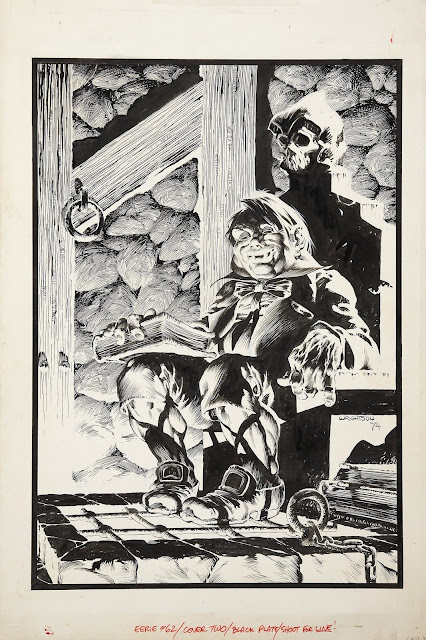 Slipping over into a section dedicated to Wrightson's work for Eerie, we find first up a nifty and exceedingly well-drawn and well-written story entitled "The Pepper Lake Monster".  Bill DuBay is back with a nightmarish take on Little Nemo in a story titled "Nightfall", but this young Nemo is assaulted by nightmares rendered lovingly by Berni. The classic "Cool Air" gives Wrightson the chance to write and drawn a classic adaptation of unquestionably Lovecraft's most chilling story of horror. On a strange note Budd Lewis wrote "Reuben Youngblood: Private Eye" with pencils by Howard Chaykin. Wrightson inks this yarn about a pre-WWII gumshoe who runs afoul of German blood smugglers aboard a zeppelin. The story section of the volume concludes with a rare color story titled "The Muck Monster" by Wrightson, one he both wrote and illustrated which offers a startlingly different take on the classic Frankenstein monster-creation yarn. 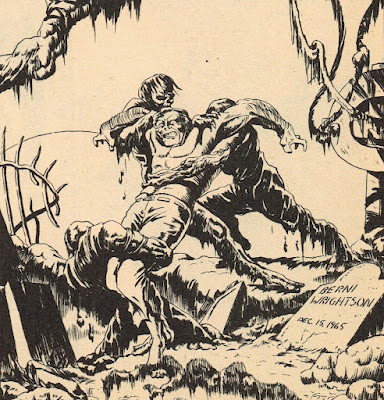 The final section of the book features some of Bern Wrightson's most alluring and repulsive artwork for Warren, the delightfully sarcastic frontispieces featuring both Uncle Creepy and Cousin Eerie as they introduce that issue's goodies. Wrighton's wonderful ability to blend horror and comedy is perfect for this task. We're also treated to the few covers that Wrightson did for Warren as well as getting a glimpse of the youthful fanboy Berni's contribution to Creepy #9 from 1966, years before Wrightson's debut as a pro in Creepy #62 with "The Black Cat" in 1974.
All the stuff in this volume is above average and most of it, the stuff done by Wrightson on his own is simply magnificent. Tomorrow we see more of Berni's take on Frankenstein.
Rip Off
Posted by Rip Jagger at 12:00 AM