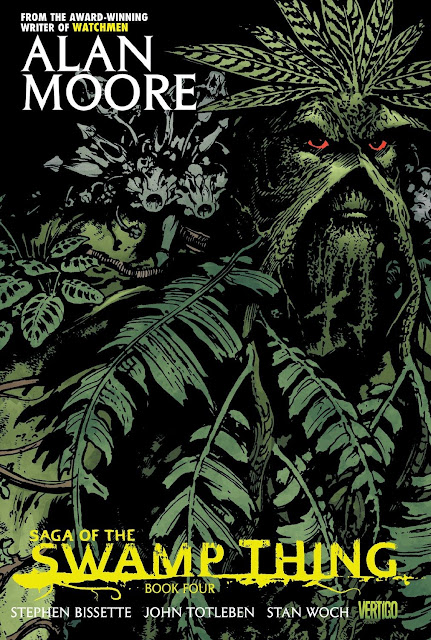 In this fourth volume of Saga of the Swamp Thing the grand scheme that Swamp Thing has been battling with the guidance of John Constantine comes to a vigorous climax. Also the Swamp Thing does his bit in the sprawling universe altering event known as Crisis on Infinite Earths. That's the cosmic stuff but on the home front Abigail must confront a threat of another kind. 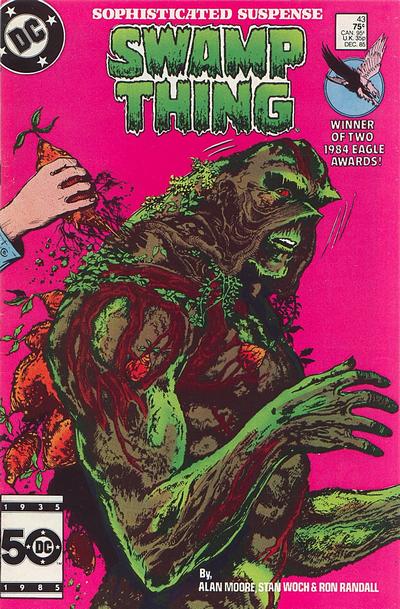 With artwork by Stan Woch and Ron Randall, Alan Moore fabricates a very curious story in which some of Swamp Thing's "fruit" is discovered by a hippie drug dealer named Chester Williams. He's reluctant to bite into this unknown tuber but a woman who is dying and an addict who is less scrupulous are not. The effects of their tasting this "forbidden fruit" are quite different and quire remarkable. 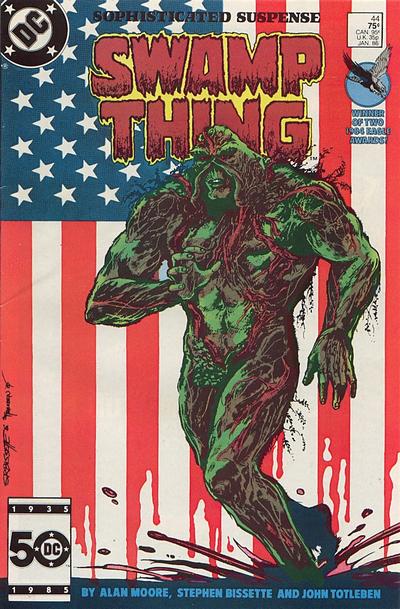 Swamp Thing must battle the "Bogey Man", a serial killer who imagines himself to be part of some grand mythic pantheon of night dwellers. We see much of his story though the killer's eyes and we are there when the scales fall from them and he must confront the truth of what he truly is. This issue is all about ghosts, particularly ghosts who have been killed in some or other by a particular type of rifle. In the sprawling abandoned house of the family who manufactured the weapons, two couples find themselves up against threats they could hardly imagine. Not all of them survive and those who do have Swamp Thing to thank, though they hardly see it that way. 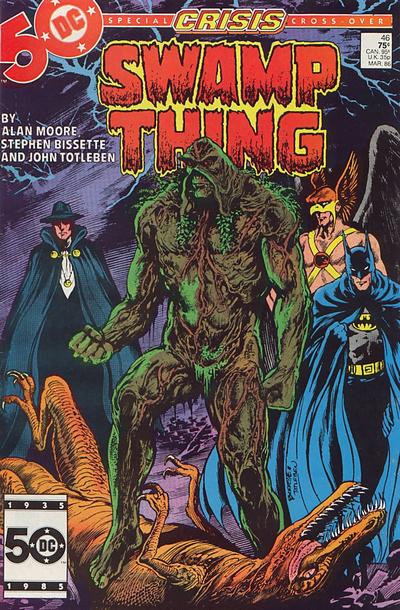 The forty-sixth issue finds Swamp Thing along with John Constantine aboard the Monitor's orbiting spaceship along with just about every other DC hero of the era. We get a view of this grand assembly from Swampy's point of view as he is not actually quite sure why is there. Nonetheless he does his bit to battle against time lost creatures and save time lost people. He also learns for the first time from Constantine of the "Brujeria", a South American all-male death cult who have been the cause of many of the menaces Swamp Thing has struggled against in his time since learning of his true nature. 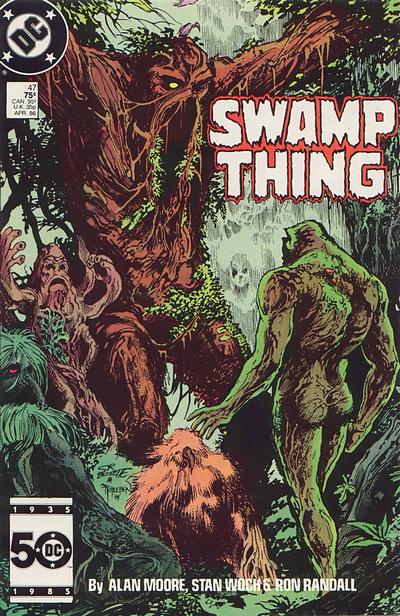 The forty-seventh issue of Swamp Thing is easily the best in this volume. It's the totally awesome first encounter by Swamp Thing with his wooden kin the "Parliament of Trees". Located in the lushness of the Amazon all the "swamp things" which have been are assembled in a grove. They have mostly lost the power of movement and most have lost the ability to communicate in any manner one would describe as traditional. They have taken root among their peers and simply are. Their fundamental notions about the world at large and their extreme long view come in handy later for Swamp Thing who is properly in awe of what they are and what he will become. Among this group is Alex Olsen from the original Swamp Thing story in The House of Secrets. Also recognizably on hand is The Heap and if you  squint just right you might be able to see Man-Thing as well. On the downside of things the romance between Swampy and Abigail has been photographed and that will prove traumatic for her. Stan Woch and Ron Randall handle the art. 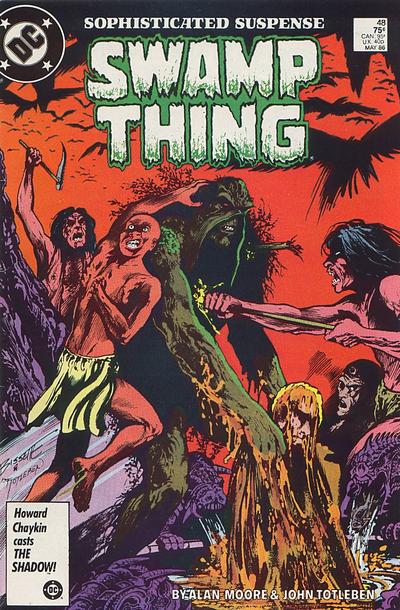 Swamp Thing is in full command of his powers when he and Constantine and what remains of Constantine's team strike at the Brujeria. Things do not go as planned when a traitor is revealed and despite Swamp Things potent talents the threat which has so concerned Constantine is about to be summoned. This is an issue drawn  completely by John Totleben and it's lush, though truth told it's a very hard story to tell visually for any artist. Abigail is arrested. 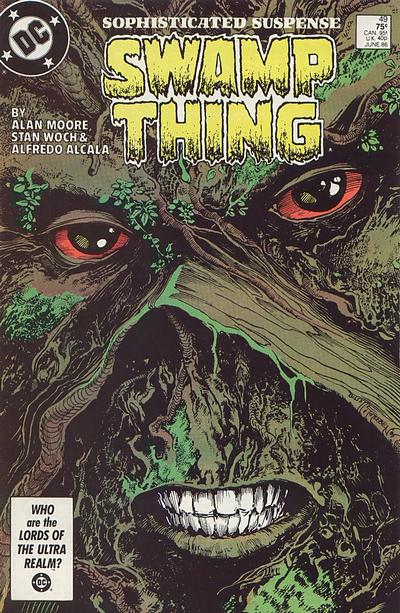 With the menace on the way, Constantine assembles a team of mystics such as Sargon, Zatara, Zatanna, Dr.Occult, as well as former Doom Patrol sidekick Mento  to confront the enemy on this side of things while Swamp Thing is joined by Deadman, Phantom Stranger, the Demon and possibly the Spectre to fight on the frontlines with other assorted magical beings. It's quite a muster to face against a threat which is still little understood or frankly understandable. Stan Woch is back and joined by Alfredo Alcala on the artwork. 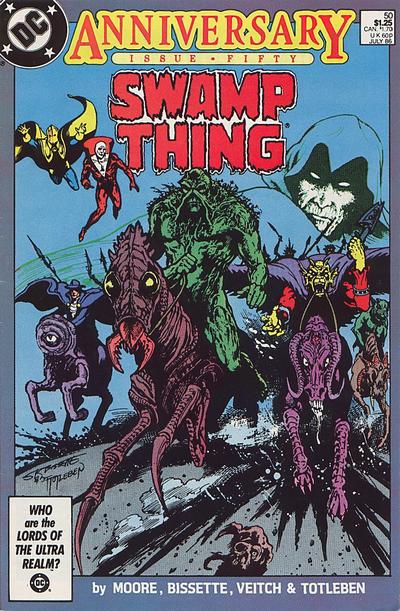 Stephen Bissette is back with partner Totleben and newcomer Rick Veitch to wind up this long Swamp Thing saga. This is Bissette's farewell to the character and as much as I want to thoroughly enjoy this wild and action-filled finale it's difficult because the inchoate nature of the threat makes the visuals hard. The assembled heroes and otherwise are up against darkness, a darkness which is reluctant to be seen in its entirety until the very end. It's hard to draw that which cannot be seen. The battles are rough and tumble and some vintage DC favorites don't survive. It will some as no surprise that Swamp Thing's journey has prepared him to perhaps save the day, if such a thing is possible. Cain and Abel show up to add a little light-hearted mayhem to the darkness. And that's a wrap on a saga which guess has been dubbed "American Gothic" save for a one more issue in the next volume that winds it all down. There's no time for Abigail's troubles this issue but she will be front and center next time.
Rip Off
Posted by Rip Jagger at 12:00 AM