Swamp Classics - Night Of The Bat! 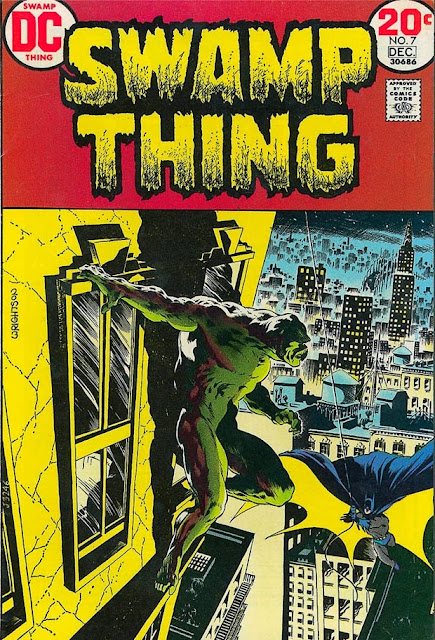 The seventh issue of Swamp Thing brings to a head the story of the Conclave which has been simmering since the very first installment. And there's Batman to boot.

Swamp Thing arrives in Gotham, the infamous bugged do in tow. He tries to find some clothes so he can blend into the large population but is spotted and an alert goes out across the city for a monster and his dog. Bruce Wayne meanwhile is finishing up some charity work alongside Nathan Ellery a plump man who seems oddly familiar. Wayne then takes his leave, gets into costume and strikes out on patrol as the Batman. Batman it seems is on the trail of the mysterious Conclave which appears to be centered in Gotham City. He confronts some smugglers but gets little information before being summoned by Commissioner Gordon with the famous bat signal. Then we follow Nathan Ellery as he slinks into his limo and gives attention to a most familiar pet, a weird ape. Ellery is Mister E of the Conclave. He goes to a warehouse where Matt Cable and Abigail Arcane are being interrogated and tortured. Gordon meanwhile puts Batman on the trail of the Swamp Thing who is using his own detective skills to try and find the Conclave's hideout. Mister E then uses the electronics in the dog's head to summon the beast who runs away, leading Swamp Thing to the hideout where he finds Matt and Abigail. Batman meanwhile finds the hideout too, just in time to confront Swamp Thing and the two have some obligatory fisticuffs which oddly ends up in Batman's defeat. While Swamp Thing climbs up the skyscraper from the outside using his immense strength, Batman recovers and heads upstairs where both arrive to at the penthouse of Nathan Ellery. Ellery who is now discovered as a criminal mastermind panics shoots the dog which has unmasked him, and his weird pet bites him. The confusion and pain cause both to fall to their deaths from the balcony. While Swamp Thing disappears Batman decides he will stop hunting him. 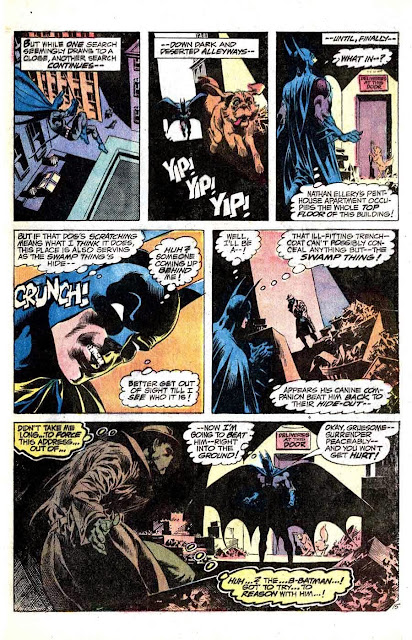 This is a rockem' sockem' issue with lots of great action as the story of the Conclave at last concludes over a year after it began. At lot happens in this issue and there's little time for full resolutions but we do see the demise of the dog, one of the stranger regular characters in comics history. Mister E's identity was sufficiently satisfying and his death even more so. Why he had an ape is never addressed, but it clearly evoked the relationship between a witch and his familiar or an evil leader like Blofeld of the James Bond movies.

Batman fans might be bothered by this issue as Bats really doesn't do much. He's oblivious to the villain in his town, he gets beaten and kayoed by the Swamp Thing and arrives almost too late at the finale and actually has little if anything to do with the baddie's demise. But I will say, thanks to Berni Wrightson's moody artwork Bats looks great throughout the story.

One can safely assume the next installment of Swamp Thing will move the character beyond the plot lines developed since the debut. He has avenged his wife as much as he can and finally returned to the United States, if not the swamps. The true blue odyssey of the first half dozen issues reaches a nifty conclusion here, but doubtless there are more peripatetic adventures to come.