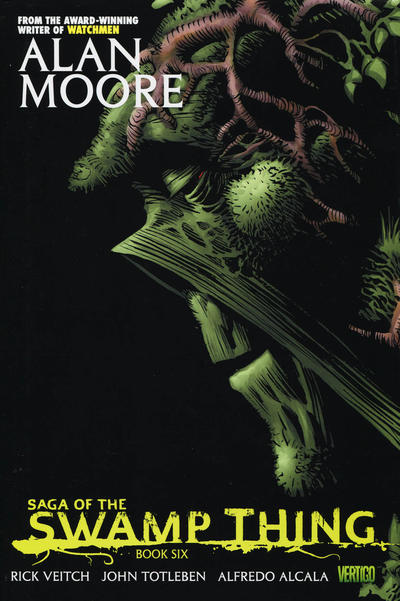 In the sixth and final volume of Saga of the Swamp Thing as written by Alan Moore things really get wild. As the saga begins Abigail has been rescued from her legal problems and allowed to go home, but it's a home without Swamp Thing who was seemingly killed in the war with Gotham City. Actually he'd been disconnected from Earth but found a somewhat safe haven in the depths of space on a blue world, a world of isolation which proved eventually not to sufficiently satisfactory and so he took a gamble and sent his essence off into space once again. 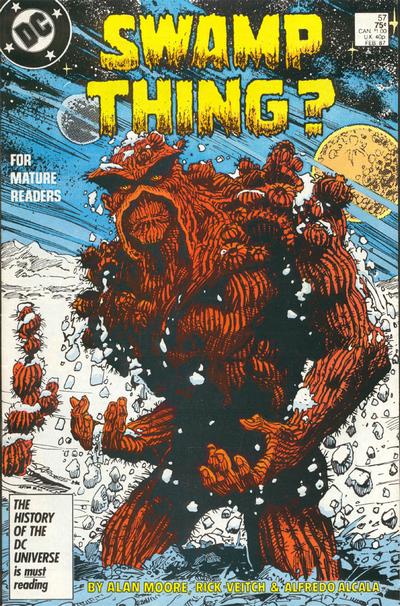 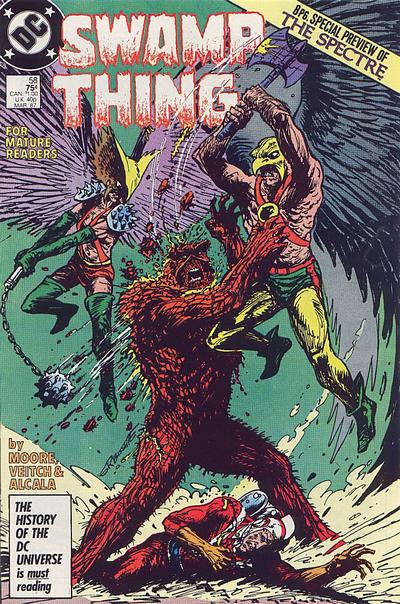 Where he landed was Rann, the very same Rann so often visited by Adam Strange by means of the Zeta Beam during the Silver Age of comics in the pages of Mysteries in Space. In this two-part tale by the team of Moore and new regular art duo Rick Veitch and Alfredo Alcala we meet Adam Strange once again as he gets to Rann only to find a "monster" to fight as he so often did in the form of Swamp Thing (now red as per the sparse vegetation of Rann). Also on hand are two Hawk soldiers from Thanagar who are negotiating with Rann for technology to help with their scarcity issues in exhanged for Zeta Beam tech. Turns out not everyone has pure motives and before long Swampy and Strange are battling the Hawks for their very survival. Moore plays around with language in these issues also giving the reader the language of Rann untranslated which seemed somewhat daft to me. 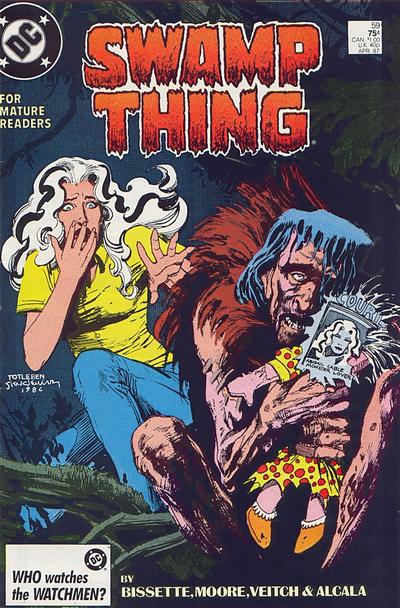 The next issue is a real change of pace with Stephen Bissette returning to write the story which reintroduces the Patchwork Man from the original Wein and Wrightson run on the series so long before. He's Abigail's father as we learned in that story and now his memories of her have resurfaced to some degree. His body is deteriorating but his reunion with his daughter is touching for them and for the reader as well. 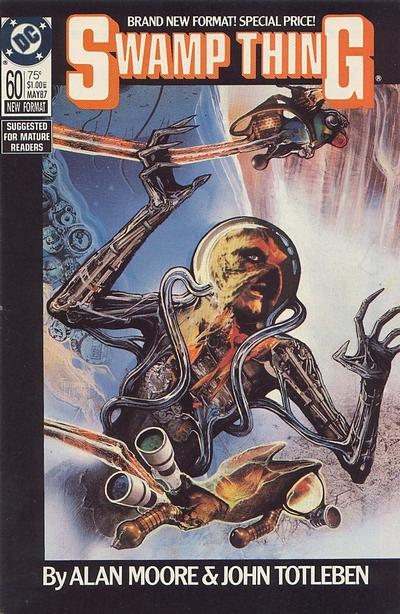 I'm going to say up front that I did not much like Swamp Thing #60 but I did appreciate the experimentation. I just don't think it worked very well. The art on this one was done by John Totleben and he used collage and other such techniques to try to illustrate an alien technological world and being, one which the Swamp Thing comes into contact with on his peripatetic journey across deep space. I frankly read this one twice and I just couldn't make it out. Not helpful was Moore's text which was over wrought and seemed written more for sound than sense, very poetical but to my eyes at least rather obscure. 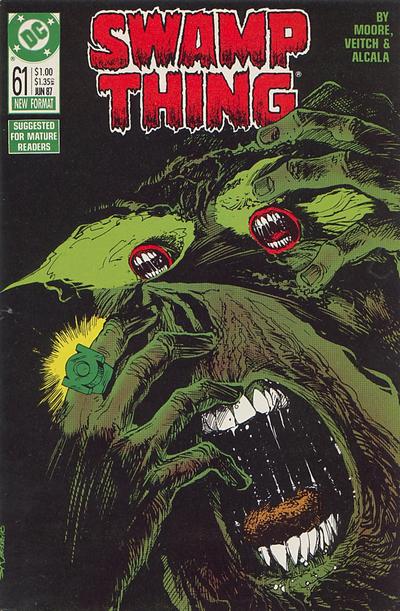 Much more to my liking was the next issue which had the Swamp Thing land on a world of sentient vegetation, so that when he tried to infuse his intellect into it he was in fact displacing and abusing the people of the world referred to only as "J586". I assume that's the designation for the Green Lanterns as this world is lucky enough to have one who helps eventually to separate Swamp Thing from the sundry folks he has possessed. That possession is not without consequence to some of the inhabitants as for a short time they shared a consciousness and that sharing resulted in too much information for some. 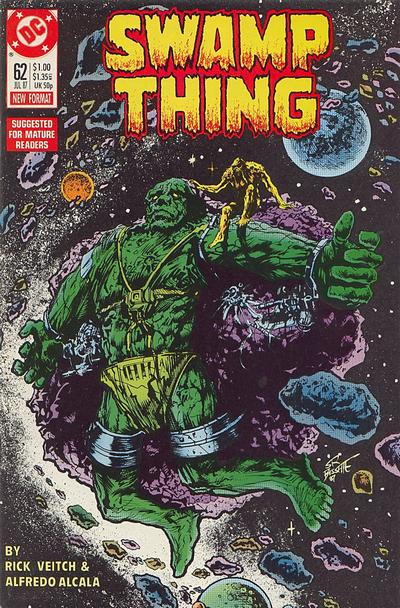 Rick Veitch takes a stab at writing as he and his inker Alfredo Alcala work to present Swamp Thing's encounter with the New Gods, in particular Metron. It's a very trippy issue as most of them have been as the series recently. Swamp Thing works in tandem with Metron to attempt to penetrate the Source and for a time they think they have done. They are disabused of this notion by Darkseid who is interested in what motivates the Swamp Thing on this odyssey across the stars. He does learn and as usual uses that information to help his strategies for the future. Swamp Thing is allowed to continue his journey. 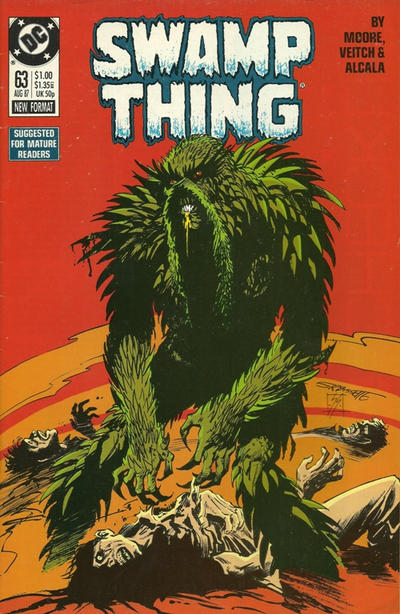 In the penultimate Alan Moore issue Swamp Thing at last comes to Earth. Chester Williams, the hippie who had turned on a few folks to the magic of the weird yams that sometimes tumbled to the ground from Swamp Thing is a mainstay in the strip now, helping Abigail get her focus back with some environmental work and in this issue meeting Liz Tremayne, still recovering from her captivity with Barclay for the first time. As we encounter old cast members, some of the men responsible for planning and attempting to execute Swamp Thing end up dead in a number of strange ways, all having to do with plants. We sense that Swampy is back even before we see him. 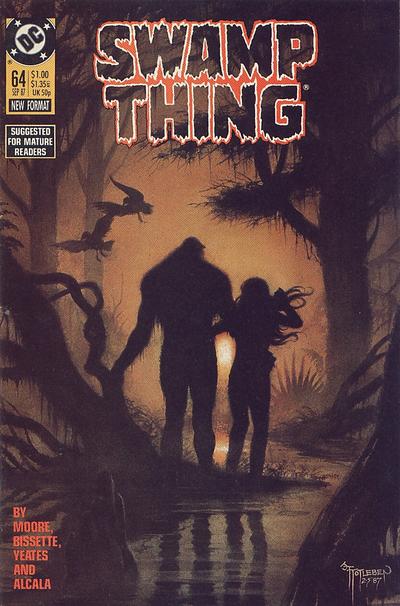 The last Moore issue is illustrated by three artists -- Tom Yeates, Rick Veitch and Stephen Bissette. Alredo Alcala binds the styles together with his lush pen. The story deals with the reunion of Abigail and Swamp Thing as they bond together in a number of ways and share what they've learned in their forced separation. Swamp Thing is debating whether to use the enormous powers he has to help stop hunger in the world at large. His answer to this dilemma is drawn from his time with Parliament of Trees and he understands that his role in the world is not to save it from itself really. All the time this is unfolding we meet a strangely familiar fellow named "La Bostrie" who is poling a canoe into the story yet takes no part in it. Moore writes himself out of Swamp Thing almost literally as Swamp Thing and Abigail are shown at peace at last. The cover by John Totleben sums up the mood of the story quite well. 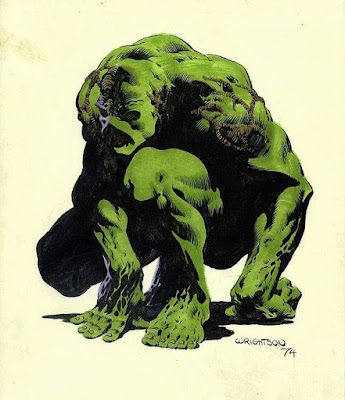 Overall these are very very weird stories and to my mind Moore and at times the artist indulge themselves at the detriment of the clarity of the storytelling. Moore's writing throughout this volume is loquacious to a fault and at times I frankly can't make out what he means. It's intended to be poetic, but it sadly becomes pedantic. More Moore is not better than less Moore when it comes to to Swamp Thing at the very least. That wraps up my look at Swamp Thing. I've read nearly a hundred Swamp Thing stories by a range of very talented folks and it's a saga I'm glad I finally undertook, if it was perhaps several decades late. It's back to Berni Wrightson and Frankenstein this week as Halloween approaches and other things that go bump in the night as well.
Rip Off
Posted by Rip Jagger at 12:00 AM