Saga Of The Swamp Thing - Book One! 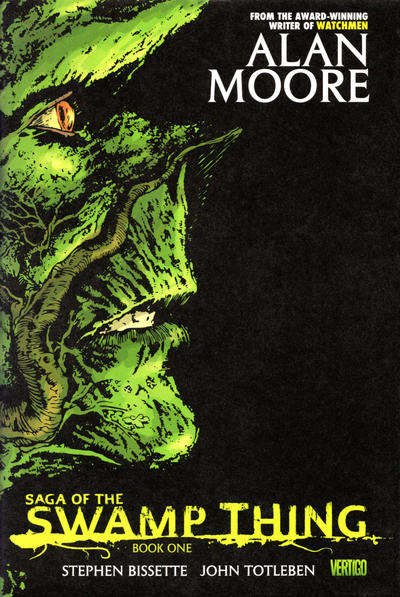 So as it turns out, the Swamp Thing stories that had been so carefully crafted by Len Wein and Berni Wrightson and Nestor Redondo and Marty Pasko and Tom Yeates and others as well were the stories of a man who had becomes a plant. The stories told by Alan Moore and Stephen Bissette and John Totleben and others are the stories of a plant who seems to want to be something of a man. No small change that. I have long read of the impact of these stories, stories which supposedly changed the nature of comic book storytelling. I guess so, maybe, but I've never read them  until now. As it turns out I rather like them. 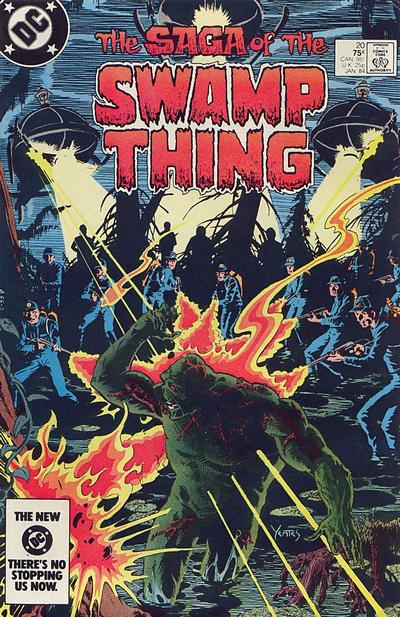 The first Alan Moore story was drawn by Dan Day and inked by John Totleben (who it turns out was a key player) and it transitions the series away from the science fiction and magic intrigue yarn that Pasko and Yeates had been spinning to a more personal internalized kind of storytelling. We have to reset our players though a bit and some of them leave the board entirely. Liz Tremayne and Dennis Barclay are removed, not to live happily ever after but to live still. The Sunderland Corporation makes its move to kill the Swamp Thing and as it turns out they succeed. 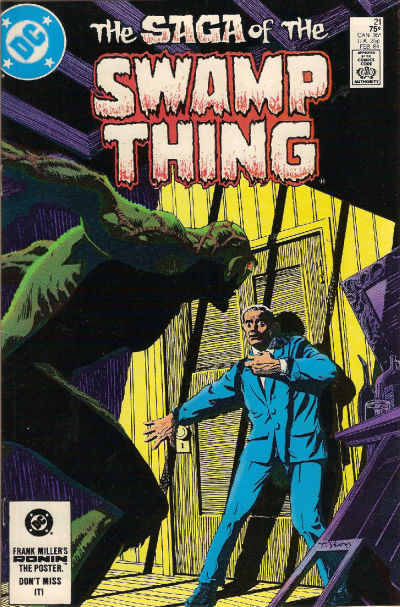 But they had not counted on the schemes of Jason Woodrue. Woodrue, better known in DC comic book circles as "The Floronic Man" is brought in by Sunderland to dissect the seemingly dead Swamp Thing but it turns out the reports of his demise were incorrect. Woodrue makes the discovery that Swamp Thing is not Alec Holland but a plant (or colony of plants rather) that wish to become Alec Holland. And since he wasn ever alive in that limited human sense, it comes as little surprise to the reader though a dreadful to General Sunderland when the Swamp Thing rises to exact his justice. 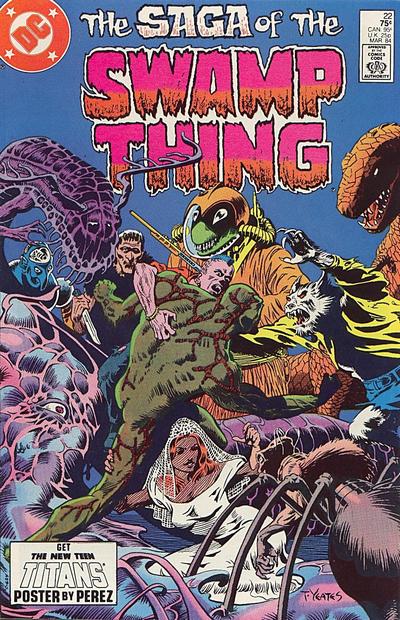 Woodrue's plans though continue as he heads to the swamps to seek his solace in the plant world. He wants to be as the Swamp Thing is, but his self-loathing as a human (at least in part) means that he wants to gain some measure of control of "The Green", the inchoate world of plants and using them shuffle off the human race from the planet Earth. Meanwhile Abigail Arcane becomes enmeshed in his schemes even as Matt Cable slips further and further from the world as we know it. 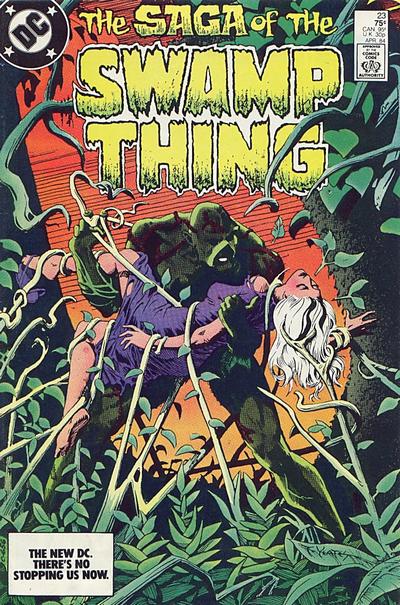 Woodrue's plan is to isolate human beings behind impermeable barriers of plants and then have those plants oversaturate the environment with oxygen, oxygen which will all readily catch flame. He wants to burn out the human race altogether. It's a dreadful scheme and only Swamp Thing is in a position to confront the villain. 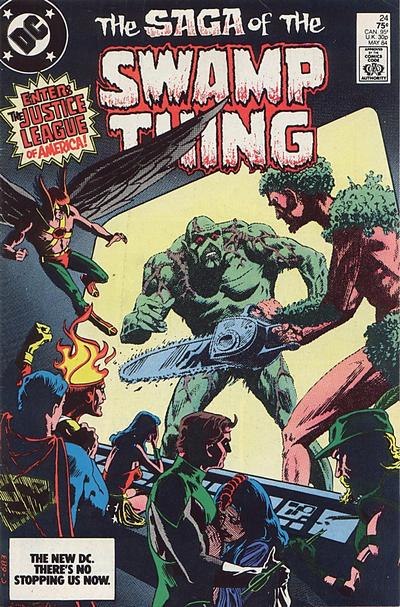 Even the stalwart Justice League is at a loss to know what to do as they watch helpless from their satellite as the world is covered and oxygenated. The analyze but are shown to be incapable of finding a successful course of action. The world is doomed until Swamp Thing reveals to Woodrue how little he knows of "The Green" after all. The story ends with Swamp Thing coming into full bloom in the understanding of his role on the planet. Tom Yeates has continued to provide covers for the series, but as elegant as his art is, it doesn't properly advertise the strangeness beneath those covers. 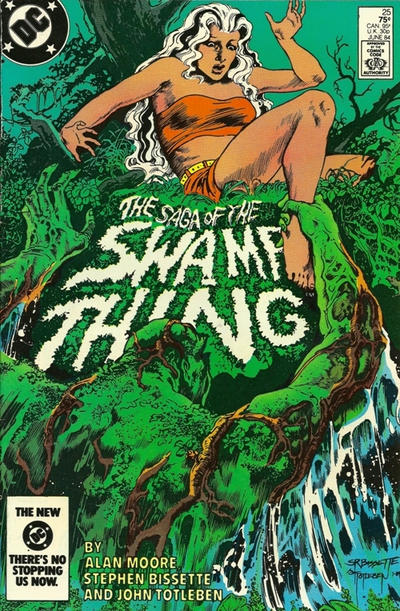 As the friendship between Abigail Arcane and Swamp Thing deepens, Matt Cable is lost utterly to demons he has little control over. He has a power which he abuses and then something changes inside him. All this and the arrival of Jason Blood, the Demon as well mark the beginning of a trio of truly terrifying tales which will involve autistic children who have peculiar insights into the dangerous world all around us. The look of the comic becomes more fluid with Bissette and Totleben handling the covers at last as Karen Berger takes over the editorial reins on the comic. 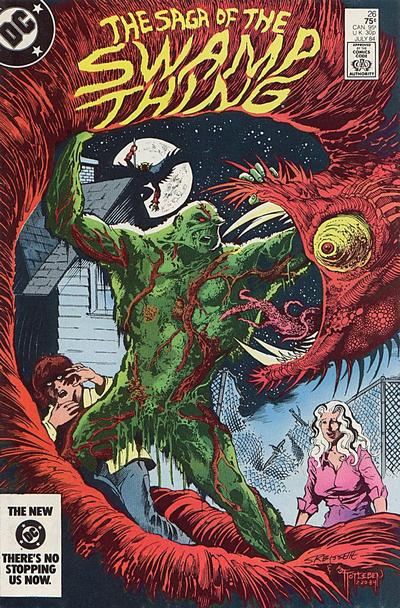 The Demon comes to fend off a monstrous "Monkey King" wo has slipped into our universe and is ravaging the lives and souls of men and women and children. The Demon who has come to fight this evil is a powerful but sour creature, a hero from Hell who spouts poetry and is all too ready to kill. Swamp Thing rises up to stand both with and against this Demon. 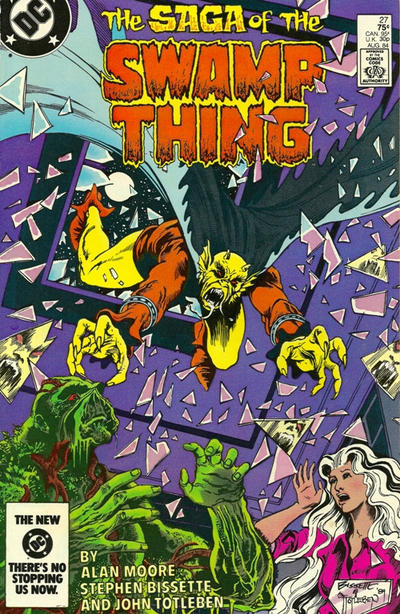 As the Demon and Swamp Thing find a way to end the threat of the Monkey King, Matt Cable loses control and after a horrific car crash becomes something utterly terrible and terrifying. The horror that Alan Moore has promised will grow even more grotesque and ugly. But that's next time. One word about the artwork by Stephen Bissette and John Totelben in these issues, it's simply magnificent. I've been a Bissette fan for many years, finding him in his post-Swamp Thing phase on his Indy comic Tyrant. His essays in sundry places about monsters and such are always ripe with information and teeming with insights. And I've learned that Totleben, an artist I'm little familiar with was very much an important player in this creation. Great stuff, potent and compelling and there is much much more to come.
Rip Off
Posted by Rip Jagger at 12:00 AM