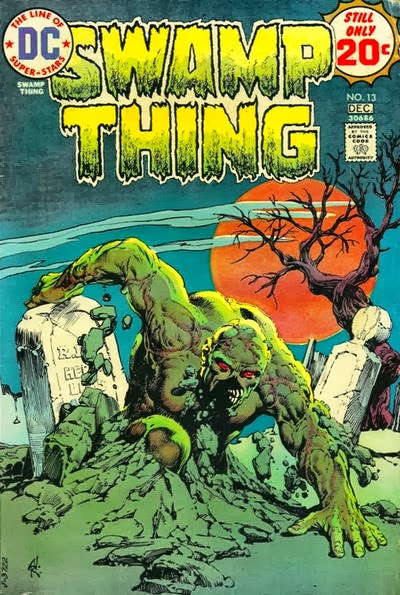 The original run of Swamp Thing rumbles along for several more issues, but in many ways the thirteenth issue of the classic comic can be seen as the last of the original concept because it marks the final one done by one of the original creators. Len Wein steps away from his Swamp Thing after writing an issue which appears to want to tidy things up, a bit anyway.

The story begins as Matt Cable, Bolt and other men glide in a power boat through the swamps looking for Swamp Thing who is at the same time battling against mutant creatures which seem to increasingly populate his native swamp. He is reflecting on these weird beasties when Cable and his crew find and subdue Swamp Thing whisking him off to Washington D.C. where Swamp Thing is imprisoned in a laboratory habitat under the scrutiny of one Professor Coolidge Degrez despite Cable's objections. Swamp Thing escapes and Degrez is killed by guards trying to stop Swamp Thing. He is recaptured under the orders of Commander John Zero who eventually gives Cable permission to try and communicate (at long last) with Swamp Thing. Cable does and eventually and painfully Swamp Thing reveals finally that he is Alec Holland and describes how he came to be the Swamp Thing. Cable and Abigail Arcane decide they will work to free the Swamp Thing but are almost stopped by Bolt, still seething with rage. Cable talks  him down and convinces ultimately to help them get the Swamp Thing out of the lab. The scene then cuts to the funeral of Professor Degrez and as the mourners leave the grave begins to rumble as Swamp Thing climbs up out of the earth. Cable had hidden him inside the coffin underneath Degrez and elude detection. Now that he is alone Swamp Thing finds his grave alongside that of his wife Linda and realizes painfully that the life he had hoped to return to is lost forever. He turns his back on Cable and Abigail and chooses instead to shamble into the swamps where he feels more at home. 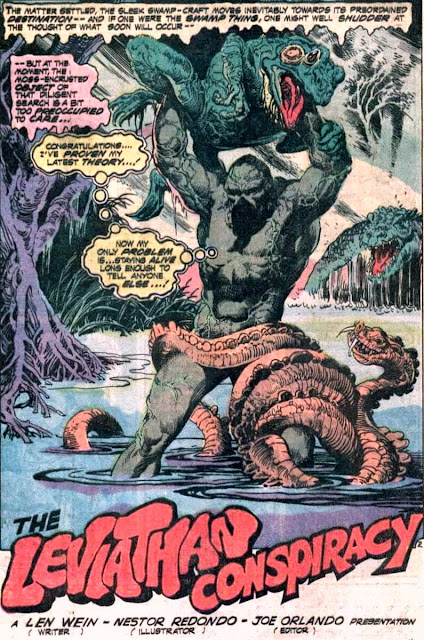 You do get the sense that Len Wein wanted to tie up some threads in this story and to some extent he does by finally having Cable learn the secret he's chased for nearly two years. The fact that Alec Holland is Swamp Thing is a secret only the reader had known, but which going forward would be an aspect of the story open to others. It does somewhat shift the tone of the story from tragedy to one of mere sympathy, though it does open plot possibilities. For one, I'm glad it happened as Cable's ongoing quest was one of the few things which fueled the preceding issues. Also the fact that for now Swamp Thing has relented and no longer seeks to return to his former life as Alec Holland likewise winds up the saga, at least in  this early stage.

This issue was a hodge-podge of details, again more of a sci-fi outing than having much to do with horror. I find the naming of the characters fun in this one with "Coolidge Degrez" and "John Zero" both suggestive, particularly since they use extreme cold to trap and control the Swamp Thing. I guess this has thematic implications, counterpointed with the vital boggy nature of Swamp Thing himself, but it feels undeveloped here at best.

I did love that the totally awesome Nestor Redondo cover image of Swamp Thing erupting from a grave was not merely symbolic, though the idea he was squished into a coffin alongside a full-grown man seems speculative at best. Some plot devices work and some fall short. This one seemed  a bit half-baked despite its decidedly horrific power.

I appreciate the final sequence with Swamp Thing shambling off into the wilderness of his swamp, the one place he spent most of the early issues returning to and which has become a haven of sorts now. It brings a reasonable closure to the saga in this first stage. 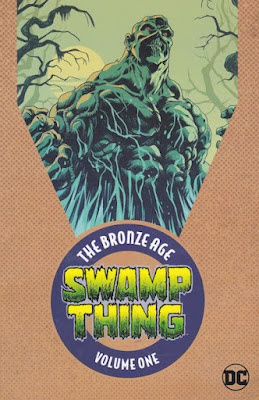