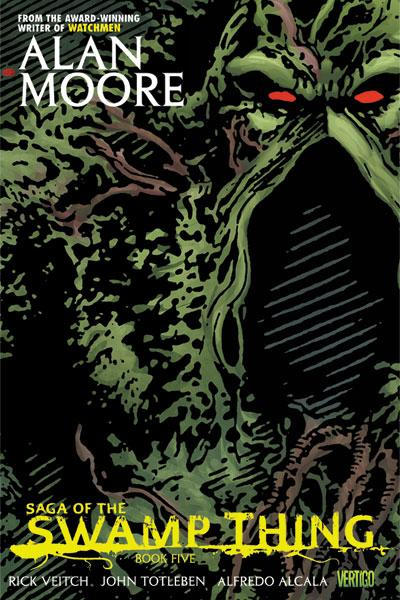 After the long war to save the world from evil designs of the Brujalia, Swamp Thing is at last free to return home to his mucky home and to the arms of Abigail. But he doesn't know that she has been drawn into much trouble because of the dimwitted notions of fools who think it is their right to protect all society from folks who are different from them. Alan Moore is gearing up for some of his most innovative and challenging stories in the series so far. For the record while he has quit doing stories for the time being, Stephen Bissette is still supplying covers for the series. 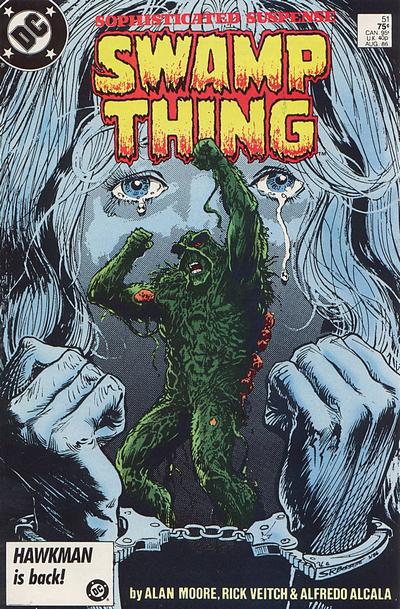 Th first issue in this volume is a transitional one in which Swamp Thing leaves behind his allies Deadman and Phantom Stranger and Constantine to return to his swamp home. Meanwhile Abby is freed on bail but she loses her job and many of those whom she had grown close to. After some reflection she jumps bail and heads to a city where she can be anonymous -- Gotham City. That plan backfires when she is innocently swept up in a police operation to curb prostitution. Her identity is learned quickly enough and she becomes even more of a perceived criminal. With Rick Veitch and Alfredo Alcala handling the art the book looks great as Swamp Thing speeds to Gotham City to free Abigail from those who hold her. He very quickly and robustly makes his demands known to the powers that be, free Abigial Arcane Cable or suffer a war with Swamp Thing. He begins his war by starting a plant uprising in the city while Lex Luthor is brought in to combat him. Also showing up is a certain Darknight Detective. 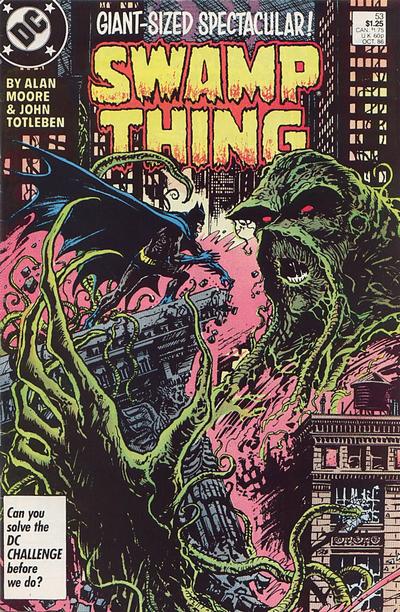 In a giant-size issue drawn by John Totleben the war between Swamp Thing and the city of Gotham rages in all sorts of weird and unexpected ways as the Swamp Thing showcases his new-found might to threaten the city as a giant and as the source of all manner of plagues. Batman tries to negotiate and battle the Swamp Thing but as Gotham becomes overwhelmed by vegetation it's clear that the city is losing. So finally Batman is able to convince the officials of Gotham that Abby's so-called crimes are anything but and she not only must be freed but should be freed. And as they celebrate her release Luthor's plan is put into effect. Swamp Thing is burned up and seems to die. 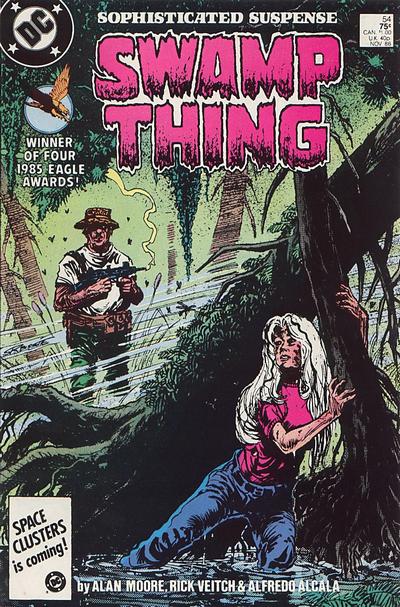 With Swamp Thing's seeming demise Abby goes home to grieve but finds Liz Tremayne on her doorstep. Veitch and Alcala are back on the art in this story which shines a light on two characters who have been missing for quite some time. It seems that Dennis Barclay has been keeping Tremayne mostly a captive, depriving her of information and slowly chiseling away at her confidence until she has become his weakened pet. Barclay finds that Liz has found the strength to escape him and takes a gun to get her back. This is a pretty tough one and while I have no trouble buying Barclay in his role as persecutor as it jibes well with his earlier presentations by Pasko, Tremayne as his victim seems a bit of a hard fit. Certainly it can happen I guess, but she seems an unlikely victim of such crime. I'm not at all sure Moore convinces me on that score. 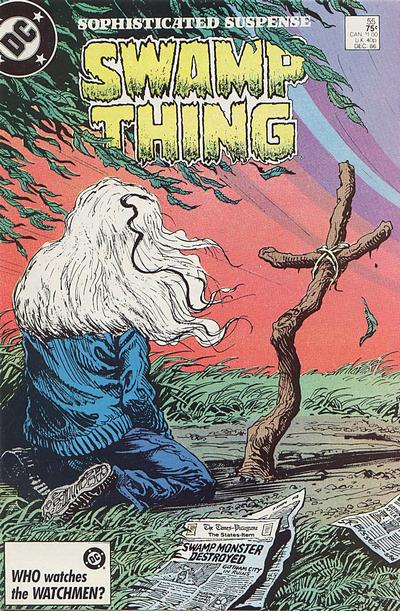 Moore gives us Swamp Thing's funeral of sorts in the next issue as Abby continues to mourn. Weirdly Gotham City creates a monument to the mucky hero, though that seems a bit off-note as well given the immediacy of his attack on the city. Also Abby's reputation seems to have been healed rather quickly as well. One of the truths of such accusations as she faced is that despite their legitimacy they smear an individual regardless. While all this going on we learn that Swamp Thing is far from dead, just very far away on a another planet, one that is blue. 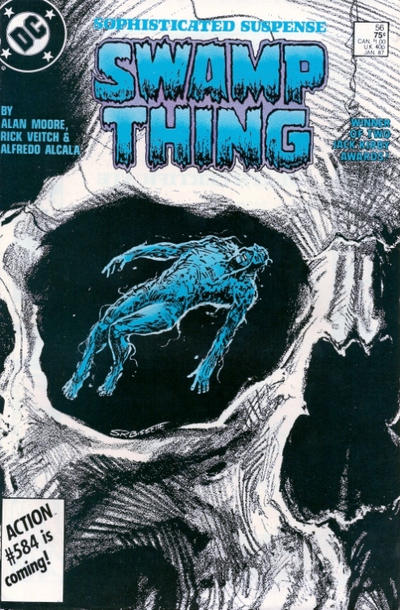 Lex Luthor's plan had been to sever Swamp Thing's connection to Earth and then burn him with napalm. That worked but Swamp Thing in desperation is able to find a place to regrow himself in distant space on a world where there is no green, only blue. In a story which reminded me of Ray Bradbury's stuff, we follow Swamp Thing as he attempts to stay sane by fabricating various activities and even pseudo-people to help him pass the time. It's not ultimately successful and he eventually realizes he must get back to Earth. His journey back will the focus of the next and final volume of Alan Moore's Swamp Thing stories.
Rip Off
Posted by Rip Jagger at 12:00 AM