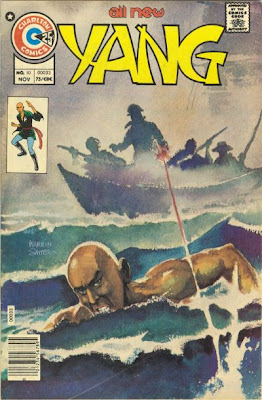 Warren Sattler
Yang Volume 3, Number 10 is dated November, 1975 and was published by Charlton Publications Inc. The editor is George Wildman. The colorful nigh-expressionistic cover is painted by Warren Sattler, and Sattler also did the artwork on the inside of the comic. Joe Gill wrote the script. Here is what else was on the newsstands when this issue of Yang hit the racks.

After a brief summary of the life of Chung Hui, who we know better as Yang, Part One "Partners in Evil" begins with our hero trying to return to San Francisco to perhaps head back to China, where his thoughts have turned to his cousin Sun Yang. He is attacked by Apache John and his partner who wears a badge. He fends off these attacks and escapes on horseback while the man behind the attacks reveals himself as Yang's old enemy Captain Keegan. His plan is to let Yang find Yin Li and let one of them eliminate the other. Yang does find Yin Li, the daughter of the man who killed Yang's father, but not before discovering Keegan's opium shipments. He kills one of Keegan's men and then boards the Shanghai junk which holds Yin Li. They exchange words, and Yin Li threatens Yang with a gun. Meanwhile Captain Keegan and his crew board the junk, killing Yin Li's man. Their attack allows Yang to escape Yin Li's gun and he fights the new enemy.

Part Two "The Target" showcases this battle between Yang and Keegan as the corrupt Captain is kicked overboard. But Yin Li's man Han knocks Yang out and Yang is tied up and whipped by Han for Yin Li's pleasure. But in a moment of doubt she releases prisoner and Yang jumps overboard. He encounters Keegan's small boat and tips it making Keegan fall into the bay. But despite his desire to do so, he spares Keegan's life, but Yang himself is again knocked out with a belay pin by Keegan's men. Keegan thinks Yin Li will try to save Yang and hopes to kill them both when she does so. He hires a killer named Durango to do just that. Yin Li arrives to do just as Keegan predicts and he adds her to his collection of prisoners. Durango moves to fulfill his bargain, but Yang uses the unloaded gun he is provided to defeat his new enemy by crashing it against his skull. A previously arranged explosion by Yin Li's men gives the pair the chance to defeat their foe and after giving Keegan a swift kick to the face, Yang then jumps out of the window as Yin Li shoots after him. He looks back at the junk with regret as the story ends.

"Yin-Yang Mail" offers up three letters, one an erudite analysis of the Yin-Yang symbol and philosophy and the others more typical letters of general praise for the comic. One letter though does say that Yin Li is in too many issues of the comic, and it's pointed out that George Wildman, the editor thought the same thing and had the comic change up the scenario some in recent issues. 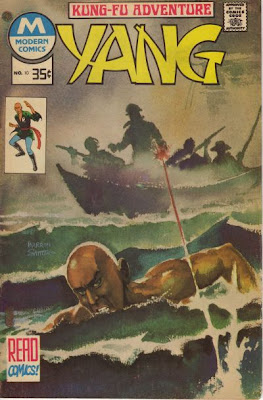 This comic was reprinted in 1977 under the Modern Comics label.

This is another solid issue of Yang, and after a few issues where Yin Li has been largely absent, seeing her again was a real treat. The conflict between her and Yang seemed to have a bit more spark this time, as both have largely given in to the inevitable nature of their love-hate relationship. Captain Keegan is a dandy villain, and good here.

The series really has found its balance now and is delivering solid entertainment. There is a small mention of the companion comic House of Yang, but there must have been some slips in editiorial as the references point to an upcoming series, not one already on the stands.

More to come, as today is a double dose of Yang.