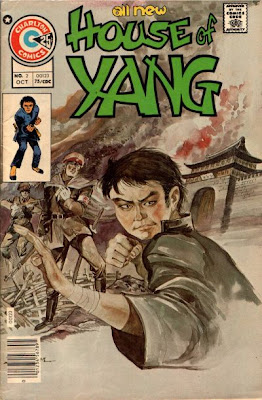 Sanho Kim
House of Yang Volume 1, Number 2 is dated October, 1975 and was published by Charlton Publications Inc. The editor is George Wildman. The cover was painted by Sanho Kim who is also the artist on the interior pages as well. The script was supplied by Joe Gill. Here is a look at what else was on the newsstands when House of Yang #2 landed. 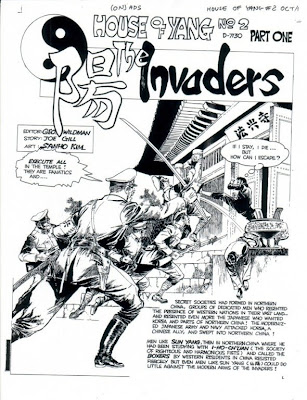 Part One "The Invaders" begins with Sun Yang in the North of China studying with I-Ho-Ch'uan (The Society of the Righteous and Harmonious Fists)when the much more modern Japanese army invades. He fights against these invaders, specifically one particular Colonel whose horse he steals. Sun rides into the country to a village where the Feast of the Dragon is about to be celebrated with a parade. Sun has word of the parade leaked to the approaching Japanese army knowing they will choose that time to attack. They do, and the villagers are prepared. The Japanese counter with a gunboat coming up the river and Sun Yang commandeers a sampan loaded with gunpowder to blow up the threatening craft. But he is taken prisoner and presented to the very colonel whose horse he had stolen earlier. The Colonel has his Sumo wrestler Kajo throw Sun into a cell next to a girl named Yaku and her father.

Part Two "To Die with Dignity..." begins with Sun Yang being pitted against the giant Sumo Kajo. The two wrestle until the Colonel gives Kajo a sword but honor demands that Sun Yang receive one too. The two opponents battle furiously until Sun is able to defeat Kajo with a kick and a savage punch to the face. The Colonel then threatens them all with a pistol but Yaku blinds him and Sun knocks it out of his hand, throwing the Colonel into Kojo. Taking the sword Sun Yang, Yaku and her father escape the compound, but not before taking advantage of some conveniently placed gunpowder to blow up a significant portion of the facility. Yaku expresses love for Sun Yang, but he leaves with her father remarking that he belongs to all of China.

"House of Yang" offers up two letters on the debut issue, both complimentary and both surprised at the fresh setting of China as opposed to the American West. Both express interest in Eva Ku, and anticipate seeing her again despite her apparent demise in the debut. The editors suggest her survival might well be in the cards. 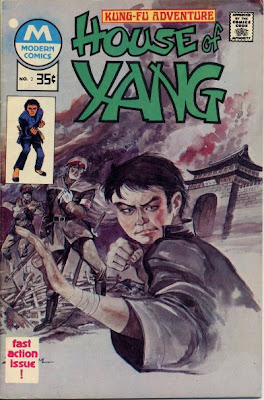 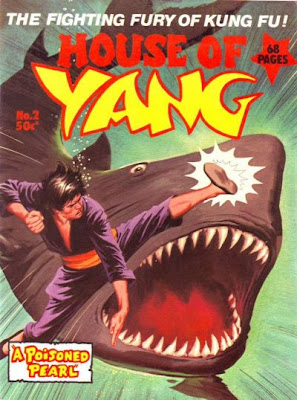 This issue was reprinted in 1978 under the Modern Comics logo and in 1976 by Australian publisher Gredown.

This issue features one of my favorite Charlton covers. Sanho Kim's portrait of Sun Yang with the threatening Japanese soldiers behind him is striking, and the restrained color palette reinforces the subtle impact.

This is a solid issue with great action, all wonderfully choreographed by Sanho Kim. The plot moves briskly and the action is all out. The characterization is subtle and in service to the plot at all times. If any criticism can lodged at this outstanding comic, it's that Yaku might need another scene to develop her personality. There is a hint that she might return in the letters pages, but none in the story itself.

We return to the adventures of Yang himself next time. More to come.