Horror Of The Blood Monsters! 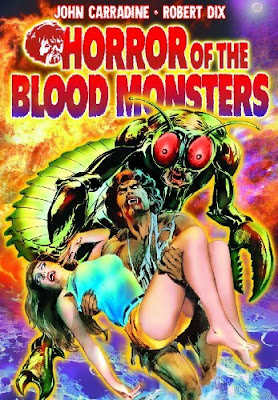 I stumbled across this movie the other day. I'm familiar with it in general terms, but I'd never seen it in its entirety. What a wild and wacky trip man! 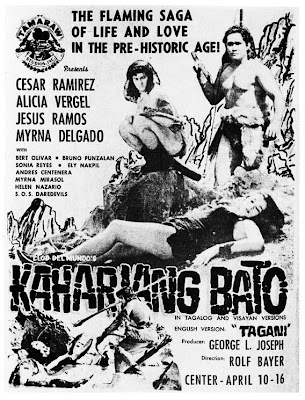 Al Adamson is the director of this "gem", a movie which began as a Filipino black and white sci-fi/horror flick titled Tagani. This movie was bought and blended with new elements filmed by Adamson and others in 1966 and later in 1970 to create a truly bizarre concoction of a flick which offers up a rather peculiar tale of vampires and other monster types on a planet far far away. 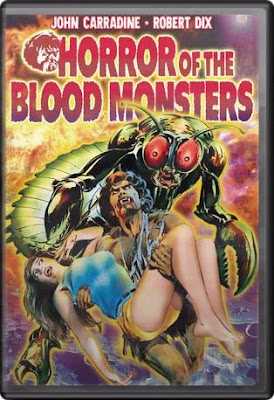 The dvd I picked up came with an outstanding commentary by Samuel Sherman, the guy who in many ways produced and brought this package to the drive-in screens across America. He openly derides the movie for its weaknesses, but praises it simultaneously for being just what it is, a bit of diverting schlock made to make some money and provide some entertainment. It does that in spades.

What Sherman offers up is a lesson in how to produce such exploitation movies with verve and profit. It's not about the movie he says over and over, it's about the advertising. And this movie as some first rate advertising. 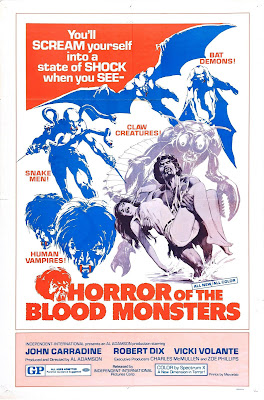 Neal Adams
The Neal Adams artwork on the cover is from the original poster and is vivid and attractive. It shows off a typically heroically muscled vampire clutching a confused babe while a pretty ugly crab creature threatens. This image is much stronger and much more dynamic than just about anything in the movie. 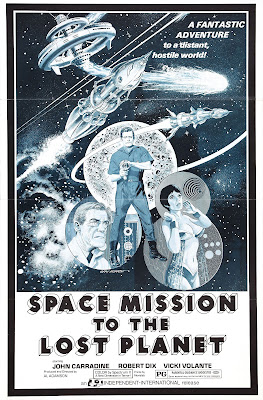 Gray Morrow
Later when the movie was released again during the Star Wars craze the title was changed to Space Mission to the Lost Planet and Gray Morrow was tapped to produce a typically excellent poster. The movie might be a nightmare, but the ad art is superb. 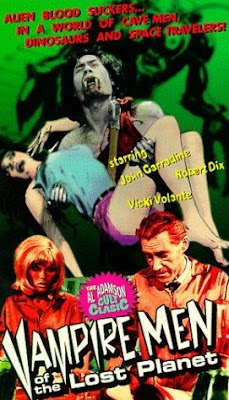 John Carradine "stars" in this movie, but like most of these later appearances he's barely in the thing, sitting often alone in a tired set mouthing some lines needed to thread the ragged elements of the story together. Carradine was the focus of the late 90's video release which used the movie's third official title Vampire Men of the Lost Planet. 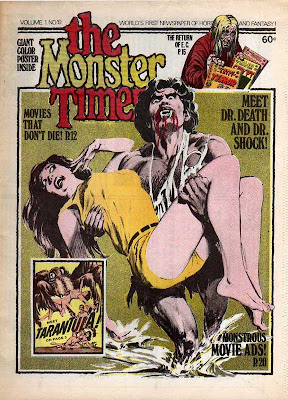 I haven't mentioned "Spectrum-X", a bogus name given to the technique used to describe the way the black and white footage which the Adamson stuff surrounds was tinted various colors (blue, red, yellow, etc.) to give the movie an offbeat tone and make some think it might actually be a fully "color" film. It's weird, I'll give it that. 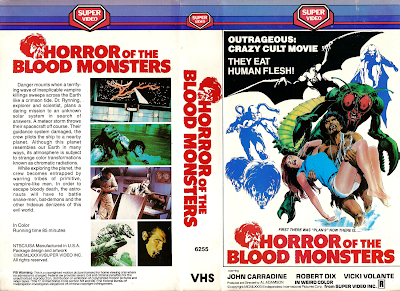 The dvd I have offers up both an English and Italian version of the movie along with the commentary track. There are also several trailers for various exploitation flicks of the time, most having "blood" in their titles. I highly recommend this package, not so much for the movie, which is hardly the worst flick I've seen, but the outstanding behind the scenes information. I love good commentaries and this is an excellent one.