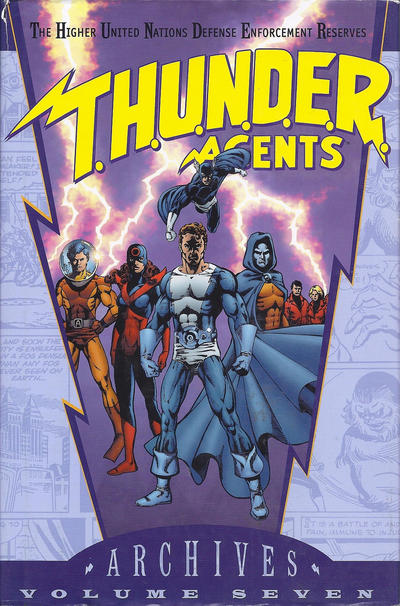 I haven't the strength to revisit the whole meandering odyssey of the THUNDER Agents after their Tower days were done. The saga of their ownership is a confusing and at times quite dark tale. A chap named John Carbonaro got the rights from Tower to publish the T-Agents (although some say that those rights never existed and remained with Wally Wood and afterwards his estate -- it's murky). 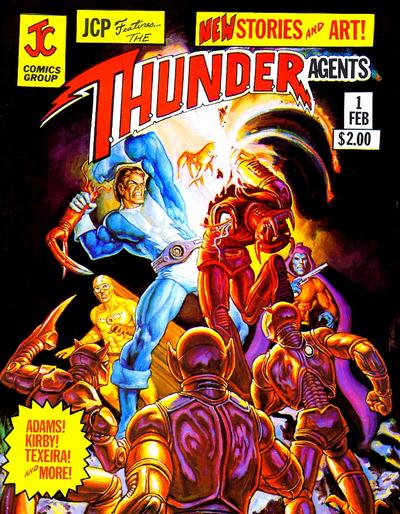 Carbonaro's first foray with the Agents was in the form of a black and white magazine which lasted exactly one issue. It was put together by Pat Gabriele and featured some decent art by Mark Texeira. The Adams and Kirby art advertised was vintage stuff from years gone by. It's not a sterling effort by any means, but it was new THUNDER Agents. 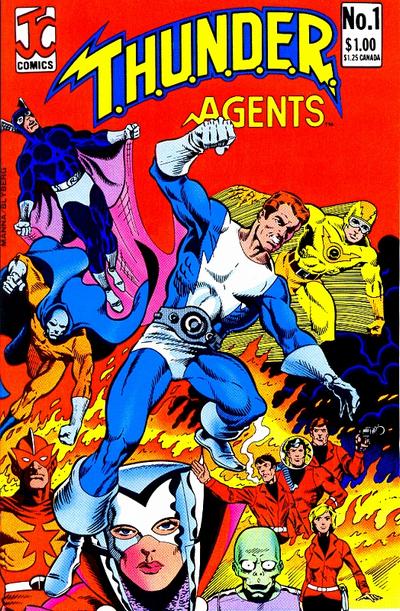 Next Carbonaro took the Agents into the direct sales marketplace under his own brand of JC Comics, We got a few new tales of decent quality and a reprint series. Somehow this was tied into Archie Comics and the short-lived run was finished under their banner in an issue of Blue-Ribbon Comics. 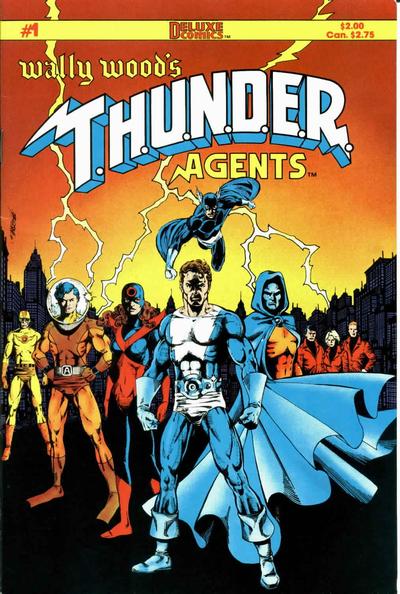 And that brings us to Deluxe Comics, the stories reprinted in the seventh and final volume of DC's THUNDER Agents Archives series. Another fellow named Dave Singer and former associate of Carbonaro claimed that the Agents were in public domain and set about to use them in a brand new spanking line despite Carbonaro's objections and eventual lawsuit. Singer seems to have been a dodgy character at best and though he promised big money to big name talents such as George Perez, Dave Cockrum, Keith Giffen, Steve Englehart and others his promises were more impressive than the reality. 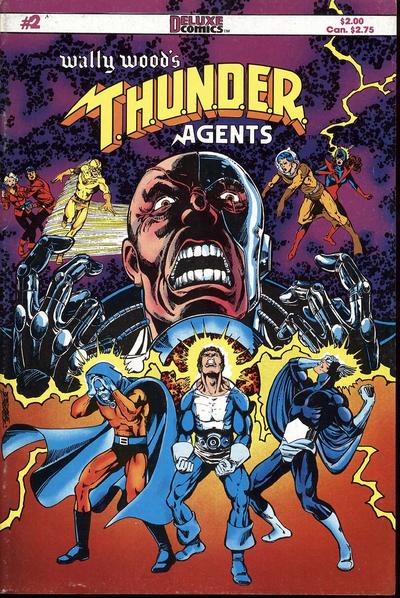 So after a couple of stunning issues the talent began to walk away and the books trudged along. There are some really sweet stories in these, such as nifty hard-edged Raven stuff from George Perez, fan-pleasing artwork from Dave Cockrum and some really weird but fascinating stuff about Lightning by Giffen. There is a definite grimness to some of it, but for the most part the characterizations rang true since most of the creators were drawn to the work by their fondness of the original Tower Comics. The storylines even recognized the old Tower days and built upon them. 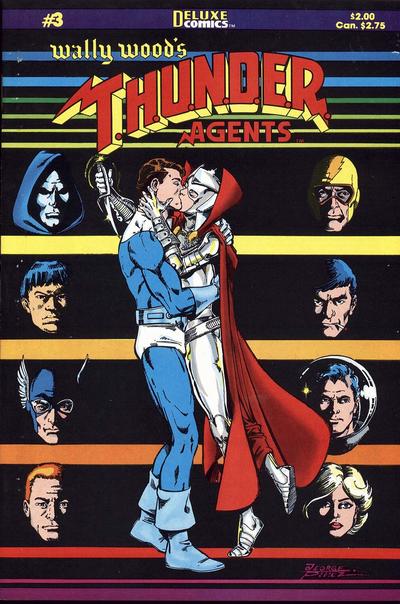 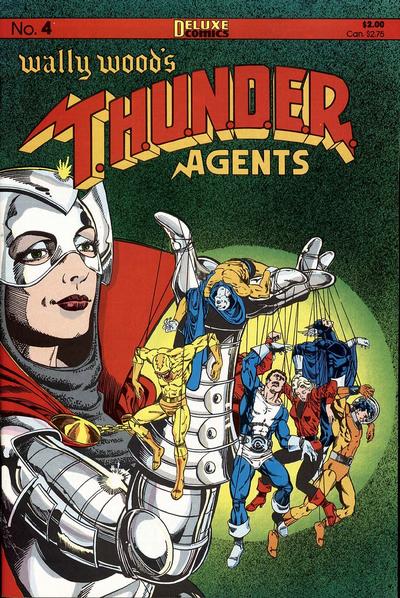 Despite great covers right to the end, the books insides became less and less impressive. Though Perez is still around there is even in his art an unfinished quality. 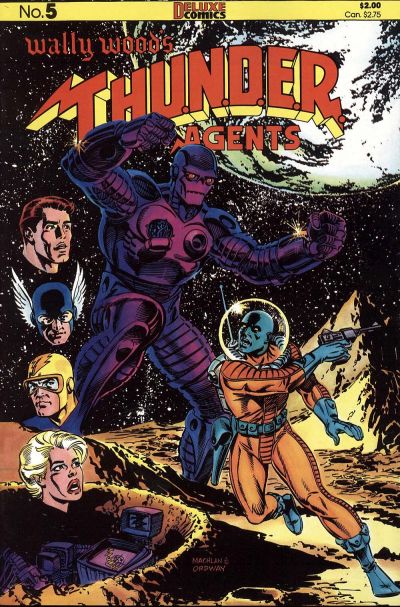 The fifth and final issue has some Jerry Ordway art and its quite handsome and the story picks up embers from the Tower days yet again, but it's too little to late. Other stories in this issue are not nearly so professional in their aspect and the writing seems to be handed off to lesser known names. Singer's venture falls apart even as his claim to the Agents turns to ashes in the courts. 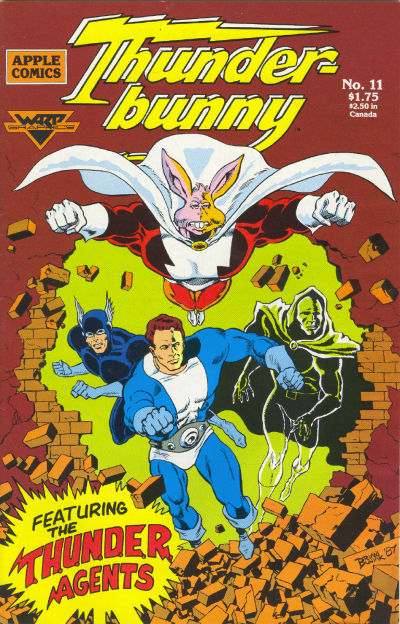 The THUNDER Agents tumble around for several more years becoming guest-stars in several Indy books before Carbonaro is able to land a deal (of sorts) with Bob Guccione's Penthouse outfit. 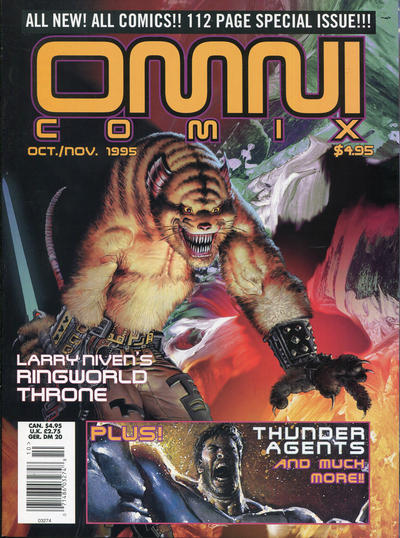 He has a guy named George Caragonne in charge of them now and he  proves another less than reliable fellow. There is a stunning story done with Paul Gulacy and Terry Austin but only the first chapter of three ever sees publication in an issue of Omni Comix due to the suicide of Caragonne among other factors. The Agents are in limbo yet again  until many years later DC picks them up and later still IDW takes a stab at them. 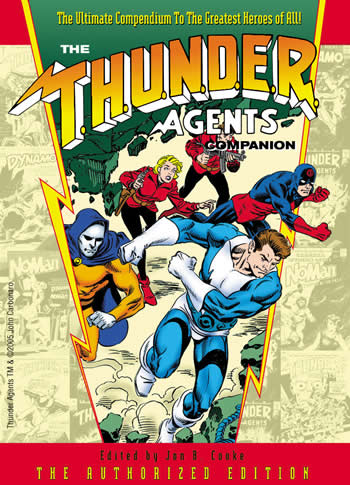 A few more pages of the Gulacy material gets published in The THUNDER Agents Companion from Twomorrows but it's still less than satisfying not see the whole story, which may or may not still exist. This Twomorrows book has been a ton of fun to read as I've tumbled along with the Agents on this read. There are many many interviews and profiles of the talent involved with the creation of the T-Agents over the many years. The book is a bit out of date now having been published in 2005 or thereabouts. But it still makes one hunger for more good THUNDER Agents stories and I for one believe there are more of those to tell.
Note: Only the Deluxe material and the single story for Omni Comix is included in this particular Archives edition.
Rip Off
Posted by Rip Jagger at 12:00 AM