The Best Of The Three Stooges Comicbooks Volume Two! 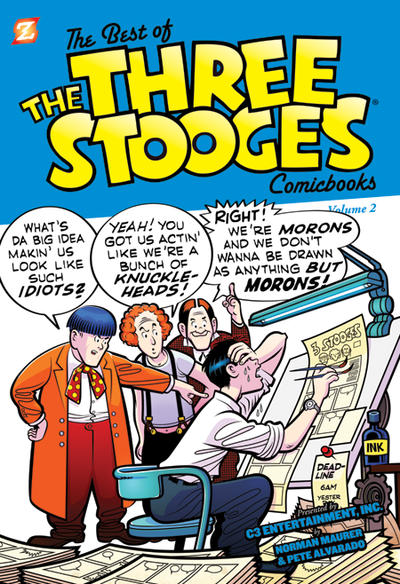 The Three Stooges are almost considered a guilty pleasure these days with shows which are riddled with violence such as theirs were are verboten in many households. Clonking your mate in the forehead with a claw hammer is seen as behavior that children should not be exposed to. I can see the argument, but then if I followed those rules I'd never has witnessed the lunacy of Curly when he becomes enraged by "Pop Goes the Weasel" or Larry when he thinks he's safe only to be cracked on the noggin by the backswing of Moe's ferocious blow. Moe himself administers the punishment but in grand Karmic order gets hoist on his own quite sharp petard from time to time too. The Stooges were violent, but they were also funny. People disagree about that, but I think they are funny. 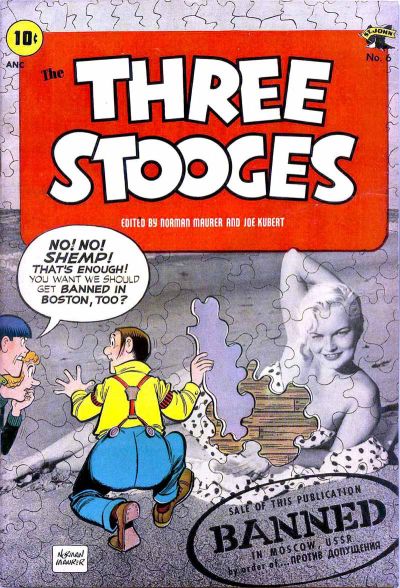 The second of two Papercutz volumes offers us the last two St. John Three Stooges comics from the hand of Norman Maurer, then the partner of Joe Kubert who was doing Tor for St. John. The duo brought a new 3-D process to St. John and it was a major winner for a very short time. But despite such fads comics were being dragged down by many factors, not the least of which was much public pressure on comics not to damage the precious American youth. Saucy covers like the one above probably didn't go very far to help arguments to the contrary, though I admire it mightily. 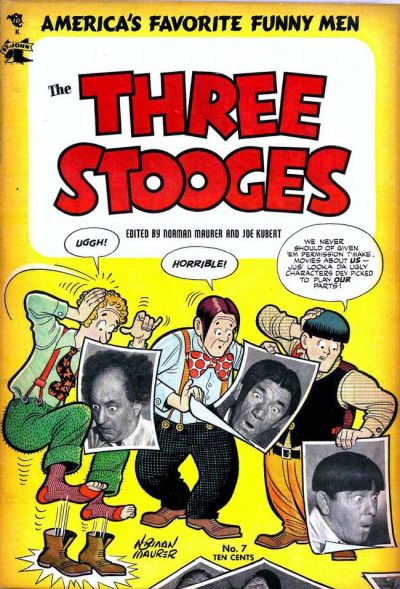 Throughout all of the Stooges misadventures in the St. John books was a nemesis created just for the comic -- one Benedict Bogus who was a con man with more ambition than talent and who almost always suffered when he tried to snooker the Stooges. In fact some of the stories focus on Bogus with the Stooges being mere background players. L'l Stooge is not represented in these last few issues. There are some fun stories, even one which recapture to reprise that "Pop Goes the Weasel" yarn from the very beginning of the Stooges famous run in film shorts. 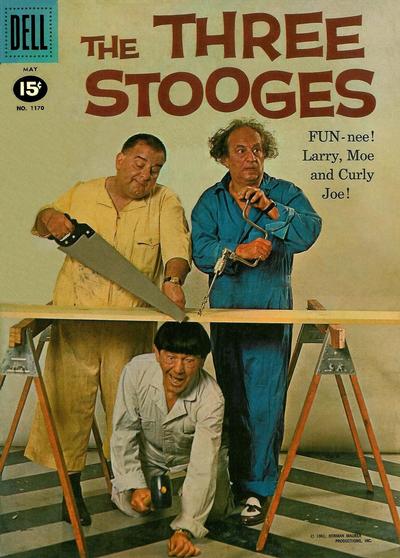 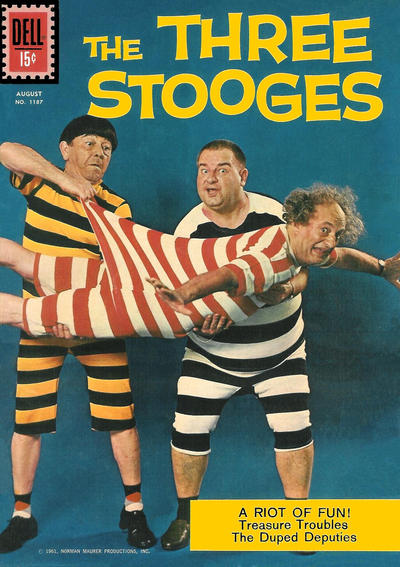 There are also two more Dell issues of Four Color starring the Three Stooges. The artwork in these two issues is by Joe Messerli, another talent who worked both in comics and animation. Part of the third Stooges Dell Comic is also included with more work by Pete Alvarado. This story was pushed out of the first volume due to space I reckon. Again these lack the heft of the Maurer comics, but are fun breezy reads with some nifty gags. 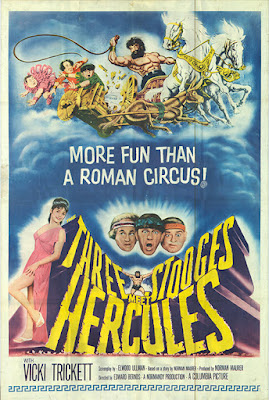 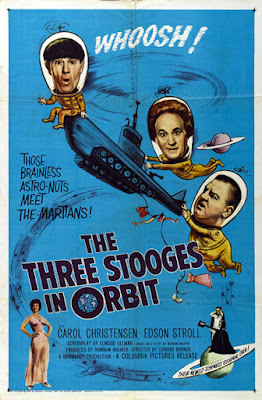 Following his work on the Stooges comics Norman Maurer became more involved with the Three Stooges in their film work and even attempted to get the trio onto television. At about the same time as these Dell issues were coming out, there were new feature-length movies with the Stooges prompted by the popularity of the trio on TV when their old film shorts started showing up. 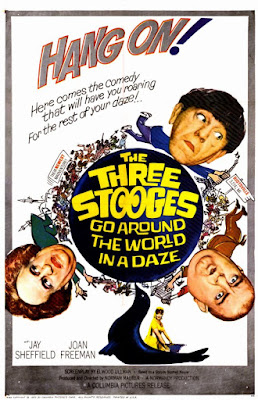 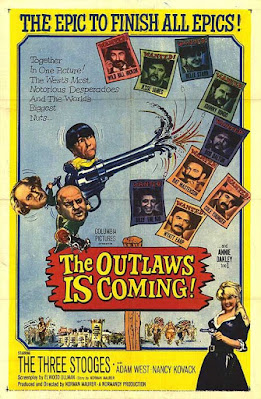 Maurer was a screenwriter for four of these movies and directed two of them. Frankly the ones he wrote and were directed by Edward Berndt are funnier than the ones Maurer directed himself. He's said in interviews that he didn't like directing. The gags are there but the pacing is missing.  Eventually the rigors of age and the fading of interest caused the The Three Stooges to hang up their spurs at last. 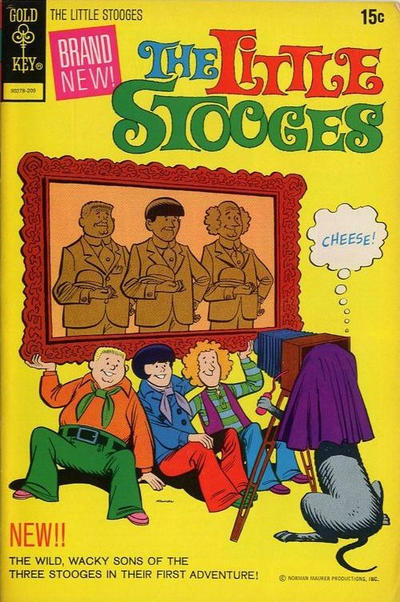 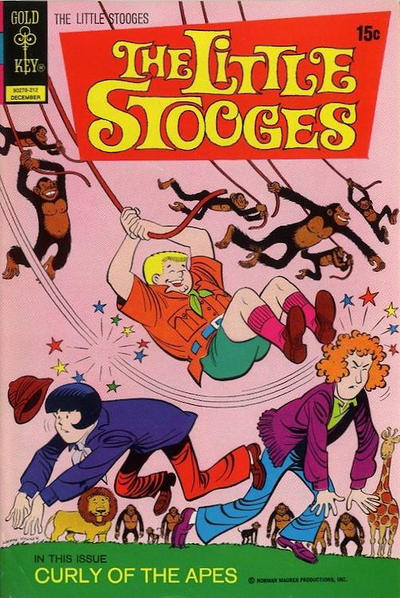 But it was not quite over for Norman Mauer yet. In 1972 Gold Key came out with The Little Stooges, which ran for seven issues or so. It was written and drawn by Maurer and his son and featured the sons of the original Stooges who do have cameos. The sons are identical and go by the names of Moe, Larry and Curly just as their fathers had done. These are lively comics and Maurer's craftsmanship has not slipped. It's too bad Papercutz had not done at least one more volume, maybe two to get all of the Stooge comics back into print.
Rip Off
Posted by Rip Jagger at 1:00 AM