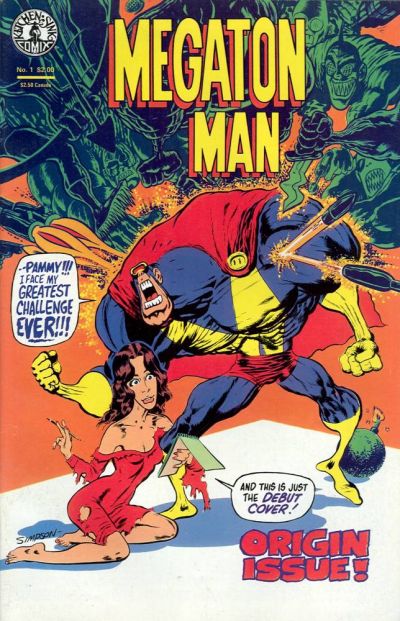 Don Simpson's Megaton Man erupted from Kitchen Sink in 1984, a wacky send up of superhero comics and a rowdy and sharply crafted melange of elements which seemed not only to poke fun at superheroes but also the audience who craved them. The first issue looks like a lost issue of Marvel's old parody book Not Brand Echh which itself was a "Marvelized" version of the vintage spoof comics in the MAD comics vein. Simpson's artwork evokes a Jack Kirby feel with a strong dose of Jim Steranko worship. There is frankly little of Simpson's own distinctive look in these earliest efforts.

The first issue begins in media res as Megaton Man (the Man of Molecules), a drippingly rich satire of an overly developed superhero returns from a mission in the past in the middle of the downtown skyscraper headquarters of the Megatropolis Quartet. So in in a single page we have both Marvel and DC getting barbed and the weird blend continues as we discover motifs from both companies being flung about. There is even a full page send up the classic Doonsbury comic strip which was still all the rage in the mid 80's. There's no doubt this comic book is a product of its time. 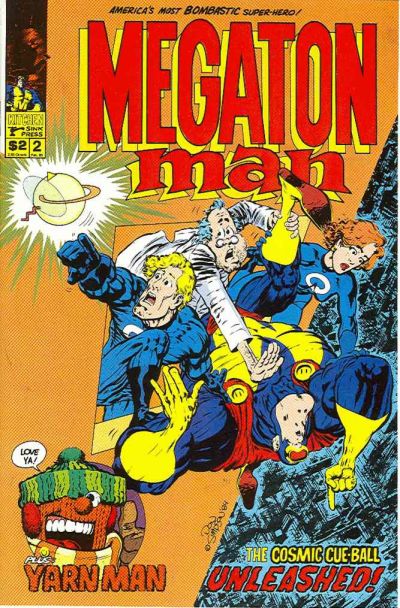 The second issue of the series continues in much the same mode as the first. We get a closer look at the Megatropolis Quartet made up Liquid Man, the Human Meltdown, Yarn Man and See-Thru Girl. The main point still seems to be to send up the vintage comics of the Bronze and Silver Ages with outlandish but oddly recognizable villains and situations. Megaton Man (Trent Phloog a bogus secret identity of a "reporter" who works at a paper called "The Manhattan Project") everyone seems to see through immediately and then totally forget) joins the Megatropolis Quartet and but that doesn't really work out as it ought, but still feels like many of the old stories we were reading at the time in mainstream comics. The artwork took on a more purely Steranko feel with some pages and panels evoking him really strongly. 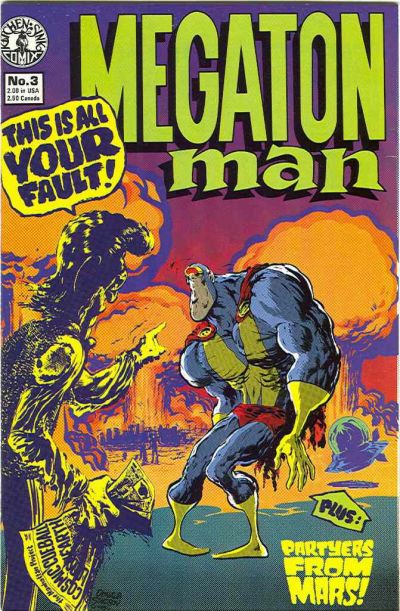 With the third issue we begin to see how the this going to develop beyond the one-joke nature of the premise. The crazy compression of imagery begins to loosen up and we encounter characters who behave slightly more like real people with actual recognizable motivations. In particular the saga of cliched love interests Pamela Jointly and Stella Starlight (See-Thru Girl) go off to discover themselves away from the pawing misogyny of both Megaton Man and Rex Flaccid, the Liquid Man. College is seen as the place to do that, but it too comes under a withering indictment as the absurdity of the endeavor is explored. 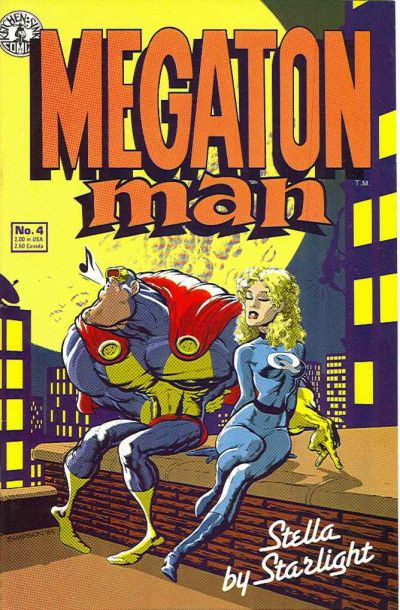 We begin to get a sense where this series is headed with a story which folds back into the history of both Megaton Man and the Megatropolis Quartet to show hour Stella Starlight is disenchanted with her marriage to the cold and sometimes cruel Liquid Man. We also are introduced to I.C.H.H.L. a parody of S.H.I.E.L.D. which stands for "Ivy Covered Halls of Higher Learning" and the series begins to shift its focus more to a satire about college life and the alternatives. We also meet Wall Man a spoof of Spider-Man who comes to the offices of The Manhattan Project to pick a bone. Lots of stuff is folded into the series at this point, all of it with a decided sense of Steranko grandeur. 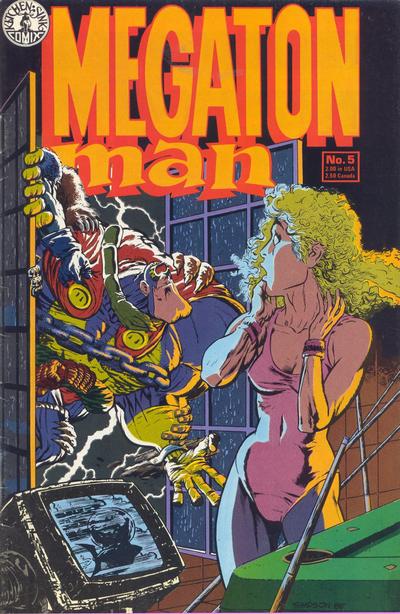 The next issue is a more detailed look at the romance between Stella and Megaton Man and the consequences of that which strike so close to reality that the veneer of a comic merely dedicated to spoofing superheroes is starting to shred in significant ways. Simpson's own personal art style in this issue is starting to break through a bit as the homages to Kirby and especially Steranko diminish. 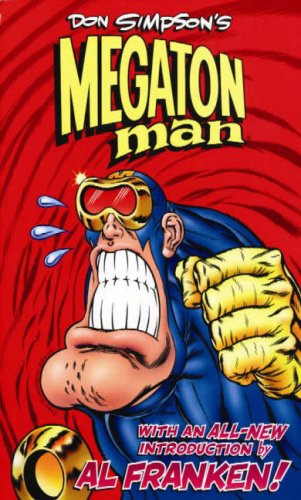 These first five issues of Megaton Man are worthy comics, coming from a talented newcomer who uses these pages to pour out his interests in torrents which if anything so enrich the pages that getting it all in a single pass is unlikely. Like the great "chicken fat" style of Will Elder, this comic though drawing influences from other sources has that same intoxicating density.

And I haven't even mentioned the "Partyers from Mars".

Man of Rock , the biography of Joe Kubert by Bill Schelly was written when Joe was still alive. That's a great thing and speaks to th... 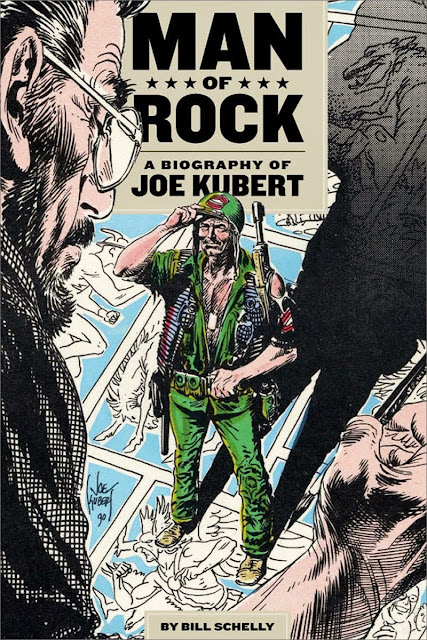