World Of The Dragonlords! 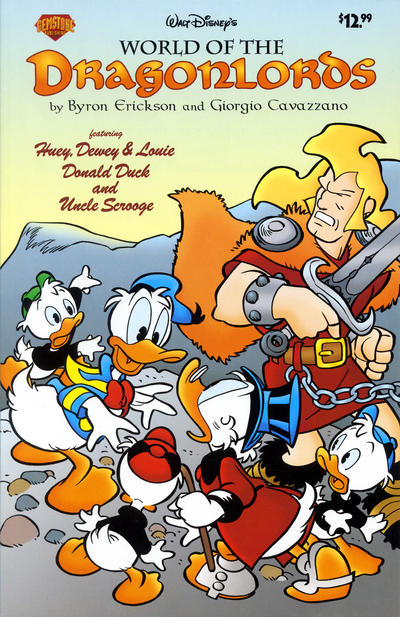 World of the Dragonlords has been sitting in a box in my collection for years and years waiting for me to finally get around to reading it. I was a big fan of the Gemstone operation which for a time put out the Disney books. I found the packages they produced both professional and highly entertaining as well as enlightening. I have not been much of a Duck fan in my reading career, but it was great fun to bone up on the doings of Duckburg and beyond for a few years. I picked up this volume on whim but never got around to reading it...until now.
This is a fantasy tale by Byron Erickson, a writer and editor for the Disney books and it first appeared (as did much of the Disney material) in Europe where the comics have long been a steady and reliable product. The artwork is by Giorgio Cavazzano, a master of the craft and a venerable "Duck" artist of long standing. His take on the classic characters is different but no less compelling than the classic "Barksian" variation. In this tale the Duck clan is whisked away into another dimension where human beings are put upon by a race of warlike creatures called the "Morg". Humans are enslaved by the Morg who maintain their superiority by using dragons to compel the populace to obey. 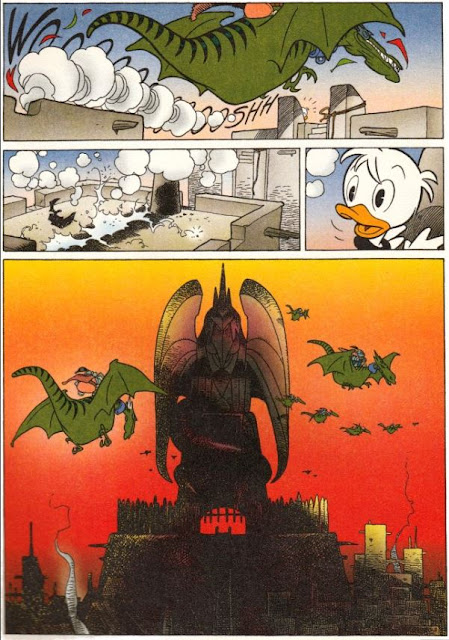 In this tale we follow the Ducks as they work both together and independently to help end the Morg threat. In alliance with the humans, especially a kid named Jute who works in the Morg city in an underground capacity and Brenden a classic chisel-cheeked hero who inspires and leads beyond the gates of the Morg city. The focus is on Huey, Dewey, and Louie who are separated from their Uncles Scrooge and Donald and end up taming three baby dragons of their own. Meanwhile Donald works to sabotage the Morg weapons and Scrooge develops a scheme to end the Morg threat once and for all.
It's a brisk entertaining romp divided into twelve chapters telling the story of our heroes. There are little one-page vignettes telling what's happening in Duckburg while our heroes are away. There are ups and downs quite literally and figuratively as well, but it will be no surprise to suggest that good will prevail in the end. The penultimate chapter is presented sans words with only a few exceptions and works remarkably well. This is delightful romp in a classic fantasy setting and it will come as no surprise I suspect that the duck fit right in.
I'm glad I picked  it up all those years ago.
Rip Off
Posted by Rip Jagger at 1:00 AM