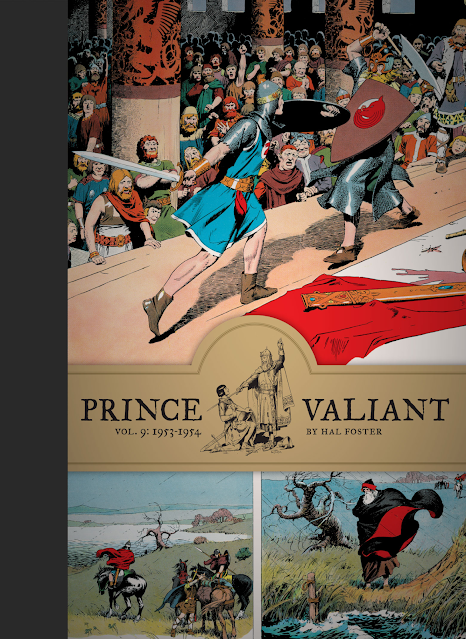 Christianity! If I had to choose one thing which dominated the themes of the Prince Valiant comic pages in the early 1950's it would be Christianity. No doubt a comic strip about a pagan Viking noble who in his earliest days dressed up like a "Demon" and who roamed the wide world of the later Roman Empire in the never-never land surrounding Camelot might be a target for Conservative voices looking for a new target to pillage in a crusade to cleanse the American zeitgeist. If comic books were destroying the soul of the American child is it too much to imagine that the Sunday color sections were likewise up to no good. But when they might look at Hal Foster's venerable Sunday page there would be little to argue about. 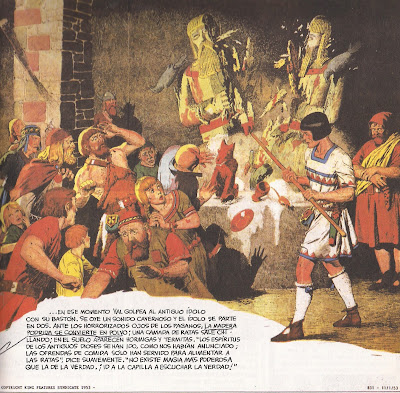 This collection begins with Camelot under siege by pagan Anglo-Saxons and in the course of defending against this savage horde we have the scene above in which Prince Valiant destroys a pagan idol. Valiant had recently brought missionaries to the region to bring Christianity to his father's kingdom and as it turns out King Arthur's knights were god-fearing lads. So pushing back the shadows of the older religions and faiths is consistent with this new way forward. The people need not just physical freedom offered by Camelot but also spiritual freedom brought by the word of Jesus Christ. 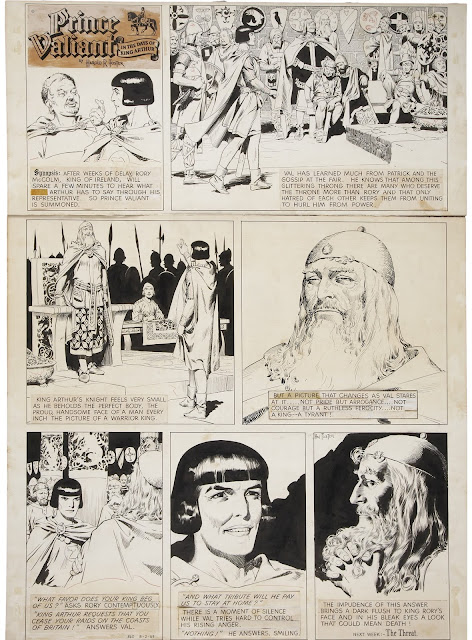 Later Prince Valiant heads to Ireland to take up arms against another pagan king. His wife Aleta heads off to the Misty Isles with his children to follow up on rumors that the land she rules from afar has fallen on difficult times. She finds a land being militarized by the consort of her sister the regent and takes a number of wily steps to bring back the calm peaceful ways of the islands who have long lived in in accord with their neighbors. Valiant and Sir Gawain soon join her and help to bring back the old civil order. 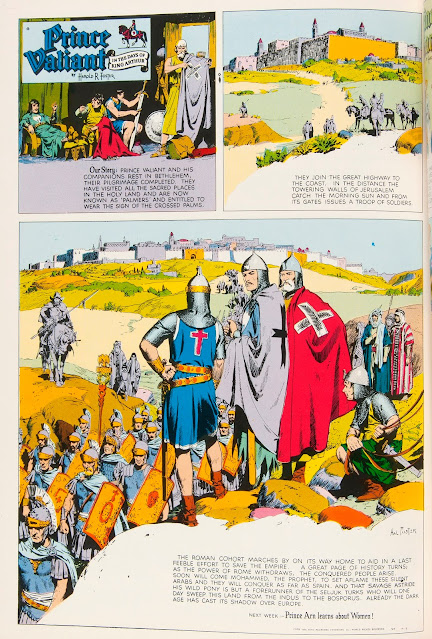 This collection spends much time on a pilgrimage made by Val and Gawain to the holy sites of Christianity in the territories in which the Roman rule is beginning to end. The match wits with both Arab and Syrian leaders who want to kidnap and later merely kill them. But it's important they become what are called "Palmers", those who have shown their fidelity to the faith by seeing the holy sites. All this time Valiant's children keep  growing, especially Arn who makes friends and mischief in equal measures. The collection ends with the Misty Islands restored and the family united on the way back home.
Rip Off
Posted by Rip Jagger at 1:00 AM