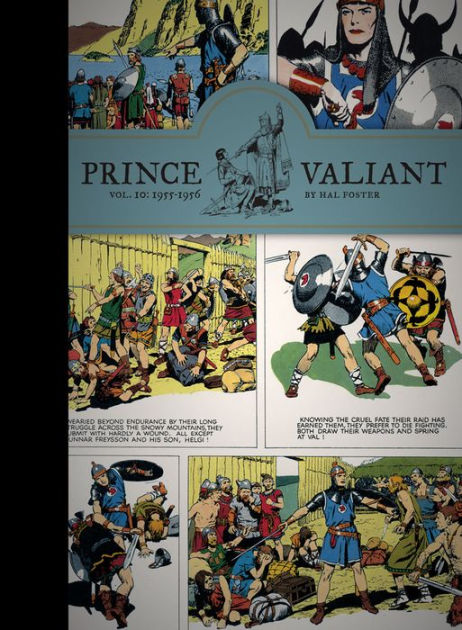 The tenth  Prince Valiant collection from Fantagraphics covering the Sunday pages from 1955 and 1956 are about transitions. The saga picks up as Valiant and his family consisting of with wife the Queen of the Misty Isles herself Aleta, and their children Arn and the twins Karen and Valeta. The family along with their retainers have just left the Misty Isles were Aleta has set things right again and staved off a revolt. Now it's off to home but they find the sea lanes proving too dangerous as well as the trek through Western Europe. So paying heed to Aleta's handmaiden Katwin they decide to cross the Aegean Sea and go up the Bosporus through Constantinople where they gather a crew of Northmen to head further up into Eastern Europe. They have many harrowing misadventures and are attacked many times as they are forced to struggle against long portages. But finally and at last they succeed. 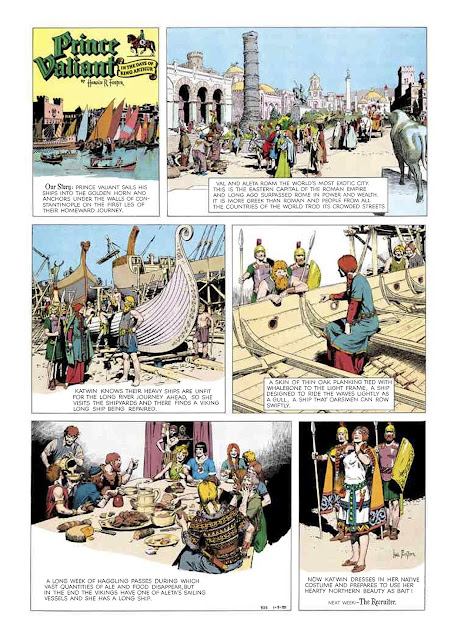 Along the way Valiant is injured more than once and during his rehabilitation he regales his children with tales of his own youth and we are treated to modern retellings of the earliest Prince Valiant yarns where the young prince find Sir Gawain and eventually Camelot and must save the day by dressing up as a demon. After he's healed the focus of the strip shifts slightly to Prince Arn who has become a sturdy young boy eager to prove himself to his accomplished parents. Eventually they come home to Thule and there they rest for a brief time. 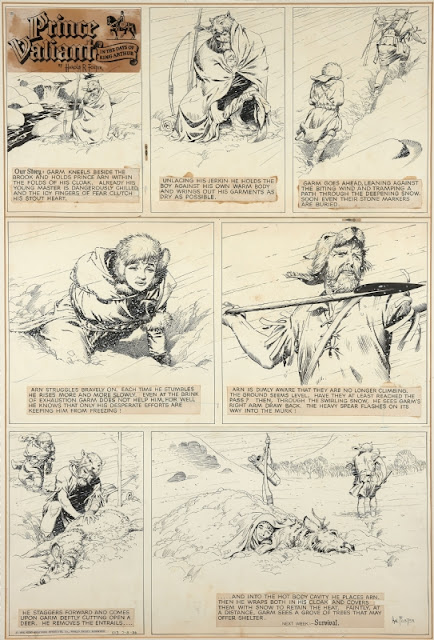 Valiant's father sends his son on a mission to find new territories for the growing population to inhabit as famine looms. Valiant does so and it give Arn a chance alongside the reliable and venerable hunter Garm to climb his first mountain alone. He learns though that every accomplishment only brings on new challenges when from his summit he spies even greater peaks. There is an uprising in the settlement of a friend and invaders threaten Aleta and Katwin and pillage. Valiant is instrumental in putting down these criminals and attempts to right this powerful wrong. Arn and Garm go on another mission to find a safe passage through the mountains for a proposed road and are forced to suffer through a massive snowstorm which challenges Garm's woodcraft to the maximum, but they survive and Arn learns more lessons and moves ever so slightly away from the protection of his parents into the greater world. 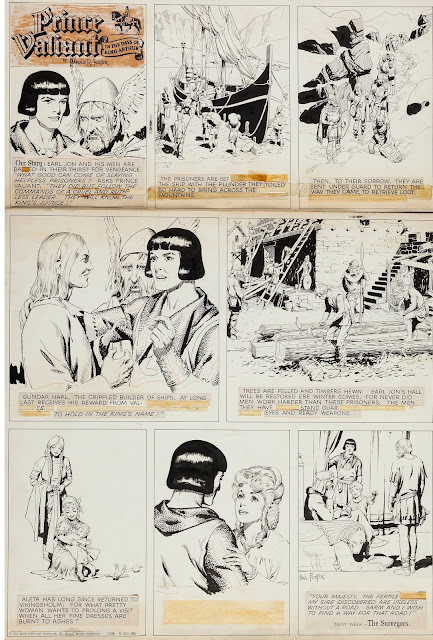 The saga comes to a close with a tale of Camelot and a young knight named Lord Vernon who is coming into his inheritance but before he can do that and wed his beloved bride a snag pops up in the form of a servant named Alfred who it turns out is the first-born heir. In an act of great charity and noble self-sacrifice Alfred gives up the evidence of his claim to save the life of the woman he loves, the woman destined to become his younger brother's bride. Instead he chooses to become Prince Valiant's squire.
And that wraps the year. Both Valiant and Aleta move away from the center of the story for many many weeks. The strip has settled into a steady rhythm with mixes of humor and danger, though the latter always seems less than crucial to the status quo. The stories of others become the places in which we see real change, though change does steadily develop as the children continue to grow.
Rip Off
Posted by Rip Jagger at 1:00 AM